I just wanted to know if it’s in the pipeline or planned at all to offer a sort of access log. Something that would show which apps are trying to connect to which domains. This would be very useful in setting up other tools within the network to block those domains since that feature is not yet available. Also I believe it would give much more granularity to the users control of their traffic. Even if it’s just a text file that you can download from the application with timestamps.

Are you talking about our Windows app or our Android app?

For Windows you can show which apps are trying to connect to which hosts, and those hosts resolve to domain names. Click on any app to see the top hosts it is connecting to. 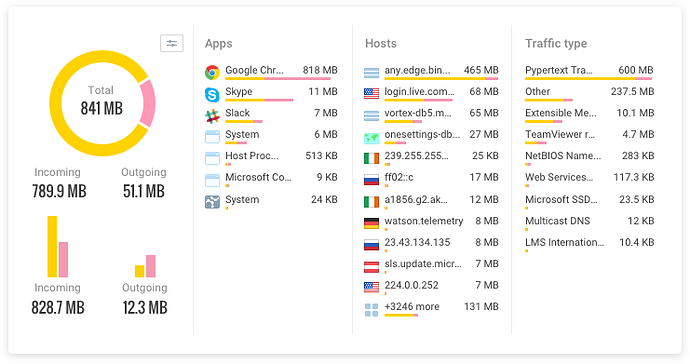 I am thinking you mean something different though and I am just not understanding?

Sorry for the super late reply, I meant to add this as an example.

Something like this gives users more granular control if they can see each connection attempt not just “This app has tried to connect to the internet” I know it’s unlikely but something like this would be super useful on both platforms.

Thanks! Are you running Android Pie on that device? I ask because it is more restricted on what APIs you can use. I’m not sure if that app you posted works on Pie or not.

This device is my one plus 6t running android pie 9.0 with their oxygen os. The app seems to run perfectly though it’s over a VPN connection which I believe glass wires firewall uses data usage manager.

Also side note would something like this be possible on windows glasswire?

Wasn’t sure if this was possible within glasswire or if the type of firewall you’re implementing is too different. I think I worded my last response poorly.

It’s possible for us to do anything any other Android apps do. The main issue lately with Android Pie is that many phone types kill background apps. The more features we add the more likely GlassWire will get killed by your phone.

We’re working on a complete redesign of our app that should be out in the late summer or early fall. That update makes GlassWire for Android much lighter so we can then look at adding more features.

It’s not just us with this problem with Pie phones. https://dontkillmyapp.com/problem All background apps are getting killed and it makes it difficult or impossible to make apps with a lot of features that use many resources.

Ah yes I get ya, from what I understand you’re saying the more resources the app takes the more likely its the target of battery saving.

So my question is since the glasswire app doesn’t rely on a VPN connection for its firewall can it replicate this log I showed above? I figured since you guys use a different firewall type it wouldn’t be possible. Though I may be wrong just really interesting. If you want to check out the app I showed ill link it here.

Firewall WITHOUT ROOT. Host name/domain name filtering, simple interface, fine-grained access control and no suspicious permissions on the firewall app itself. * TO LTE USERS * NoRoot Firewall may not work on LTE because it NoRoot Firewall currently doesn't support IPv6. I'm working on the fix. NoRoot Firewall requires NO ROOT. It protects your personal information from being sent to the Internet. NoRoot firewall notifies you when an app is trying to access the Internet. All you need to do i...

A really interesting concept I just love the idea of this ability from a Dev that I trust. Not to mention understanding when apps check back in is very nice to know how intrusive they may be.

I really appreciate your patience with all my questions

GlassWire does use a VPN for its firewall.

Anything is possible and we’d love to show hosts and I want this for myself also, but if our app is getting killed all the time then the app is completely useless. We’re kind of stuck due to these new Android Pie battery saving features. Therefore we’re going to rewrite our app completely then go from there and see what we can do, one thing at a time.

But to answer your question… yes we can do anything and we hope to add the ability to see hosts in the future. We are limited by Android itself though.

I appreciate all the help ^^