You may have seen https://forum.glasswire.com/t/scrolling-curiosities-in-alerts-list/3779…

I just figured out another tiny detail that makes my viewing of Alerts difficult, this time in v2. When I’m trying to move a page up or down by clicking the scrollbar above or below the thumb, the active area is offset half the width of the scrollbar to the left of the visible vertical line. The visible line is about half the width of a normal Windows scrollbar, as is the active area. Mouse clicks in the right half of this narrow gray line are ignored. Clicking half a width to the left of the gray line still actually scrolls! I can’t believe this is intentional…

Now that I know this, I can aim for the left edge of the gray line, and my clicks work every time. No more wondering why half of them fail…

I read your comments several times, but I’m not sure I get it.

Could you post a screenshot of where I need to click/scroll to recreate this with GlassWire 2.0.84? I can then report the bug so we can fix it.

If you don’t want to post your hosts/apps to the public you can email it https://www.glasswire.com/contact/.

I don’t have any tools that will copy the pointer into a screenshot (that I know of…) I just drew an example - kind of tacky, I didn’t remove the white background from around my black arrows - but if you just look at the relationship of the black arrows to the gray line, you should see what I mean. It is like the hotspot of the arrow is offset about six pixels to the right of the point, but I’ve checked in other apps and Windows and it is perfect everywhere else.

This would be much easier to see if your graphics were not so fashionably pale. Someday you will be old, and maybe understand… Looks like the “Skins” only affect the colored bits, no effect on the grays. Please consider a “high contrast” theme for those of us who don’t have modern eyes. 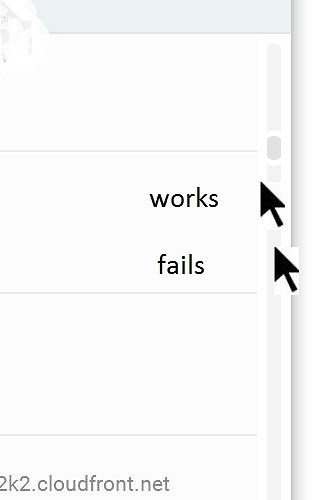 Can you confirm what exact window this is? Is it the “Alerts” window? For me, the scrolling works identical to Firefox even when I place my arrow exactly where you placed yours in the screenshot.

Yes, it is the Alerts window. I just tried it again, and the active area for scrolling is still displaced about half the width of the 225 gray line, to the left. In my Meazure app, it clearly shows the cursor hotspot several pixels left of the line, in the 255 white area, and it is still scrolling. And the right half of the gray line does not scroll.

There is also a vertical offset on the thumb - it will scroll down if I click one pixel below the drawn thumb (if I remember to click the left edge of the line). But to scroll up, I need to click about ten pixels above the thumb. Harder to tell, but I think the same vertical offset affects the top and bottom ends of the whole scrollbar.

I confirmed that if I point back and forth across the divide between “Apps” and “Type”, the pale highlights appear and disappear exactly on the expected boundaries. Windows knows where the hotspot is…

The same offsets happen anywhere the narrow gray scrollbar appears - in Firewall, in the Graph or Usage -> Apps list… But all other elements see the hotspot exactly where it is expected.

Have you tried a HiRes screen that does Win 10 screen scaling? That’s the only thing I can imagine that might be affecting me differently. But since it doesn’t happen on any other interface element, it must be a problem with that particular scrollbar code.

I just thought of another possibility. Have you tried with your Windows 10 taskbar on the left instead of the bottom? (Touch is deadly with a bottom taskbar…) I see a lot of apps that do the position conversions wrong with a left taskbar - but usually it is the whole app that is offset, and usually it is the width of the taskbar, or the unscaled width…

Just for grins, I tried the scroll bar on the Alerts screen. I get the same behavior (regardless of whether the task bar is on the bottom or on the side). When the pointer is set right on the scroll bar, it doesn’t work. When it’s slightly offset to the left, it does.

Oh yeah, the contrast on that screen is awful. Really, Really Awful.

Thanks. What kind of monitor do you use? Is it high DPI? Mine is not high resolution yet.

Hi Ken: I have two Samsung “SyncMaster 213T” monitors, 1600 x 1200. When I speak of contrast, I’m talking about the Alerts screen and the bars. There’s very little difference in the color between the bars I’ve touched and the ones I haven’t. The problem (minor, I admit) is that if all the bars have been touched, it’s hard to tell if that’s the case. I sort of think “well, that one is a bit brighter”, but when I touch it, it doesn’t change … cuz it’s already been touched. I hope this is reasonably clear …

Thank you. Our team is now trying to recreate this bug so it can be fixed in the next update. I feel frustrated I can’t recreate it myself on my own setup, but hopefully our team can figure it out.

Sorry for the problem and thanks for letting us know about this issue.

What? The items change color when you’ve touched them? I’ve never even noticed! Would be handy to instantly know if you’re looking at old ones.

Thanks for confirming the odd cursor offset!

Yeah, they do Loren. Next time you see you have an alert, touch an item. You will see it darken just a tiny bit. You’re right … it IS handy!

The cursor offset thing is annoying for about half a second, then I forget it. I think I’ve just been attributing it to the scroll bar being so skinny. But once you mentioned it, I checked it and there’s definitely an offset.