An Interesting GW Surprise This Morning

When I booted up my system today (I always shut down completely at night), and as I was reading email, Glasswire popped up two “first-access” alerts. They were for my wireless router and for my computer’s wireless adapter. I opened Glasswire and saw that my GUI size and appearance settings had reverted to the GW default, light theme. All of my other settings seemed to be OK, however. After resetting the appearance settings, GW seems to be fine again. I am running a test version 2.2.204.

Do you use any “cleaning” types of software that run automatically?

If anyone else has this issue please chime in. I run GlassWire 24/7 and I will ask our QA to investigate. Thanks for your report.

The only things that appear to be cleaning-related that ran during the hour of my login were CCleaner and CCleanerEmergencyUpdater. Upon my checking around the time of my login on other days this past week, I see where those two files also ran around the same time as my login, or sometime just afterward, on all the days checked. (Maybe it’s just “phoning home” checking for updates?) This was the first and only time the GW settings changes have happened, however. Thanks.

I actually had something similar happen! I was doing stuff on my PC that required a bunch of rebooting and a couple times after I booted back up GlassWire reverted, for me, to the Asphalt Dark theme. I believe my internet was disconnected at least a few times it happened but I’m not 100% sure.

All of my other settings were kept, I am using default GUI scaling so I didn’t see a change here.

Interestingly it doesn’t seem to happen very consistently, shortly after that I was rebooting again a bunch of times and nothing changed.

Could you white list the programdata/glasswire folder with CCleaner? If our files are deleted then GlassWire can act strangely and fail to work properly. This isn’t just a problem with GlassWire but it can happen with any application that has its files deleted by a “cleaner” app.

Let us know if it happens again! Do you also use a “cleaner” app that can delete files, or no?

I am using no cleaner app besides the built-in Windows Disk Cleanup functionality, which shouldn’t touch registry or non-Windows software at all. I am also pretty sure that I didn’t run it around the time the bug happened, and for sure not between the multiple reboots where it reset. I haven’t experienced it since then through multiple reboots.

Windows Disk Cleanup should cause no issues with GlassWire.

Instead of starting a new thread.

I can’t remove this from the Inactive list? Is that a concern? I don’t use Windows Defender. 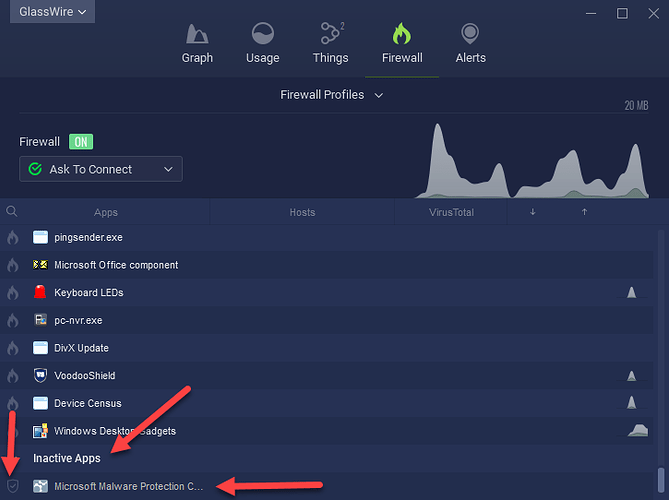 An X doesn’t appear? We don’t make it where you can’t remove certain apps from the inactive list. If an X is not appearing and you are sure then it would be a bug.

@Ken_GlassWire protected from Blocking and can’t remove from Inactive list and has a Shield in the front like the NT Kernel & System and no X.

I will discuss with our team. I am not sure if it’s intentional or not.

I’d check with my own PC, but currently I have a clean install of an unreleased version so I have no “inactive” apps currently.

@Ken_GlassWire Yes I haven’t seen it before with the older versions of GW and like I said it’s protected as it has a shield in front of it.

@csdfg2 This for sure sounds like CCleaner is cleaning things it should not be touching. Better off to remove CCleaner completely and use the built in Disk Cleanup. You can also toggle a setting in Windows 10 to automatically remove temp files, etc.

At one time CCleaner was the go-to application for cleaning your computer. Now however, it seems that CCleaner's obsolete.

Upon reading the newer entries under this topic, I have come to think CCleaner is not necessary on my machine and have completely removed it from my system.

If anyone is using CCleaner you can go to the Options tab then go to Exclude. This is where you can add Glasswire so CCleaner wont touch what programs you add in that list.
Exclude:
C:\ProgramData\GlassWire
C:\Program Files (x86)\GlassWire
Your locations maybe different than above.

I find CCleaner to be overkill. They have caused numerous problems with programs for at least fifteen years now.

I once reported a bug that was an ongoing issue and provided a fix for it. Three months later after several updates, it still was not fixed. After I inquired about that there was no fix three months later, I was banned from the forums. Didn’t think that was very good to treat an active member reporting a bug in such a way. Oh well.

Windows Disk Cleanup is safe to use, plus you can also use Storage Sense which will automatically clean temp files, etc every day, week, month, or when you’re at low disk space.