I often see alerts saying the application version changed, but the before and after versions are the same. Below are just two examples that have recently appeared in my alerts feed. What help are these?

If you go to our top left menu and choose “About”, what version of GlassWire does it say you are using?

GlassWire should not send alerts like these where the version number is the same. It would appear to be a bug. Our team is all running 2.2.241 though and we have not seen this issue ourselves, and our QA person did not experience it either during their testing.

What are the dates on these notifications? It happened today, or yesterday, or before that?

Have you seen similar notifications before?

The screenshots are notifications from today (18 August).

Yes, I’ve seen these kinds of unhelpful notifications many times before.

Do you have any similar notifications (version numbers are exactly the same) from any days before today August 18th? Knowing this will help me solve the issue. Please check and let me know.

Yes, as I mentioned, I’ve seen this many times before. Here is one from 7 August:

And here are some from 31 July:

Thank you. Yes, GlassWire should not do this. I will see if we can reproduce/fix this issue. I apologize for the problem.

Our team had a question.

Does this only happen for a few select apps, or have you noticed it with all apps?

It only happens for some apps.

A list of the apps that are publicly available would help us. We will install them. Thanks!

Feel free to click my name here and send them to me privately.

I clear the history from time to time, but I’ve got alerts going back about a month or so. I’ve quickly scanned through the list to pick out several examples where this happened:

There are also some where, after updating the application, there is simply an alert saying the executable changed, but it doesn’t show the old/new version numbers at all, e.g.:

Thanks. I have had Malwarebytes/Excel installed for long periods of time and I have not seen this but I don’t have Malwarebytes currently. I will try to find and install the Apple/iCloud apps. Thanks for this list.

We found and fixed the issue. The fix will be in our next update.

That’s good news, thanks for letting me know. Will the fix also address the problem I identified in the bottom section of my last reply, where no version information is shown at all for certain executables that get updated?

All our GlassWire clients have a “forum” link at the top left under the GlassWire menu. Anyone can post in our forum. I don’t know why nobody ever reported it but we’re very glad you did and we appreciate it. You can search the forum and see if anyone else ever reported it an maybe we missed it?

I have never experienced this issue myself. I only use Windows and I run GlassWire 24/7.

When you read my last reply, did you also read the first paragraph? If so, did you choose not to answer on purpose, or did you forget about it by the time you read the second paragraph?

Perhaps I’m mistaken, but I thought both bugs were directly related and when our team fixed one they fixed the other also.

To satisfy your curiosity, here’s my reasoning.

I didn’t report it when I noticed it for Malwarebytes last Christmas because I was busy at the time. It first started for me in November 2019 and largely stopped by April with only one occurrence since then.

I primarily didn’t report it because it just didn’t matter to me once I quickly confirmed that the version change was correctly picked up and the version info was still correct for the major change and minor change numbers #.#, e.g 4.0. I don’t need the additional info provided by a more complete version format #.#.#.#, e.g. 4.0.12.543, which usually represent builds and revisions or maintenance changes.

Also, as shown in the following example of Process Lasso, the chain of version changes is contiguous: 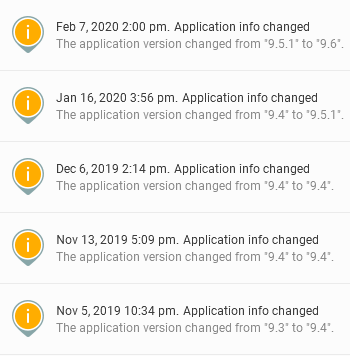 The majority of people don’t usually report problems but I did expect that someone else would eventually report this one. When you did, I gave your post a like because it saved me a little effort.

I’m glad you asked the question, and I took the time to read this thread. I have noticed what you identified before, many times, since I have been using GlassWire. I never commented on it or reported it because:
a) it didn’t make it high enough up on my annoyance list to spend the time dealing with it. Only now, when I am mostly retired, do I have the time to go into things like this, occasionally, and see what I missed. Previously I was so busy with more significant, to me, issues, like MS Outlook changes that made key features that are critical to my daily work fail. But your question was good, was appropriate, and is appreciated.
b) I figured there was some other detail, that didn’t show, which was causing these no change items to show up on the list.
c) My main concern was not missing changes, and for the programs I was actively following, I haven’t seen such changes get missed.

So, good question and thanks for following up on it as well.