Can't trust Windows Firewall, Can I use with Comodo?

I’m testing out GlassWire. I really like the app but I hate that it uses Windows Firewall. You see in 2007 Microsoft was implicated in the NSA spy program called Prism. They stole data from millions of people. Windows Firewall is closed source so Windows firewall nor GlassWire will show you a hidden NSA back door or allow you to block it. I can’t trust this set up. Can I use GlassWire with Comodo? If not, can someone suggest a tool with GlassWire’s features that will work with non windows firewalls? Thanks.

I figured out why no one is answering this post… cus it cant work with other firewalls cept Windows firewall. O.k. lets try this Another way. First lets address the Issue, that I have a good point no one it seems is willing to discuss and that is the Windows firewall cannot be trusted because it’s closed source. This would be a weak point security wise for GlassWire. You can disagree with this if you trust Microsoft but still, the point here is to prove to me that either the fears are unfounded, (not gonna happen) or that there is another way around the problem. So lets try the latter.

We chose to use Windows Firewall instead of creating something ourselves because it is under heavy security testing by third parties and it’s used by over a billion Windows users world-wide. Also it’s lighter and uses less resources than creating something custom. We personally would not trust a third party to disable our Windows Firewall and replace it with some unknown thing.

If you don’t trust Microsoft Windows then GlassWire may not be the software for you. We have no relationship with Microsoft, but we use their Firewall API and we trust it ourselves.

I am not an expert on Prism https://en.wikipedia.org/wiki/PRISM_(surveillance_program) but from what I understand it had more to do with sharing information through Skype (owned by Microsoft) and sharing data that Microsoft collected and it wasn’t about a backdoor in Windows Firewall. Feel free to correct me if I’m wrong.

We at GlassWire agree sharing user private data is not OK and we would choose to shut down GlassWire before putting a backdoor in our software.

Also GlassWire only puts your data on your PC and your data never transverses our servers at all, so we can’t see your data even if we wanted to. Our privacy policy is here https://www.glasswire.com/privacy/.

And you should be asking Microsoft, not GlassWire, about what you can do with Windows Firewall.

I understand that Ken. Thank you for replying. It’s not just Prism, Microsoft has had its hand in lots of cookie jars… just look at the world wide litigation they have been involved in over the years, as well as past connections with the NSA since Windows 95 came out. I remember all that stuff from years back. I understand most people trust Microsoft, they wouldn’t have a good PR team if they didn’t. I can’t blame you for using them either. I prefer to use Windows over Linux or Mac because i’m an old pc gamer and nothing beats pc games. I just wish you had a standalone firewall. I do love the features of GlassWall and the fact that it seems to catch more outgoing connections by Microsoft better than most, (you wont believe what some of them miss - then again, I’m sure you would… you must see it all the time working with these tools) and give good info on them too. I have tried different firewalls with and without different internet traffic monitoring tools and cannot seem to find as elegant interface let alone one that works, like GlassWall does. I don’t have a bad thing to say about GlassWall itself.

Remah, thank you for the reply.

None of that matters if indeed there is something hidden in the code doing things Microsoft doesn’t want the user to know about, and if there was, believe me, none of us would know about it. . I have to satisfy my own security needs for my best piece of mind. I’m just trying to find ways around my problems so I can do just that.

Ofc., they (Micro$oft) are able to do practically whatever and nobody would be none the wiser. There are even such things as hardware encryption, these days (in cooperation with Intel, we can see that system tested with the so-called Secure Boot).

Not to stray too far off topic - but, for example: our government is proudly presenting their purchase(s) of the Windblow$ OS (for various institutions), while others are being rational @reuters.com/article/us-microsoft-china-idUSBREA4J07Q20140520

Anyway, I’d arrived at the Windows Firewall revelation like so:

& IMO, this is very cool!.. A beautiful front-end to that engine is awesome, right?! It’s going to be something that the *nix communities have been trying to do for years… Like, a iptables control program; like a ufw (of sorts) which is usable, nice!!

IDK., GlassWire’s been running for less than a day and I’m -simply- loving it! Thank you everyone! <3

Edit: Oh, right: Which would be the Win-firewall which is open-source. Because there aren’t (m)any. Not that many products on the market, either! Existing ones are (constantly) being killed-off; latest tragedy: agnitum.com/migrate.php

Tiny Personall Firewall, to Kerio Personal Firewall which then became some corporate application which moved away from the PC and the home user. Now, Kaspersky is extinguishing -basically- the best personal FW on the market. :-/

Sorry, new users can only put one image in a post.

^^ Here’s that screenshot, hope nobody minds!.. 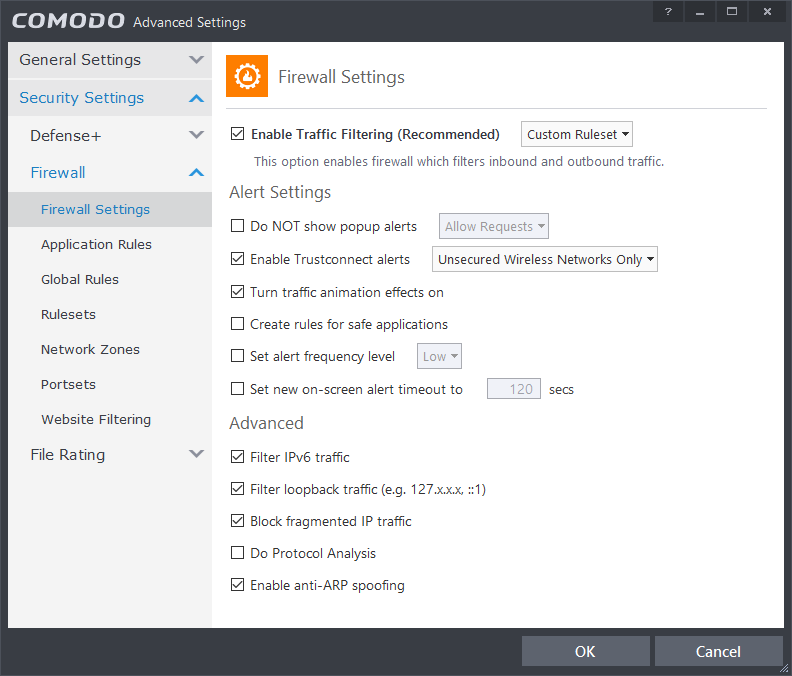 Here’s that screenshot, hope nobody minds

I am sure that nobody minds. You’ve taken the time to make it easier to follow the link. I’ve added the hyperlink to the first mention.

The only surfire firewall is to block all connections, as in no internet.
In reality click to allow is the best option and I believe glasswire paid has that option. I’ve not upgraded yet, waiting for sort columns to be added.
If so that saves you from any ‘back door’ that may or may not exist.

Hi
I use both Glasswire Firewall and Comodo Internet Security Pro without any problems at least for the time being. I bought GlassWire one week ago. Comodo never disappointed me.But I must say that Glasswire detects connections faster than Comodo.
Best Regards