DNS Change alerts do not show up anymore

Hello!
I have noticed that since the latest Windows Update (the one I believe for the PrintNightmare problems), DNS Change alerts do not show up anymore.
Before that I would get a desktop notification whenever I switched my VPN on and off for instance but since the update nothing is showing up, either on desktop notifs or in the Alerts section.
I use 2 VPN providers so the problem can’t be associated with only 1 of them and I’m just wondering whether the latest MS update might have changed some networking components…

Thanks for your report. We will investigate and try to reproduce this issue.

Alright, then!
Please keep me informed of your findings even if you actually end up not being able to replicate the issue.
I do believe the MS patch did apply some changes on the network level, perhaps some virtual network adapter or something and DNS changes don’t seem to be picked up by Glasswire anymore, at least on my computer.
I haven’t tried to do a re-install so far…

I connected to my phone’s hotspot just now, and that always causes a DNS alert for me. I immediately received a DNS alert, then I switched back to our work WiFi and I received another DNS alert. 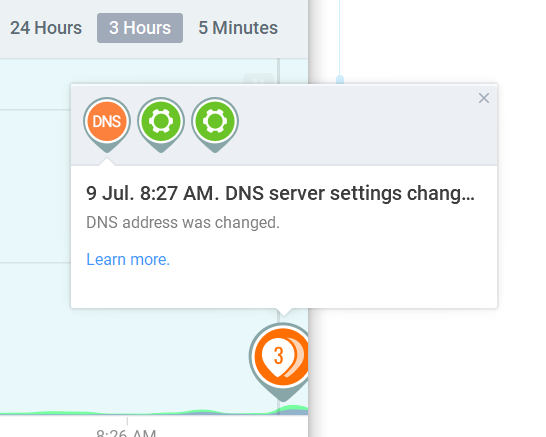 Perhaps your DNS alerts were disabled somehow? Go to our top left menu and choose “settings” then “security” then “DNS”.

Also I am 100% sure I have the latest Windows updates.

Hello Ken,
Well, prior to post in the forum, I did make sure my DNS alerts had not been disabled.
Since then, one of my VPN clients has been updated and thus re-installed, which I think should have fixed, if it had been the source of the problem, any network driver that could have been the cause of this new behavior. As I stated before I have yet to try to re-install Glasswire and see if that corrects something.
Actually, as I’m typing this message and even though it didn’t show up on Desktop, which is not normal, I do see an alert for a DNS change as I switched to ExpressVPN…
Gonna try to understand what’s going on then. I will wait for a Glasswire update to see if the re-installation changes anything…
But I do confirm that these “glitches” happened after my last Windows update.

Thanks for these details. Our Quality Assurance person will investigate and see if we can recreate this issue.

Hello IndoSteph - thank you so much for this post.

I thought maybe I was hallucinating - but I observed the same thing. Before the latest update, (prior to version 2.3.323), Glasswire was reporting many DNS changes - and I thought my IP address changes, although that may have been my imagination. Typically, I would notice the DNS changes whenever I would turn on or off NordVPN. Now I am not seeing them at all, or only very sparingly. The change was very noticeable, since there were a lot of NordVPN turn ons - turn offs, as I attempted to resolve other issues with NordVPN. Issues like failure to connect to various services, through some of the Nord servers, but not others.

Sadly, the evidence of prior Glasswire performance seems to have disappeared; the detailed DNS information in the Glasswire history is missing. Previously, I could go back and see the DNS changes, consistent with the changes, (turn on and turn off of VPN, with and without “killswitch” enabled). However most of this recent history has gone away. I did see a notation as the new Glasswire version was installing, that the database was being rebuilt - I assumed that the rebuilt database had been changed to eliminate the data I was interested in, but, as I say, since I don’t have an old version to compare it to, I have no way to explicitly define what is gone. There are a few DNS changes, but the alert history listing is missing most of the more current changes that I recall.

So, Ken and Glasswire folks - I can’t really accurately describe what has changed, but whatever, it is significant and adverse to what I am trying to diagnose with NordVPN, and I’m very sorry I installed this upgrade. Please make it work like it did before.

Sorry for the issue. We will continue to try to recreate the problem. As you can see above I specifically tested this issue myself and it worked OK for me.

@IndoSteph do you use Nord? If both people are using Nord is it possible that they changed their software some way?

I can only say that we haven’t made any changes to our DNS detection in any way. I also run our helpdesk and I haven’t seen this issue reported.

I will escalate this report to our development team. We have a machine with Nord and we’ll test with it.

Ken,
I do use NordVPN as well as ExpressVPN and while I did notice a DNS change alert (not displayed on desktop as I mentioned earlier) once with ExpressVPN it actually was a one off and subsequent use of Express didn’t trigger anything. Nord doesn’t trigger anything either as far as Glasswire is concerned.
I do know that the Nord client was recently updated to version 6.38.8.0 but I forgot when it was.
As I said before I rather associated the change in behaviour with the Windows update but it could indeed come from a change from either Nord or Express as they also recently did some changes to their client on the lightway protocol I think.
Anyway, since it appears that BobC has the same issues and is also using Nord, this might be something to investigate and it would be interesting to see if other users encountered the same issues.
I consider DNS changes monitoring as an important feature and I frankly find it very annoying that Glasswire can’t be trusted anymore for that task…

Our team asked that you turn on logging, recreate the issue, then email us the logs.

How do I make technical support logs with GlassWire?
-Stop the GlassWire service via the TaskManager.
-Open C:\ProgramData\GlassWire\service-full (or -lite, depends on the version you run).
-Open glasswire.conf as administrator.
-Set the following parameters and save the file:

Start the GlassWire service via the TaskManager.
Repeat the problem and wait a few minutes.

Send us the logs from C:\ProgramData/glasswire/service-full/log (or service-lite, depends on the version)
Contact GlassWire - Please include a link to this thread.

OK done Ken but to which service do I send the log file?
Bugs or Help?
Oh well… I might just send to both and see

I got your email, thank you!

Alright then! Let me know if you find anything!
Maybe the “Failed to deserialize a NetworkDeviceInfo from DB.”?

We were able to find a problem. The next update should solve it. Thanks for your detailed report and logs.

Great then!
I surely am waiting eagerly for the next update then!

Thanks a bunch for taking the matter seriously and investigating it so thoroughly!

Please try our update we just released, it should solve this issue. Thanks for noticing the problem and making this detailed report so we could fix it.

I downloaded and installed v 2.3.335 tonight and it appears to have addressed the issue. Thanks to @IndoSteph for prompting me to report as well, and for providing more detailed info. Sorry, I have been traveling and otherwise involved since then, so had no time to respond to your request for detailed info, but really appreciate your efforts to correct the issue.

I received an alert about a DNS change but it seems that in fact there was no change.

Thanks for your feedback. We will investigate and try to recreate this issue.

Ok, just installed the update and so far so good, at least with one of my VPNs.
I will cycle through different configs to check more thoroughly as soon as I have some time!
Thanks a bunch for taking the issue seriously and updating your product quite promptly!