I installed the beta and compared before an after screenshots to catch any obvious differences - I only found one.

The only change I made to the install settings was to uncheck a desktop shortcut.

Before: all settings are turned on 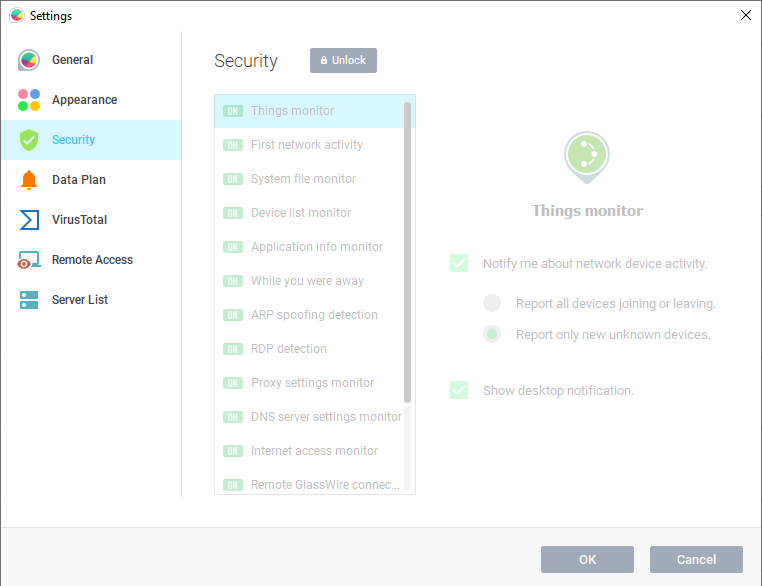 After: many settings are turned off 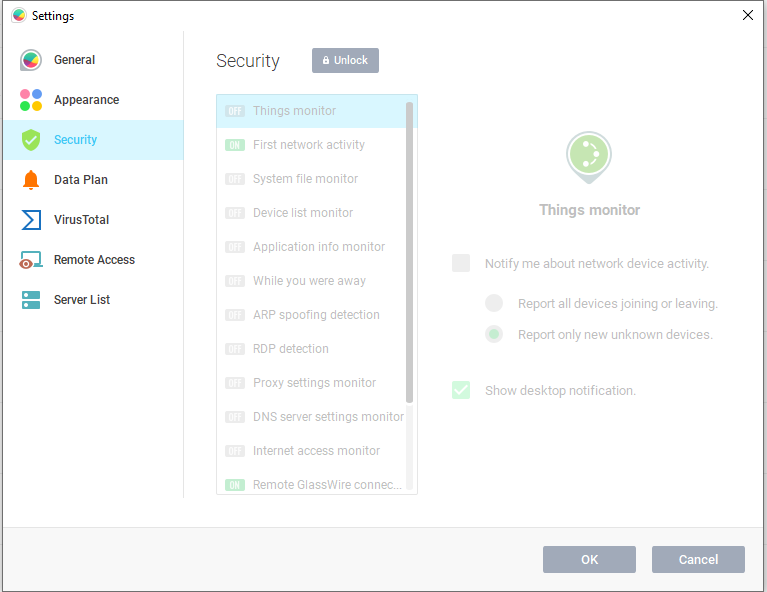 Thanks for your detailed report and screenshots.

I am not sure why so many security options would turn off for you for an upgrade and I’ll report this.

For VirusTotal, I have never heard of that engine and since our .exe is distributed to only a small group it’s more likely to have false positives with these tests unfortunately.

Were you downgraded to a free user? It’s a known bug with this beta version.

For anyone else reading this, you can join the beta email list here if you want to test: http://eepurl.com/bVfWqD

Were you downgraded to a free user? It’s a known bug with this beta version.

Yes, it was deactivated.

I had a few issues as well:

Others are experiencing the same issues. Thanks for testing and please be on the lookout for the next update. Thanks to logs from users we were able to find and fix the problems.

If you did see a .dmp file (you said GlassWire would not work at all) on your desktop please send it to us.

Fortunately I have a Windows 10 Pro 1090 test system on which I was running Elite over which I installed the beta and ended up with an expired trial version. Activation went OK.

The 2.2 beta so completely borked LAN connectivity, nothing else on the LAN could talk to it, e.g. the ethernet printer, and TeamViewer from another Win10 PC. All sharing and syncing broke. I had to disable Windows Firewall itself for LAN connectivity to work.

The router was seen and the intuhwebs were accessible.

Using GW’s uninstall and trying re-installs of both the beta and current versions resulted in multiple errors due to the service being marked for deletion but failing to being deleted without a system restart - an issue I’ve run into in the past.

There is no dump file on the desktop or elsewhere.

I had to use Revo Pro to purge Glasswire from the system. But LAN connectivity was still broken…

After the clean/reset re-install and activation of 2.1.167 everything was OK; thankfully I didn’t have to delve into fixing Windows Firewall.

But I found I could not get my data back having followed your “Backup all GlassWire Settings & Database” procedure (actually copying the bak files and renaming them, keeping the originals safe). All the files were ignored, or maybe overwritten by the current, new data. My profiles are gone. So are all my blocking rules.

I think I and others have expressed over the years how absurd that backup/restore procedure is particularly in how important Glasswire is. As well as an above average level of expertise is needed to follow those instructions (where file extensions are disabled by default in Explorer), let alone being able to stop and start the service as needed.

Otherwise, the Glasswire team has its work cut out for it. As I need this test system to ferret out “Bork Tuesday” updates from Microsoft, I’m reluctant to try out the next GW beta. Recovering from this one was too much work. System restarts, and there were a bunch, on an ancient 4GB RAM, HDD, E8400/G35 desktop suck the life out of ones time-space continuum.

More issues which have also occurred in older GlassWire builds:

Thank you for all this detailed feedback and information so we can work on improving.

Mine stopped scanning after a short time.

Good to know! Are you sure the scanning was turned on in your general settings?

Actually, that was ambiguous. I meant that the scanning message stopped and I can scan at will.

Our QA was able to reproduce this also, thanks!

VirusTotal isn’t an engine per say it uses all available engines. We hunt and track malware, spyware and viruses all over. You can get and API to track files or anything else malicious through the different domains. That being said it generates a lot of false positives and people need to read everything before jumping to conclusions.

Only 1/71 engines found a “possible” virus and that engine really isn’t intended for that particular type of query. .I will go on Virus Total and mark it as safe and comment on what the file is. It’s a public community so my vote is only worth so much, but it will help. I suggest everyone create basic accounts for free and do the same. It’s a really handy tool and you get a free basic API for tracking and mapping.

Thanks for marking those files as safe! I agree it’s very helpful for the VirusTotal community.

That file was linked to his system and not the original download. I marked it and commented but if you want me to do the same for the actual download from your servers I need a link to it. I can then run the URL through it and submit a public map of the download that will include everything. It’s probably has already been done, especially if @Remah submitted it before download. I just can’t map it from that link.

That’s OK… it doesn’t matter much for the beta. We hope to have your test for the final version though.

If you just want to try it I would recommend waiting until the next beta of GlassWire since it should be out pretty soon.

I wouldn’t have installed it on this system anyway, I could have put it on a test system and network but that wasn’t why I was asking. I was just going to submit it, comment, and give it my thumbs up after analysis completed. You’re right though it it’s not an open beta and not very distributed then there’s really no reason.