Hi I just updated from the latest stable to Glasswire 2.2.201 on windowd 10 pro 1909 and now “incognito mode” is not working. It shows all my network traffic under usage.
I did a install with the “clean install and delete all settings” option and tried enabling and disabling incognito mode a few times. Still all data is shown under usage.
Any tips?

We tested Incognito with our QA team, then also had our beta testers test. Are you 100% sure? I will report this to our team so we can try to recreate the issue.

Is this full Incognito or just Incognito for one specific app? We have both modes.

If you restart GlassWire do the stats disappear from “usage”? Our team wants to know the answer to that. It will help us diagnose this issue. 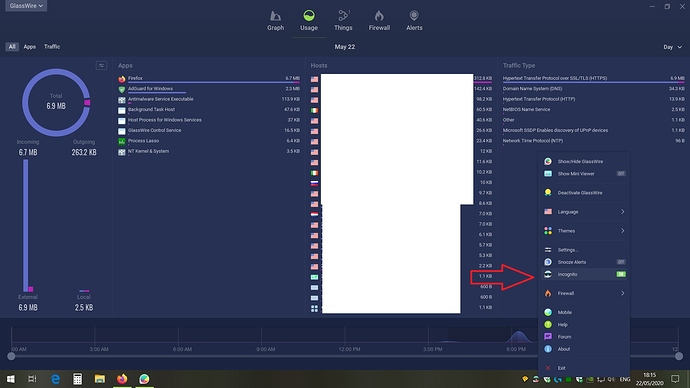 With the old stable I did it the same way and got no problems.

What exactly do you mean with “restart” glasswire? Rightclick the icon in the taskbar and “exit”?
If yes I still got the same problem.

Thank you for these details! Yes, I just meant Exit GlassWire (top left menu) then start it again.

Are you 100% sure the data is not from a previous time period during the day BEFORE Incognito was not on somehow?

We will try to recreate this. Thanks for your report so we can get it fixed.

@Ken_GlassWire Yes im 100% sure since I used the “clear history all option” (more than once). I started with a clean slate surfed the net and usage data is shown.

When I enable and disable “incognito all” a few times (while purging the history) it seems sometimes to work till I reboot the pc. Then all is back to usage shown again (while still in incognito)

OK. We just tested on two different machines and we could not recreate this.

If someone else can recreate it please post the details here!

I will ask our team what we should try next. Sorry for the issue.

@Ken_GlassWire Sorry I missed the question above.
Yes when I exit glasswire the stats disappear and the usage panel is blank. Atm it seems to be working for me. The amount of data programes used is shown under “apps” but no other info in the “hosts” section.

Is the problem fixed completely now that you restarted GlassWire? Or does the issue continue?

i have same problem i updated to 201 and firefox data is in the stats despite of it being added to incognito list, it was working fine before (version .167 was ok) this update.

edit the problem persist after rebooting, i have even tried to remove it from the incognito list and re-add it but it don’t help, i have also tried to clean the whole history.

Hello everyone in this thread. @Geri123

The data is not actually permanently stored in the GlassWire database, it’s just temporarily there until you switch Incognito off.

We plan to put out a fix for this next week.

edit turning on and off incognito mode do nothing for me, firefox stats are still here

Just to be clear…

Or are you saying something else entirely? I am not sure I understand.

Please explain in detail so we can be sure there is no misunderstanding about what is happening.

It’s the Glasswire per-app Incognito which is broken for me in the latest version, thanks Ken

If you turn off Incognito, then turn it back on, I think you will see the data disappears

Just did that. The data didn’t disappered it just was no new data added (see screenshot). The screenshot was taken after going from incognito to normal then back to incognito 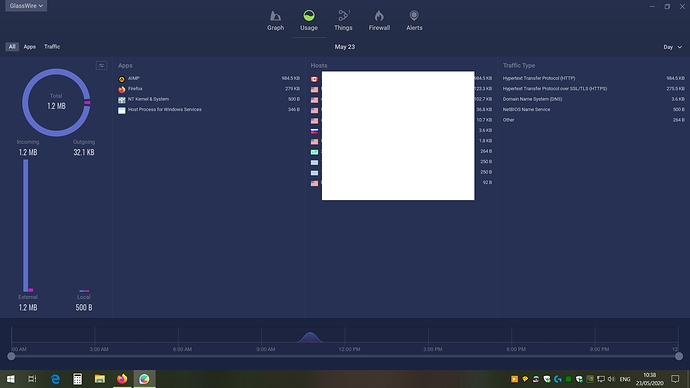 After that I cleared the history and left and entered incognito mode again. This time I got all 3 fields in “usage” empty as I would have expected it to be.

When I talk about incognito I mean the “incognito all” function.

Thanks for your time and help

Thanks. Our team is investigating.