This is a real pain - I’ll have to revert to previous version for a while, I think.

My initial installation resulted in a blank program window with a message saying something like “attempting to connect to local server”, which it repeated a few times over a few minutes, then it crashed, telling me that the GW service had stopped working. I clicked on the link for help about that, which took me to instructions for addressing that issue.

I followed the instructions, rebooting (which didn’t get rid of the issue), then uninstalling GW and then doing a clean install of 2.2 and rebooting. After that GW appeared to be working fine - BUT after about an hour the GW service has stopped working. Restarting GW brought me back to the ‘attempting to connect to local server’ nonsense, with the GW service then crashing again.

So, until this is fixed I’ll have to revert now to the earlier version.

Sorry. Do you see any .dmp files on your desktop you could send us?
https://www.glasswire.com/contact/

I had quite a ding-dong in reverting to 2.1.167, and uninstalled, rebooted and reinstalled and rebooted twice before any data showed on the graph - and with the first reinstall of 2.1.167, after rebooting there was some system network corruption causing no Internet access at all - but I ran Windows Network Troubleshooter, and it reported that it had found an error - ‘no default gateway found’ and had fixed that - and indeed Internet access was then resumed, but GW still wasn’t showing anything in its graph, apart from a moving timeline. That was why I did the second uninstall, reboot and clean reinstall and then reboot, to be as sure as possible I’d got a fully clean and correct installation.

Anyway, that does seem to be working now, but I’m leaving 2.2 alone for the moment until it’s had some further builds. I think this must be first time I’ve had trouble with a new GW version - had got used to assuming that such problems were what happened to other people!

With 2.1, did you have a large data usage history before upgrading to 2.2?

Did you try a clean install with 2.2, or did you not want to because you did not want to lose any history? Also for anyone else reading here is how to backup your settings/database in case you want to before upgrading.
https://www.glasswire.com/userguide/#Backup_Settings

With 2.2 I started with installing over the old version, and then after uninstalling I did indeed do a clean install, after a reboot, and then did a reboot after the installation as recommended.

regarding 2.1, I really don’t know - presumably all that’s obliterated by my having done a clean 2.2 install - though I could trawl through my system backup made earlier today if you tell me where to look for the file(s), and I could report on the file size(s).

If you did a clean install the files should be lost unfortunately. Sorry for the issues.

Meanwhile if you’d like to try a 2.2 install again in the future I could provide you with a version with logging so we could find the cause of the issue you are experiencing, then we can fix it for everyone. @PhilipGoddard

Just email us a link to this thread. https://www.glasswire.com/contact/

So if we have the 2.2 beta, we install this official release over it?

Yes, it should upgrade with no issues.

I’ve got the same problem as Philip Goddard. “My initial installation resulted in a blank program window with a message saying something like “attempting to connect to local server”, which it repeated a few times over a few minutes, then it crashed” Lots of dmp files. I guess I’ll watch and see if there is a fix posted here.

I’ve just emailed for a logging version of 2.2, so we should get some answers and a resolution before long.

Well, after all that faffing around, 2.2 is now working fine on my system!

Yes, after lunch today I got a strong intuitional nudge to have another go at installing 2.2.

I automatically thought to uninstall 2.1 first, but an inner nudge pointed me first to try installing it on top of 2.1 but as a clean install. But then when I was about to click the ‘Clean install’ checkbox I had another little surprise intuition, to experimentally see what happens now if I do a ‘dirty’ install first before trying to clean things up, and with no reboot unless anything had gone wrong.

And you know what? – The world came to an end most calamitously of course (we’re all just ghosts now)!

In other words, 2.2 installed smoothly and ran smoothly, and, after my evening meal recess and starting up the computer again, GW 2.2 still running smoothly!!

However, there was one little difference about the installation this time. Before starting the installation I temporarily turned-off my power AV, VoodoShield. That may have been significant because part way through each of the previous installations, each time VS had intercepted a command line that it regarded as suspicious and gave me a prompt-alert. Although I allowed that each time, it occurred to me that there was a possibility that by delaying that particular action VS might have been causing a glitch each time in the overall installation process and so slightly corrupting the program or its configuration.

So, yes, I do need to remember to temporarily turn-off VS for installations of programs I trust!

Wow! Does VoodooShield have any logs of what the command was they didn’t like? Maybe I can email them and get them to white list us.

If anyone else has this issue please let us know if you use that VooDoo software or not.

Thanks for the details @PhilipGoddard.

I use VoodooShield Pro as well and It never gave me any issues installing GW? https://voodooshield.com/

Are there any settings that @PhilipGoddard could have activated that look at scripts in installers or anything similar that you might not have turned on?

You can put VoodooShield in Disable/Install mode but I don’t. 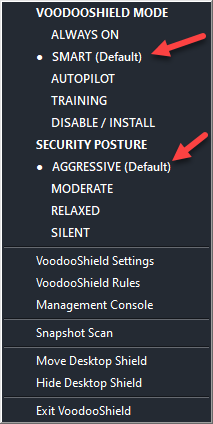 I’ve extracted the VS log entries covering the period during which I did the installations. Weirdly, I could find only one entry saying ‘User Allowed’, for that would be one where I responded to the prompt. There should have been one for each installation. I’ve saved the list as a txt file, which I’d be happy to send you so you get a better idea of what VS was up to, but here’s the one User Allowed entry:

– And yes, that is from when I reverted back to the earlier GW version, but it does highlight a significant point.

I should explain that it’s highly problematical behaviour of various installation programs to run programs or scripts from uniquely-named folders or files, because they can’t be whitelisted, and are thus a problem for security software to recognise as safe.

I’d run into that issue with other program installers and indeed had a really nice exchange with Dan, the VS developer, who explained the problem, and how with VS this could be worked around by creating a rule to make an exception for the particular Temp folder. I set that up and found that I could still choose to have a choice of conditions applied to that exception to make it as safe as possible - the one condition that I had to leave disabled being ‘if it is digitally signed’. I think if I disabled one or more of the other conditions there would be no issue from GW installer - but I’d rather keep most of the conditions if possible for safety, and rather just remember to temporarily turn off VS (a simple left-click on tray icon) immediately before running the installer of any program I trust.

But more generally, I’d seriously recommend to ANY software developer to understand the problem they create for users of some AV / AM programs by creating temporary scripts / exes in uniquely named folders or/and with unique filenames. They need to make it as simple as possible for all their installation programs and scripts to be easily whitelistable.

That’s my million-dollars’ worth for the moment!

Thank you. I will share these details with our team.

In my mode within VS I did an over the top install and this was the only thing I had to allow from VS. The rest was Auto Allowed.