GlassWire Control Service keeps saturating one core of my system. Running Win10 1903. I’ve already tried reinstalling, with and without the ‘clean’ option. 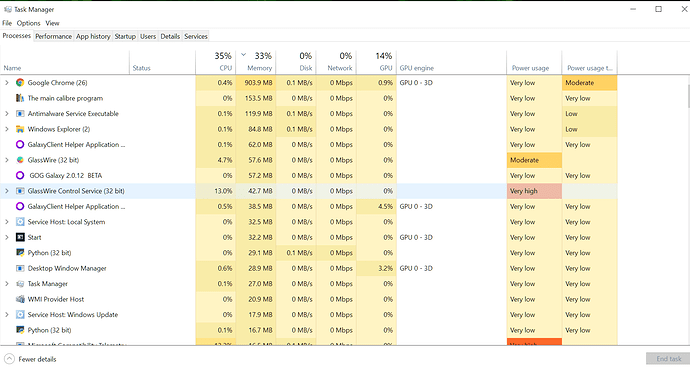 Is it a one time instance you noticed this or consistent? The reason I ask, at the moment, GW isn’t using much CPU on my rig. However, in the recent past, I did witness CPU usage much higher than displayed in your screen shot. Not sure of the cause, more information concerning this fluctuation would be helpful

Are you running Bittorrent?

@TSeff It’s constant, regardless of any activity.

@Ken_GlassWire I have a client installed if that’s what you mean, though it wasn’t actively running.

I opened it and closed it again to see if it would make any difference, but nope, GW keeps saturating that core regardless of whether the client is running or not.

(Before you ask, yes, I shut the client down properly. It’s not continuing to run in the background.)

Just for kicks I started shutting down other processes and services to see if any of them would make a difference, and one apparently does. A tiny little app called Remote Mouse that sits there and lets me use my phone as a touchpad. (I’d post a link but apparently I’m not allowed to.)

When that app is running does GlassWire’s graph show it under apps? What does its network activity look like?

In most cases the only reason GlassWire will use a lot of resources is if it’s asked to do a difficult task. One difficult task is keeping up with your PC connecting to thousands of hosts simultaneously with Bittorrent.

GlassWire’s job is to graph hosts and keep the data for you so it has to work very hard with Bittorrent. Is that Remote app doing something similar to Bittorrent? Very weird.

Perhaps if you set the app as “incognito” it will solve it.
https://www.glasswire.com/userguide/#GlassWire_Menu

It has no network activity whatsoever when not in use, and some 400 bytes per second when in active use (as in when moving the cursor), it connects only to the phone over local wifi.

For some reason GlassWire shows the app as +999 connections, but I don’t see any such activity in the Windows Resource Monitor. Very weird.

Thanks for your help. And merry Christmas

Wow, it would be interesting to know what these connections are! If you click the graph data it should show all these hosts, or go to Usage to see the details.