I know there have been countless posts about this before but they’re all dated 2016 or older. Being as there are multiple posts in different time frames I assumed it is best / more appropriate to create a new post regarding the error rather than commenting with more information on an older post. If I was wrong on this account please feel free to inform me otherwise.

Regarding the issue I’ve run into I was unable to find a quick resolution. I have attempted the following fixes;

My current Glasswire version is 2.17.137. There didn’t seem to be other similar posts so I don’t believe it is an error with just this version.

Unfortunately I don’t recall exactly when the issue started but has been ongoing for a least a few days.

I attempted to include more screen-shots but it seems my account is too new to be of any help by including more information.

Any resolution to this would be greatly appreciated but the application is not required to use my PC so I will suffice with a slow resolution.

Thank you for your time!
Austin 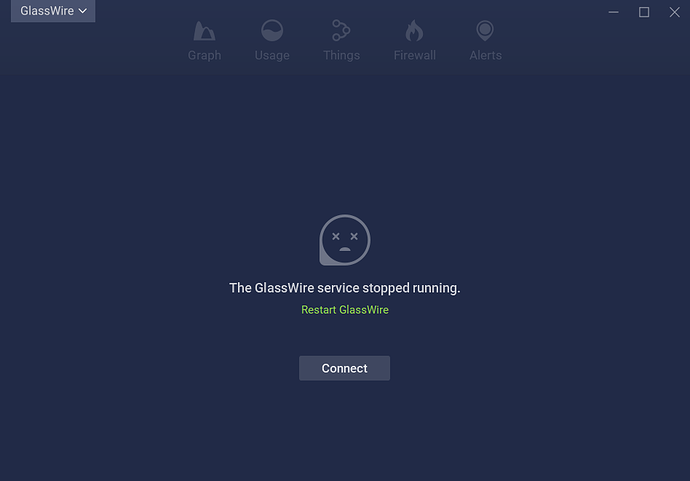 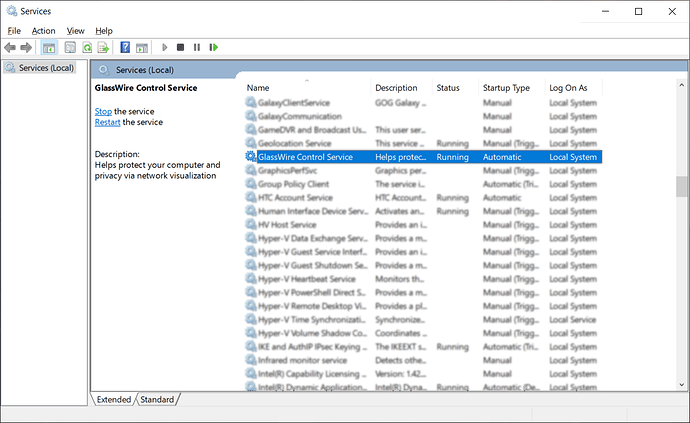 You are right to make a new topic because this looks like you have a unique problem. It probably started when something was updated or your GlassWire configuration was corrupted - have you had an power problems? Another possibility is that another program started to stop/block GlassWire.

The GlassWire team are likely to recommend that you try to reinstall GlassWire.

Do you notice any .dmp files on your desktop when GlassWire stops running?

Thank you both @Ken_GlassWire and @Remah for replying to my post.

It probably started when something was updated or your GlassWire configuration was corrupted - have you had an power problems?

I did have a breaker switch at some point recently but my PC is on a battery backup and was able to get through without power loss.

Do you notice any .dmp files on your desktop when GlassWire stops running?

No I didn’t notice any .dmp files but then the application didn’t crash it just didn’t work properly.

The GlassWire team are likely to recommend that you try to reinstall GlassWire.

I did reinstall the application and this resolved the issue.

Thank you again for your aid everyone. I hope that this post proves useful to others in the future.

Thanks for letting us know.

I did have a breaker switch at some point recently but my PC is on a battery backup and was able to get through without power loss.

Short term transients also occur when a computer keeps running on a UPS. Most UPS have a switching transient before they come fully online. That is often enough to cause a problem such as corrupting the memory in use by a running process which can then lead to corrupted data being saved to disk.

A voltage sag or spike that leaves the computer running can easily change in-memory data or software without it being detected because most of don’t use ECC (error-correcting code) memory/RAM. The consequences of a short term transient are difficult to predict and difficult to detect which is why the first step after a power problem should be to shutdown your system and restart it when the power issues are resolved. It is also good idea to also disconnect your computer from the electrical system in a thunderstorm. Lightning hitting the local electrical system (commonly at lines and transformer) can damage attached appliances including computers.

When you shutdown and restart your system all processes are reset and startup error checks (POST = power on, self test) have the opportunity to detect some common errors. You’ve then moved your computer from an indeterminate/unknown state to more determinate/known state.

That’s why I prefer a complete power cut which requires me to restart my computer. It used to be the case that a complete cut was worse than a power transient. But that is may no longer the case now that SSDs (solid-state drives) and new HDD (hard disk drive) technology have largely eliminated the previously common problem of physical damage to a hard disk due to power supply irregularities.

If you are experiencing this problem first try rebooting your PC. If GlassWire still cannot run please uninstall GlassWire in add/remove programs, then reboot your PC (this is an important step in the process), then reinstall GlassWire while checking its “clean install” option in its installer.

This may help you,
Rachel Gomez