Yesterday I installed clean Windows 7 with All Updates.

Today after I put computer to sleep it woke 1 minute later, however screen was still black. I had to press any key on keyboard to make computer display anything.

Sent to the development team. Thank you for reporting this.

I know Ken is going to deal with it but until he does years ago I had the same fault in Win 7 and it was down to updates . I cant remember which one cured it but =1- Press Windows key+W-type troubleshooting then click -system and security= select -power follow prompts /OR - Delete current power plan and re-create . Thats right good ,ol MS at it again in deciding what goes on in Your computer.

Having the same issue on Windows 10. Love your product. Also tried the fix listed but no luck. Thanks for the input.

Thanks. We’ll investigate and try to recreate this.

Facing the same issue. When I put my PC down to sleep with:
C:\Windows\System32\rundll32.exe powrprof.dll,SetSuspendState Sleep
Glasswire systematically wakes up the PC after 15-20 seconds.

That started happening when I updated Glasswire to the latest version a few weeks back, before I had quite an obsolete one (can’t remember which version though).

I love Glasswire but man this is really annoying, hopefully it’ll get fixed soon.

EDIT: this still happens after I disabled Idle monitor, exited Glasswire and killed the Idle monitor task. So essentially only the Glasswire service remains running and provokes the wake up.

We released an update today, can you try that one and let us know if you see any improvements? Thanks!

The latest version triggers my antivirus (Avira) with detection of ‘HEUR/APC (Cloud)’ threat.

I installed it anyway but the problem is still there.

Please submit the false positive here https://analysis.avira.com/en/submit and I’ll do the same.

Yeah, I did the same as you then also submitted the URL separately.

I’ve fix it by changing Power Options and wake timers: 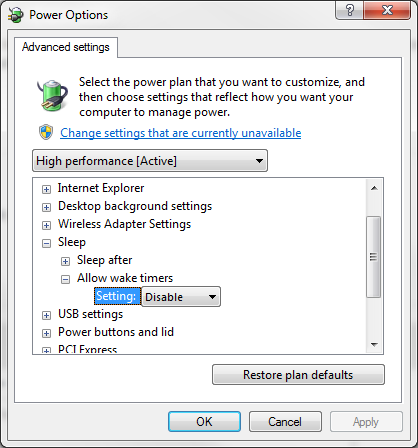 If you look at my above post you will see I mentioned that.

We figured out what is causing this and we’re working on a fix.

Crappy software. Turned my PC all night on and i had no clue who caused this.
UNINSTALLED!!!

Any app under continuous development due to Windows system interaction is bound to show up some problems just look at Windows continuing -unceasing updates from the year dot a billion $$$ company. Go to many app websites and you have developers answering customer complaints GW team aren’t the gods of Apps given approval from that great APP in the sky they are human beings give,em a chance with a Million downloads just look at the fault ration it looks good to me.

If you are having this problem please email our helpdesk with “waking computer” as the subject so we can send you a new version to test.
https://www.glasswire.com/contact/

So i have the same problem with Glasswire v1.1.27b, it wakes my
computer from sleep mode moments after it shuts down. I am not 100%
sure, but i think the same problem was with previous version too.
Every time Glasswire is uninstalled, computer stays in sleep mode and doesnt wake up by himself.
OS - Windows 8.1 64bit.

https://www.glasswire.com/contact/ Could you email our helpdesk to test a new version? Thanks.
Please make the subject “waking computer”.