When in Usage tab under Hosts under the list it constantly changes between +39409 and +39410 every 1-2 seconds. Also in when in that tab cpu usage jumps and whole program becomes less responsive. In any other tab its ok. 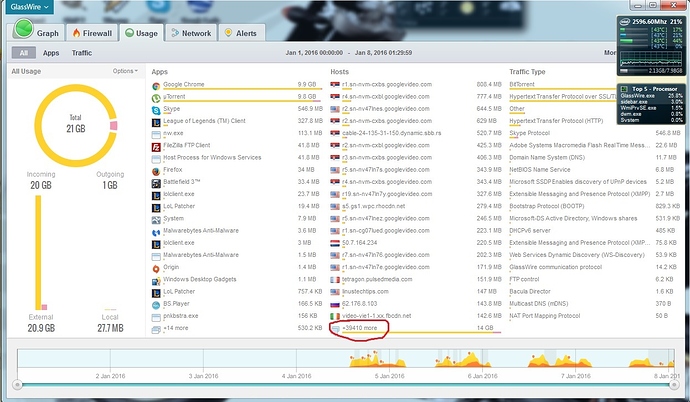 I haven’t seen this before so I’m not sure what to recommend. We had another user who complained of high CPU usage and a reinstall solved it, but I hate always recommending that to everyone because you will lose all your data.

To reinstall, first uninstall GlassWire, then go to the “ProgramData” folder and delete the “GlassWire” folder, then reboot and reinstall our latest version.

I will reinstall and give you a report after few days

After reinstall and running for about 12 hours and ~25000 bittorrent connections it usage tab started using a lot of cpu again and I noticed main process uses ~80MB and control service ~70. Thats a lot, I think cpu and ram problem is caused by high number of bittorrent connections. I find program very useful but I will stop using it for now and come back later to see if anything changed.

Yes, it’s a known problem with some Bittorrent clients that GlassWire will use too much RAM. If you want to email our helpdesk with the subject “test group” I can add you to our test group for a new version that’s coming out shortly that fixes this.

The high memory usage doesn’t bother me since I have 16GB total RAM but I do have to say that it uses quite a lot more RAM than all the other applications that I have running (games not included).

On my system when running Deluge bittorrent client, not downloading anything, just couple of torrents on seeding mode, barely transferring anything at all, basically idling.
As a result Glasswire uses 894MB of memory with 5.5% CPU usage.

Its not a problem if it uses 100mb constantly, problem is that it keeps getting bigger and bigger

funny how the last version I didn’t see a hi ram use. now it uses 2gigs after the last update. that is just to much for how small this program is.

@clamo You’re going to like our next update. Please email our helpdesk to join the test list if you want to get an early version that has much lower resource usage. Make the subject “test group”. Thanks!

When do we expect that early version?