Very strange. I haven’t seen any other reports of this with the new software release. What OS/hardware are you using?

~EDIT : @Ken, can you tell me what does these messages signify? How does the publisher of an application change and in what way does that impact the workings of the application?
“Application no longer signed” - Are you referring to the digital signature? and does that mean some malicious app tried to inject code into a legitimate one?

I think I can answer your question. Sometimes if the publisher changes it doesn’t mean anything. For example if Google signs their application with Google Inc instead of just “Google” then it’s probably OK.

When we say “no longer signed” yes we’re talking about a digital signature. If an application goes from being signed to completely unsigned then it would be something I’d worry about. I have never had an application become unsigned while using GlassWire but our CTO has and we found it was a bug. We think we have fixed that bug though. If you are having this problem with the latest GlassWire version please email us the details and we’ll try to recreate the problem and fix it.

Thanks for the response.
I cant recreate the problem at will, as it happens randomly. I’ll try to isolate when and how its happening and report you guys back.

The current status when the application is signed is posted below. I’ll be monitoring what services are being used then the app goes unsigned and changes publisher.

got this same alert on windows 8 after a microsoft update.

+1
I can confirm this happens when installing MS updates or even with some applications.

`EDIT: If you guys could add a feature which displays an alert when windows update starts installing patches or maybe an alert when a new software is being installed on your system. That would be great, if its feasible.

Still happening - very weird that only some people see this. Either it is standard Windows behaviour when updating/changing system files or it isn’t ?

UPDATE : Proved its not a bug in GlassWire here Applications no longer signed, and publisher name changes

Happened to me today, 64-bit Windows 7. Screenshot at: 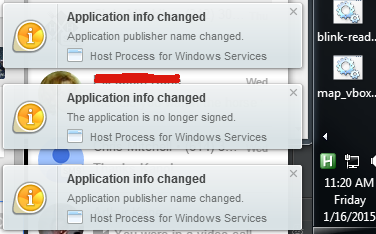 Thanks for all your help on this!

I am having the same issue. I also am unable to scan the file…when I click ‘Virus scan’, it just comes back as ‘unscanned’ again (doesn’t change to green ‘clean’). This process also is connecting to other network users (under ‘hosts’) and I have no idea why. I have sharing turned off. Blocking it in the firewall turned off internet connectivity, if that helps narrow down what its doing.

Did others have this behavior along with the signed/unsigned process? 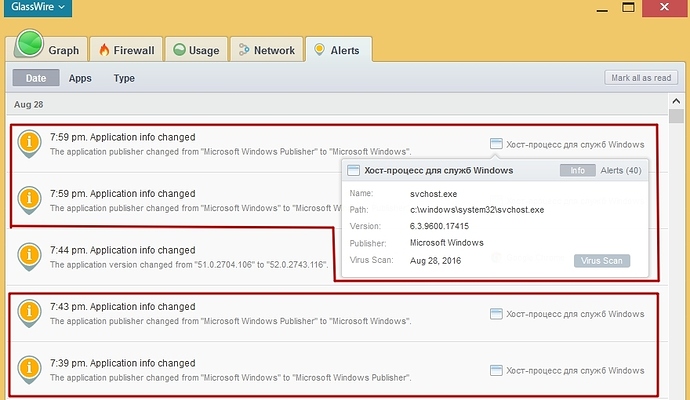 @pronin I have never seen that before. The version # didn’t change?

Hi! Version does not change.

@pronin Can you install our latest version with the “clean” option and see if this happens again? Is there anything unusual about your operating system or software you have installed?

I have had the same sort of alerts many times. Here are the latest - I can only ever remember seeing them for svchost.exe:

blob.jpg1091×351 90 KB
The application version does not change for any of those alerts: 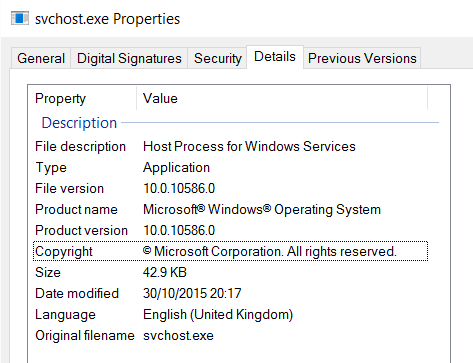 I will report this to the team, but I’m pretty sure none of us have ever seen this before. I wonder if you two are running some kind of similar software or system that causes this somehow?

It is possible. At present I don’t have those alerts on my other computer.

Can you install our latest version with the “clean” option and see if this happens again? Is there anything unusual about your operating system or software you have installed?

Was Windows 8.1 (x32) with dozens of programs. After installation Windows 10 Pro (x64), the problem disappeared. BUT, now writes “Unable to install Bitdefender engine.” (Windows 10 Pro (x64), no other programs and clean, the latest version of the 360 Total Security + GlassWire.)

I’m not sure I understand the Bitdefender problem. We don’t have that Bitdefender error with GlassWire, so I guess it’s just an error with Bitdefender that’s unrelated? Sorry for any confusion.