My computer have both wifi and ethernet connected and on load but Glasswire only monitors and records the data of wifi. Can I have Glasswire to take care with both?

For GlassWire on Microsoft Windows, GlassWire should monitor ALL data, ethernet and WiFi, but not separate it.

Are you saying that your ethernet data does not appear in GlassWire at all? Are you 100% sure of that? Why do you think that’s the case? These details will help me diagnose the issue.

Normally GlassWire just shows all network activity in Windows. I have never heard of GlassWire missing just WiFi, or just ethernet activity and it would be highly unusual.

Please include more details about your network and how it works if possible. Is there anything unusual about it?

Thanks for the answer. Maybe I know why I thought that. Because Glasswire is showing half of the actual bandwidth compared to task manager. At that time both connection have about 10Mbps upload and wifi have few download and with no download in ethernet. And the same time Glasswire shows about 10Mbps upload and few download so I thought it only shows data of wifi. But when the load slow down I found that Glasswire shows nither of both but only less than half the bandwidth. I took a screenshot about it and in another one I killed the wifi but the result remain the same. Sorry for the graph in chinese.

How does your PC use WiFi/Ethernet simultaneously? I have never tried this with Windows myself, but is this a normal thing with Windows or do you use some type of specialized software and network?

Or am I misunderstanding something?

I searched around online and found it’s actually possible to do this which is very interesting but I was curious if you could give more details on how exactly your system is set up? With this information we can try to recreate the issue on our end.

I found this web page https://windowsable.com/use-wifi-ethernet-time-windows-10/. Is this the system you use to have WiFi and Ethernet working simultaneously, or do you use another method?

These details will help us test and try to recreate this issue.

GlassWire should detect all network data for WiFi and Ethernet due to the Windows API we use to detect network activity.

I think there is nothing fansy in my PC. I just connected my PC to two routers by wifi and ethernet which dailed to two differnt account, and it works sometimes. 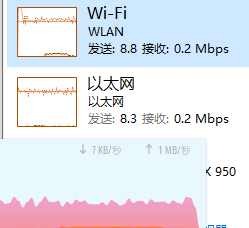 Also Thanks for the imformation your provided and the effort.

If you turn off WiFi and only use Ethernet does everything look OK, or no?

What about vice versa? Then you can be sure there is a real bug. Meanwhile we’ll test. We read a Windows API for network activity so there shouldn’t be a way for us to miss traffic. The task manager probably uses the same method to read network activity that we do.

I tried to disabled WiFi or Ethernet and both time Glasswire monitored correctly but I enabled both it isn’t correct again.

And I think it is something about Windows itself. I guess when there are two connection working, one will becomes “main” and another will becomes “sub”. And based on my observation, the charactor sometimes change, sometimes the Ethenet does full speed and WiFi goes slow or vice versa, sometimes both could go full speed. Now my WiFi doen’t work.

It’s all about my observation though.

I read the artical you sent me. Maybe my guess is right. But interestingly, sometimes both connection can run full speed

If anyone is interested, here’s some background on the issues with multiple network adapters.

Windows desktop versions are designed to allow more than one active network adapter to run at the same time but the primary purpose is to allow connection to two different networks (such as for Internet Connection Sharing or Network bridging) not to have two Internet connections through the same router/gateway.

The primary objective in Windows network configuration is stable routing of IP packets. The secondary objective is high throughput. The two are highly interrelated in practice. But if a packet “disappears” because it is improperly routed then it doesn’t matter how high your theoretical throughput is because there will be a delay while error correction rectifies the situation.

The problem is that most users only think about throughput and aren’t aware of the many issues that arise from routing issues. That’s why users think “I can use both my wired and wireless connections at the same time and get more throughput, after all my router can handle it.” They don’t think about how much additional overhead and issues there are that are created by having multiple routes to the Internet. Here are some of the simpler questions:

That is why, if you want to run multiple adapters to the same network gateway then Windows desktop is not the best product to do this because it requires advanced routing features that are normally only available on the Windows server products, although Windows 10 desktop does have more of them than earlier versions. Then you should also get an advanced router (not a consumer device) that will have the features to support this.

Exactly as said:
When there is a wired connection and a wireless connection then the wired connection will normally have the highest priority because it has higher bandwidth, lower latency, lower packet jitter, and fewer drop-outs