I was surprised today to look at Network and see the impossible.

– Two items are listed with the same IP address. 10.0.0.10
Netgear Genie shows the :4BF9 MAC as an offline wireless device which actually does have this ip address…

– One item (a printer) is listed with two different MAC addresses. If I select “IP”, both printer items shows with IP 10.0.0.9 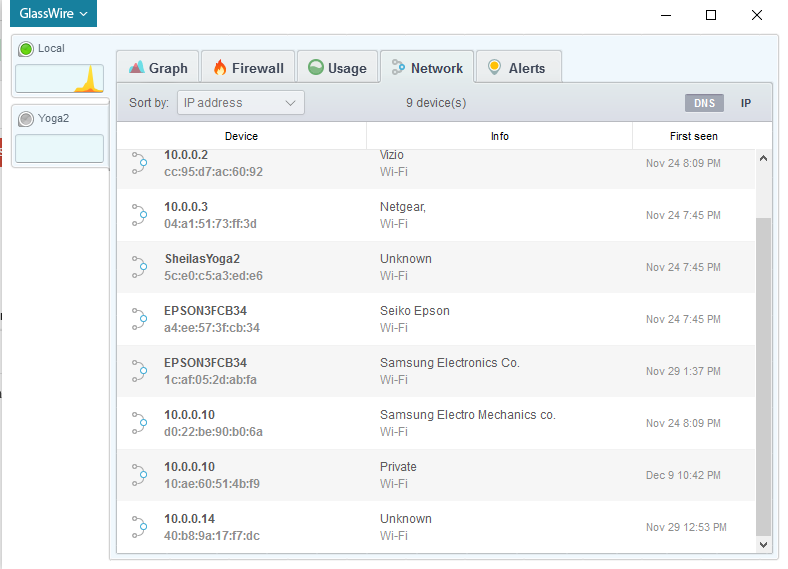 Thanks for reporting. We’ll investigate and see how this could happen.

I should have thought at the time to stop Glaswire and restart it to see if these “double” entries cleared.

When I looked today, they were still present. I then restarted (using “Exit” from the active task icons), and then restarted. The duplicates did not show. The printer shows, but only as an IP address without the Epson identifier (though Seiko Epson shows as manufacturer). The 10.0.0.10 item that shows in Netgear Genie (still) as not active, does not show at all.

If this repeats, I’ll try restarting Glasswire at that time to see if the same things happen. In general, I’ve found that nothing that ever appears in Network ever stops appearing unless I actually restart Glasswire – it does not display the real-time or near real-time network devices in a manner similar to Netgear Genie which actually updates itself.

I revive this because it’s even funnier here. I am VNCing to my home right now to check stuff, tens of kilometers away from home and it actually shows my PHONE in the network, which I have right here, and yes I double checked the MAC address so it isnt wrong

We are completely redesigning how this system works for 2.0. Thanks for your report.

but how do you do it in the first place? are you pinging the whole subnet every once in a while?

I think it’s a Windows API if I remember correctly. For us it has been reliable but some types of routers seem to run into issues.

well okay, but it certainly intresting on how they would check this? the only way that doesnt decrease performance greatly is scanning DHCP messages, but that doesnt tell the network when a device leaves and pinging the whole network down is not funny especially if you are in a 10.x.y.z network (usually a /8 submask meeaning tons of possible IPs)

I would expect GlassWire to look at ARP because IP devices will broadcast ARP requests. But I notice that the GlassWire list and the ARP table never match. But then my router DHCP list never matches GlassWire’s device list either.

For anyone who is interested, in a Windows command window the command to display the list is:
arp -a