I’ve already stated that Network does not show the machine on which I’m running Glasswire – it should. Here are some other problems with this display:

SheilasYoga2 show the manufacturer as “Unknown”. As Lenova is probably the largest manufacturer of PC in the world, it should be shown properly.

I’m not sure why Rich-PC would show as Intel Corporate (perhaps the processor?) as it is a Sony VAIO.

10.0.0.39 is not an Intel Corporate either, but is an HP laptop and its hostname is not shown.

The display is not current – specifically 10.0.0.36 is not connected at this time and is not a Netgear device.

For this current network, Genie shows a network extender at 10.0.0.2. Genie also has a bug (reported) in that it does not show the Yamaha device that is connected to the extender (the name shown below is a custom lable) – your display does not have it either. 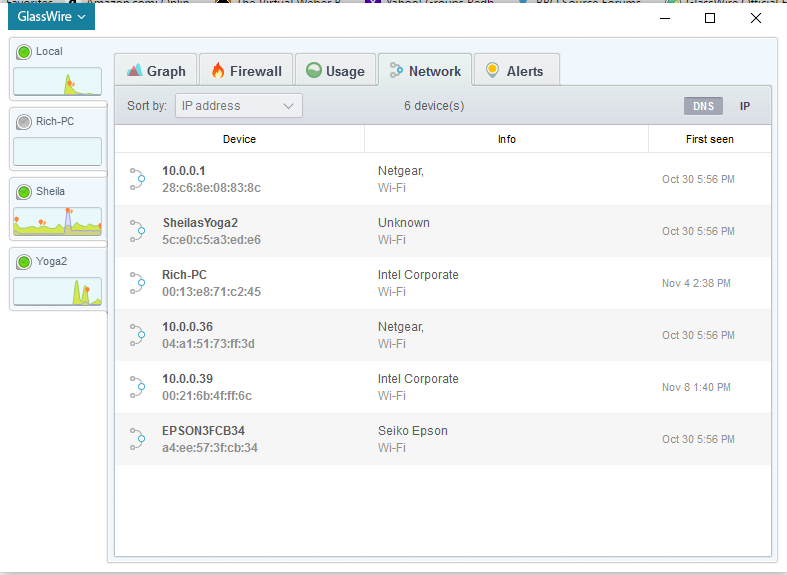 Here is the Netgear Genie display of my network. All these devices should appear on you Network display. (If you hover the icon over a device in Genie, the ip addr will show. If you click on a device a detailed description will show.) 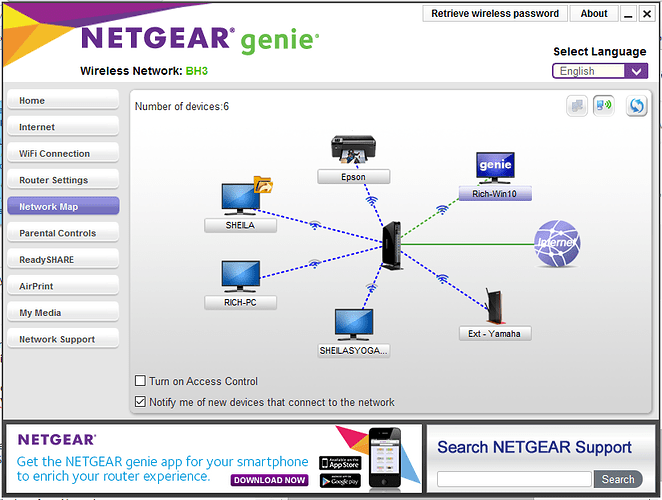 I hope all this will help.

One key item that should be displayed on the network is the Gateway. Note that the Genie display has a (useless) icon for this. I would like to see the gateway in the Glasswire display with as much information as can be gleaned. At least tell me on this display what it’s ip addr is and what the DNS server(s) is(are). While you send an alert when the DNS server is changed, you don’t put it in this Network display.

We currently have some limitations due to the Windows API we use, but we hope to increase functionality like you request in the future. I agree that these are great ideas. Thanks for your feedback.

The Network display is the reason I got a paid version. Love the program but as the OP stated it does not show the PC Glasswire is running on.

The reason I wanted to know is all of a sudden when I try to log into my router [Netgear] it tells me there are too many connections [there only 5 and it should support 32] and I was concerned someone else is using my network.