Frequently, when I minimize the Glasswire client or close the display, when I re-open the window, the left side of the display is corrupted. I have had this happen with both two and three remote servers displayed. The mini-cliient image seems to consistently have two problems. There is always one less mini-window than there are remote servers running and there is about a 1/8" white gap between the mini-windows and the main local display area. This has happened several times a day, but is not replicable at will.

The workaround to the problem may be simply opening up the window display into full-screen and then back – at least that worked once.

Thanks for reporting this problem. I haven’t seen anyone report this before, could you send a screenshot via email or post it here? Are you using our latest software? Thanks!

Here is the Glasswire window after I just re-booted to try a suggestion about the remote connect problem. This display is missing the Yoga2 mini-window. Once again, making Glasswire full screen and then going back to a window fixed the problem. 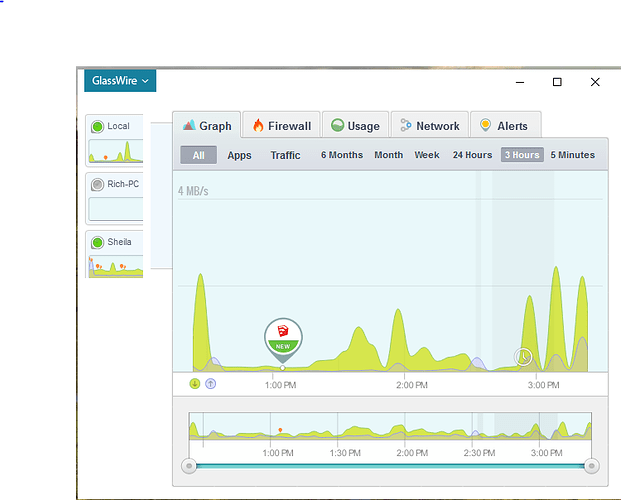 Could you please try update video drivers to the latest version?

Good thought. I updated the drivers. I’ll let you know if this problem recurs.

Edit: Hours later after a reboot, the same problem occurred. New video drivers did not resolve.

Do you have the same problem on all your computers?

I haven’t seen it, no. But I use this machine almost all the time. And this is the only on setup as the client – the others are remote servers. I have tried to set two of the others up as a server just to test the connection, but (as I’ve said elsewhere), they have not been able to connect just as this client will not connect to one of those.

What video card do you have?

This is a laptop with an Intel HD Graphic 4400 chip.

I want to be clear about three points:
1 - I guess that it’s obvious that this only happens to the Glasswire client – that is the mode that shows the remote connected servers in mini-windows to the left of the main Glasswire window. And, btw, this doesn’t appear to affect any other applications running in windows.

2 - After re-starting over and over for various reasons, it appears the this problem only happens after a machine re-boot when I open up the Glasswire client for the first time that session. It does not happen if I simply “Exit” from Glasswire and then restart it.

3 - The workaround (open a full-screen and then return Glasswire to window mode works every time to clear the issue without fail.

Edit: In my OP, I also said " I also think that when in this state, I cannot change my remote server focus." That is not correct and I removed that line from the OP. I checked and, yes, I can change the focus even though the display is corrupted. (But, having found the workaround, I always clear the problem when working with Glasswire.)

Ok, one more piece of info. This display anomaly is NOT just on the one machine. On the other Win10 machine – the one I’ve not been able to make a remote connection with, I have also tried to set it up as a client to try to reach my “true” client as a server. No success with a remote connection in either direction, but both machines do have a blank mini-window for the server that won’t connect (as can be seen in the clip shown above). I rebooted that other machine while it was acting as a client (after trying some new cleanup and again completely stopping the firewall). When I first opened the Glasswire window, the mini-windows for the local client and for the non-working remote server popped up with this same odd corruption. And, as always, changing to full screen and then back to a window cleared up the problem.

So, Tom, that answers your question from above.

So it seems it’s some Windows 10 compatibility issue.

What video do you have on your second computer? Does it embedded Intel too?

Yes, all my machines are laptops so all have embedded video chips.

I agree that the fact that the two machines involved run on Windows 10 means that we must at least consider the possibility that there is a Win10 issue. But that’s why we report bugs, right?