So what I was thinking is that inactive apps is very useful but it takes quite a while to mark as inactive. So is could there be a feature to batch remove apps, and also to hide apps you already have firewalled? That way the firewall page isn’t so crowded when you have a ton of different services.

Perhaps I’m misunderstanding, but if you’re using our latest software you can mouse over “inactive apps” and do a mass deletion.

I understand the rest of what you’re saying, about hiding firewalled apps. Thanks for your feedback.

Ah, yea that I understand sorry if it was worded poorly I just meant because I can’t choose how long until apps are inactive.Even if I can just remove the prompt each time I remove an app. Also is there a way to hide or minimize apps that are blocked?

Perhaps we can add a setting for “inactive apps” in the future that lets users pick time periods.

There is no way to hide or minimize apps that are blocked unfortunately. I think we worry that people will block something, then be unable to unblock it since it will no longer be in the list.

Ah I understand now about why you worry about minimizing them, could you hide blocked apps like inactive apps perhaps through a setting that way it you can warn a user?

Perhaps I’m misunderstanding, but if you’re using our latest software you can mouse over “inactive apps” and do a mass deletion.

I understand the rest of what you’re saying, about hiding firewalled apps. Thanks for your feedback.

Thats great for inactive apps. but what about the others. I would like to see a option to clear them all. clicking the " x " next to each one by one is tedious.

FYI, this may not be what you need but we do have a “profiles” feature that allows you to make new profiles for your firewall. It can allow you to mass reset it, but it doesn’t delete everything.

In the center of the firewall window is the “Firewall Profiles” option. You can create and save a firewall profile depending on your location, or how you use your device. For example, you can turn on “Ask to connect” mode and deny everything but Internet Explorer so nothing else accesses the network. You can then use this profile while you’re on a metered Internet connection to save data usage.

This is an old question, and I’m not sure there will be an answer, but I would like to avoid repeating a question.

This is to ask that we can also remove an application from the firewall even if it is said to be active or still present on the system (of course this will ask for authorization again, but this is partly the aim)

There are many reasons for this and I will not attempt to make a non-exhaustive list, but it is strongly linked to the ability to control and secure the firewall.

The simpler it is to add, remove, control, revalidate blockages or authorization, the more it allows you to always be sure that it is working properly.

And there are a lot of installation programs that make you have to authorize them, and whose name is very simplistic, and you end up not knowing which program they are attached to, and you cannot remove them from the list because these remain present on the system for uninstallation for example.

Example: I have several “Setup / Uninstall” and unless I do it one by one to look in the details it is laborious to ask if we should block for security or can leave, I would rather remove it, so if whatever happens, I have an alert that will tell me that a certain program is trying to act and if I am making a modification of the program it will be logical, but otherwise I will be able to ask myself questions, and do research , while blocking everything out of fear makes it more difficult to use.

It will also be easier for general public users to understand that if they want to remove the application they can and should not search the net, and understand that it can only be blocked or must remove all traces of the front system.

Sorry for this long answer, but I hope that this will show why offering this also on so-called active applications is not useless.

This is to ask that we can also remove an application from the firewall even if it is said to be active or still present on the system ( of course this will ask for authorization again, but this is partly the aim )

Perhaps I am not understanding, but it is possible to remove any app from the firewall now even if it isn’t inactive. Mouse over the app icon you want to remove and a small x will appear on the right side. 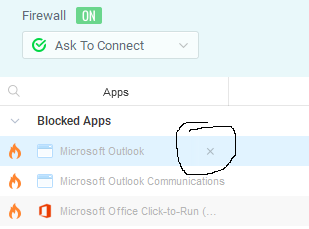 It’s my fault, indeed, I saw just after that there was the cross that was available on the line but as it only appears when the mouse hovers over it, I did the dead end because I was searching by clicking on the program name and in the popup and only seeing the details there and thought it was not there.

And indeed there is the mouse-over option, so what I asked is not at all relevant!

Thanks for your feedback. Maybe there is a way we can make this more intuitive in the future.