Some hosts seems not to be capture into the db

I only have one example for the moment but it’s consistent since it’s happening to all my hosts.
I am linked to some mattermost servers and I know from my pihole and nextdns setups that thoses hosts are making calls to api.segment.io
But I can’t find it anywhere in my glasswire db. On none of my hosts where mattermost is installed. And because I had a problem with some blocks on my setups according to mattermost and so my different filtering system which relied on api.segment.io. I can’t find it anywhere in glasswire. including about the ip address.

GlassWire has an Incognito mode for apps, and for total network activity. Could your app, or could have GlassWire been in this mode?

Normally I’d ask to collect some logs or something that could help us investigate but we’re preparing a major update that has a completely rewritten backend.

I don’t recall anyone ever reporting GlassWire just missing a few random hosts though. Either GlassWire doesn’t work at all because its service is stopped, or it works.

I m going to give you an example with cdn.segment.com right now

So here it is. As you can see the pihole register an attempt yesterday. This pihole interface is on a raspberry pi4 connect to my tablet through usb thanksfully to the OTG of the pi4.
So this is on a different network which is here 10.55.0.0/27 here. It’s not my default gateway of my tablet I just direct traffic to that pi4 for dns and sock5 and http proxy.

And as you can see on the image, where glasswork should have put this entry of cdn.segment.com (alphabetical order of the hosts) there is nothing. 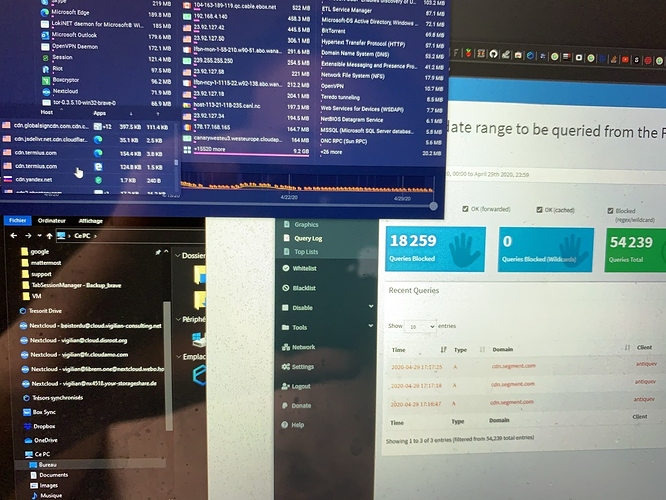 So is there an explantation to that ?
For the other hosts that I talked about (since here is more an exception due to the setup) the dns resolver were on the different vlan but still the dns requests were going through the default gateway.
So I guess the network address here is not relevant but I wanted to be thoroughly.

I don’t know much about your network but is it possible whatever is accessing that domain is using some kind of DNS over https or something similar? Firefox does this by default now. Perhaps your router can see it but GlassWire cannot for some reason.

DNS over HTTPS (DoH) is a protocol for performing remote Domain Name System (DNS) resolution via the HTTPS protocol. A goal of the method is to increase user privacy and security by preventing eavesdropping and manipulation of DNS data by man-in-the-middle attacks by using the HTTPS protocol to encrypt the data between the DoH client and the DoH-based DNS resolver. Encryption by itself does not protect privacy, encryption is simply a method to obfuscate the data. By March of 2018, Google an In...

If you go to GlassWire’s settings is this box checked or not? I have found on my own setup unchecking this box has more accurate results these days. We will have it unchecked by default on the next GlassWire update.

GlassWire still looks up hosts with this unchecked but it uses a more accurate technique to do so. 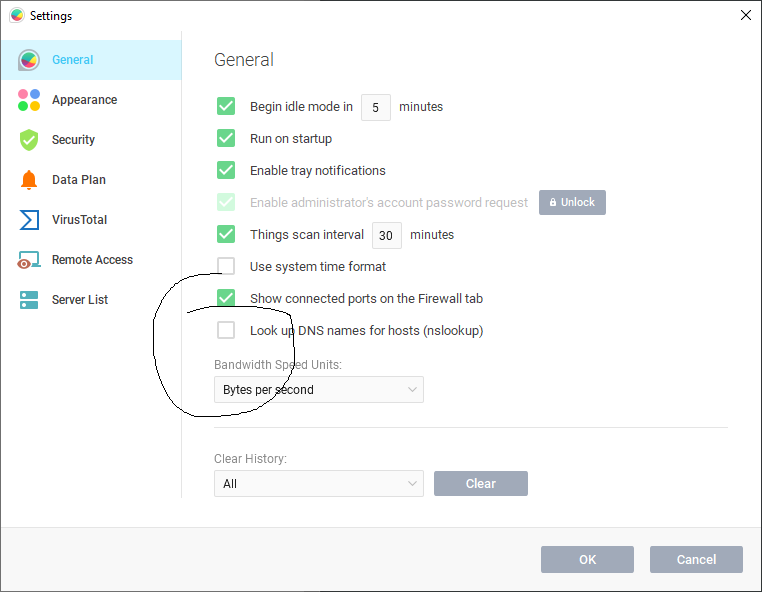 whatever is accessing that domain is using some kind of DNS over https or something similar?

No it’s not possible because pihole only listen to clear udp request from the internal network and then send it over internet in an encrypted format if requested. (It s a bit more complicated than that) but the point is the dns requests are always in clear format on glasswire hosts. At least for those request. Especially since it was coming from a browser but chat application like mattermost.

And the option you are pointing is indeed checked.
Do you want me to monitor it for a week or so ? Or maybe the release will be there already?

Actually even for Firefox or other browser, my dns requests are always in the clear since I specified to them to always send it through my pihole instances first so outside my proxy etc
So there is no way the dns were encrypted. If it was pihole couldn’t have taken them into account and simply refused them

I just sent you a private message. Access it at the top right of the forum. I included a link to our beta our testers are currently testing if you want to use it optionally…

If you want to wait until our final update I understand completely. Thanks for reporting this issue in detail.

I don’t know if I will have the time to actually install it in proper condition to test it. I still have a lot of work.

But I think this problem is a major issue and can easily be passed under the radar because people don’t have their own dns resolver to compare data.
So if this is a problem with the core of glasswire itself we should investigate even more.
So if you need more information about it, just tell me what you need and I can provide

GlassWire collects data from a Windows network monitoring API. It’s the same that the Task Manager uses for example.

If there is an issue with the “core” of GlassWire then I feel like it would be an issue with Windows itself, because the real “core” collecting network data is a Windows API.

But I guess anything is possible with software.

It appears you are busy but I would encourage you to use our next public non-beta update and see if the problem continues. Then we can investigate further and solve it with our completely rewritten updated backend that will be part of the next update.

We have also added in the ability for users to turn on more logging with GlassWire itself optionally to help us find bugs/issues in the future.

Our team is 100% working on this new update so that’s why we can’t really go back to a previous version right now, and that’s why I suggest trying the update. It’s possible whatever happened won’t happen again since the backend is completely new.

Promise, if I have the time to restore some Linux host that I haven’t been able to install properly, I will install a windows Vm with gnome boxes under fedora 32 and I will install your beta, I still not sure how I m going to link it up with a specific pihole to separate the data yet but if I find a spare raspberry or some space to make a vm on one of my server I will do it.
And yes maybe it’s a problem with networking api. It’s not the first time we have bugs in windows updates so… as I said it may take some time

Thanks for your detailed report and please be on the lookout for the future public update.

Related question - how long does Glasswire hold on to logs? Don’t see an option for that in the settings, but the graph view shows an “unlimited” option. Does Glasswire have a time limit or size limit on log retention? Thanks!

There is no size limit.

Logs are on your own hard drive and we can never access the info since it never leaves your device.

You can also make any individual application Incognito, for example any web browser. Go to GlassWire’s firewall tab then click the app icon you want to be Incognito, then choose “More” then “Add to Incognito”.

Awesome. Was hoping for forever since I have elite. Thanks for the reply!