FYI, the latest version 1.2.96 produces System file monitor alerts for Hosts file changes. I hadn’t seen this for a few months. I planned to confirm the bug before I reported it here. But instead the new version resolved the issue: 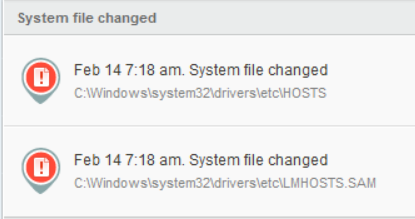 In case you think it was a settings change - I always have all alerts turned on:

Yes, we had trouble recreating this. I found this problem on my own machine but it did not happen on the machines our development team uses for some reason but they were able to find and fix it.

I’m taking it whenever you install applications that monitor your network/networking card on your computer it gives you that notification.
I got this message when I updated to the newest version of glasswire.

GlassWire will alert you to any network related file changes, for example your host file. What change did it say you had, and was the alert accurate or not?

Well, i’m hoping that the alert messages was for the new installation and not for anything else.

The alerts said this:

I looked in the files and it seems like an IP was added, an localhost. I’m taking it thats glasswire.

So I recently upgraded to win 10, and then just about a few hours ago there was a new update to Glasswire. As soon as I updated there were alerts, saying that system file was changed. This had to be glasswire, as it happened as soon as I updated.
But if it wasn’t, what could it be? Surely it wouldn’t be a security risk,

Thanks guys. it must be a bug. We will investigate and try to reproduce this.

Hi there. Any progress on this issue? I just updated Glasswire to the latest version and got the same LMHOSTS.SAM warning in Glasswire right after install. (Windows 7).

If you check the host file was it changed? We fixed this in a previous update.

Nope, doesn’t look like it was changed. Last modified date hasn’t changed (2009-06-10) and the contents look like they do on a fresh install. So the bug was just that the warning popped up even though the file hadn’t changed? If so, that’s ok but good to know.