Things tab shows ethernet connections when should be WiFi connections

The Things tab/window shows all my WiFi-connected devices as “Ethernet”. Shouldn’t it say “WiFi” instead?

Are you on WiFi yourself (with the GlassWire device), or Ethernet?

I’m on Ethernet through a hub to the router.

It’s the same for me. If you’re connected through Ethernet it isn’t possible to see how other devices are connected, unless we interfaced with your router. Unless there is a secret way we don’t know about?

Well, shouldn’t it say nothing Ethernet if it can’t tell? The only device it knows for certain is connected by Ethernet is my device.

If I switch to WiFi then I get another issues. When I scan Things only one device shows up but Alerts shows many devices joining the network.

Here’s the Things - it doesn’t change after running multiple scans:

Here’s the alerts when the WiFi connection was established: 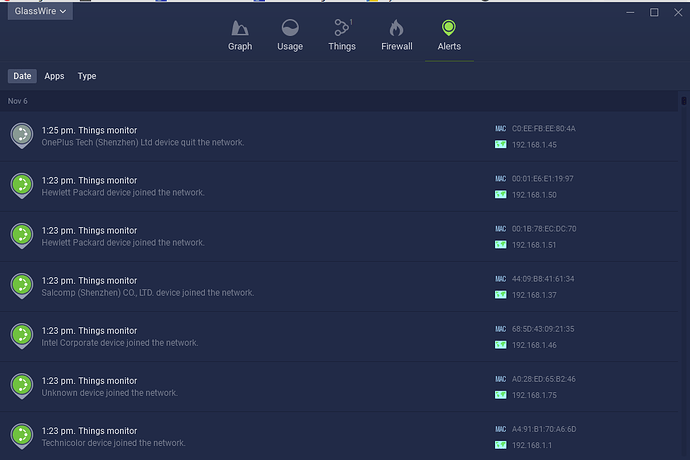 Now one other device has appeared on Things:

Alerts shows it disconnecting then reconnecting: 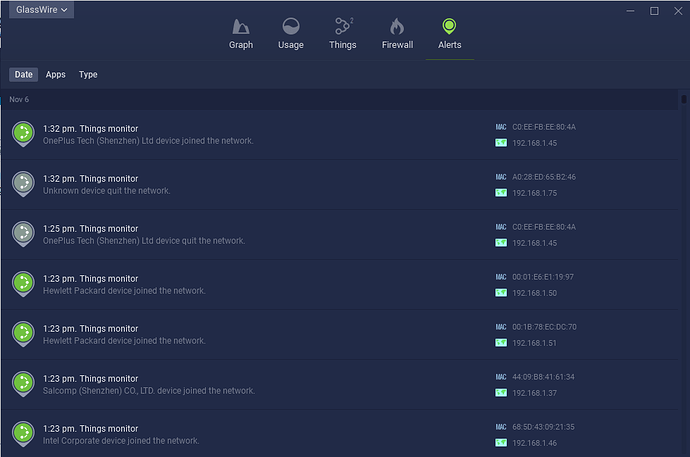 Perhaps if we don’t know the type of connection for sure we should just show a blank as the connection type. That’s a good point. I’ll have to ask the team about it though. Perhaps there is something I don’t know about.

For the devices appearing/leaving, I personally set my Things tab to show new devices only. Then devices leaving/sleeping/resting, etc… don’t give me annoying alerts.

Once I had a problem with my network where several devices kept going on/offline over and over. I then turned on GlassWire’s ARP detection and it started alerting me to ARP spoofing. I then found that two of these devices were fighting over a single IP address due to a network setup problem and I was able to solve it and fix the constant outages.

This probably doesn’t apply to your situation but perhaps this information will be useful to someone.

I generally have all alerts turned on so I can see how each feature works.

I also got alerts for some of the devices “rejoining”. I can ping them but I cannot see them on the Things view.

Able to ping them: 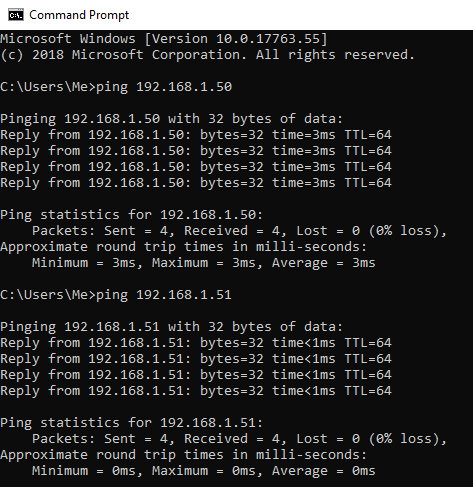 This situation would definitely benefit from having the device labels displayed on alerts.

I really love the “Things” tab, you may want to check Fing’s device recognition capability as it works pretty good, it can show some additional info (can be different depending on the type of device though) like the Operating System of a Smartphone (Android 7 for my Galaxy S6), the Router’s UPnP Name, NetBIOS name, it can identify Google’s Chromecast (and the exact model, for example mine is Chromecast Ultra, it also shows there as “UPnP Device”) and show its UPnP Name, my printer’s Brand (not only its MAC Vendor, Hon Hai Precision for example, that doesn’t mean anything to me) which is Brother Industries, SNMP Name and Description etc’
Fing also shows an icon for each type of device (Router, Extender/Hotpspot, PC, Mobile, Printer, Streamer/Chromecast) which helps with the recognition, I think it shouldn’t be hard to implement such additional information in Glasswire and it will make the “Things” tab even better!

Very interesting @Y4niv. Thanks for sharing this information.