I installed the latest version of PicoTorrent, that’s just been released, v0.15.0.

GlassWire v2.0.112 cannot tell the version number, and for the publisher it generates a NullReferenceException. See the attached screenshot.

Strange, I have never seen this before. I will report this problem, thank you. Did VT not show any problems with that application?

It took a very long time (just over 20 minutes) for VirusTotal to change from ‘Analyzing’, but it eventually did come back with a result. 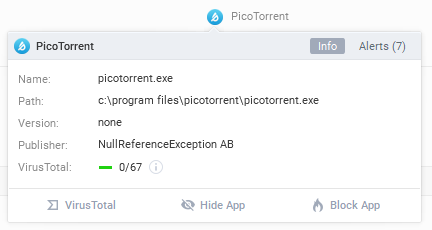 Our team asked if you could take a screenshot of the digital signatures tab? It will help us solve the problem.

It looks like the NullReferenceException is coming from the digital signature. So maybe it is just the version number issue that is still a bug in GlassWire. 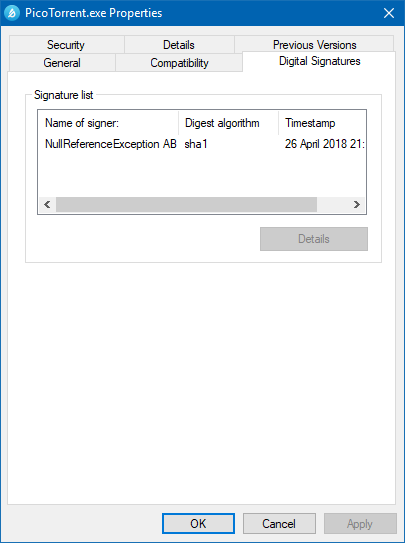 Hi, found this thread in an issue for PicoTorrent (which I run). NullReferenceException AB is the name of my company to which the code signing certificate is issued

You haven’t mentioned anything about the version number issue. Have you figured that out?

We did not try that app yet. I was hoping the developer might chime in and know the reason for the anomaly with the version # also, or maybe it is a problem with GlassWire? We don’t know yet.

It sounds like you guys need lots of spoon-feeding.

I don’t know of any projects where they fix obscure bugs with third party applications within 3 days (where two days are on the weekend), but if such a project/company exists then I’m very impressed.

We take bug reports via the forum, and our contact page. When multiple people make the same report then that report takes priority. We have a list of bugs we are currently working on in order of priority and we’re working as quickly as possible to make everyone happy.

The version parsing happens within GlassWire, so that is what needs to be investigated.

Speaking for myself, if I was the developer of an application such as GlassWire and someone notified me that my application was parsing the version number incorrectly from a particular executable (particularly, like in this case, a small application consisting of just a single executable file), I would be very curious why and so I’d quickly download the application and look at its properties. Even if I was only the support person for GlassWire I’d be very curious and so I’d do a quick download to check out what is going on so I could then have an informed, intelligent discussion with the developer. And also so I’d be in a position to provide a much more informed reply to the reporter of the bug, something much more substantial and knowledgeable than “Strange, I have never seen this”. Not only would that be satisfying to me, but downloading the tiny application and right-clicking to find out its properties would actually be even quicker than asking someone else to take screenshots, etc. for me.

Of course, the fact is that not everyone is curious-minded or technically-minded. It takes all kinds to make the world go round. But I would never shower praise on someone telling them they’ve developed a “Cool app!” if I’d never even bothered taking the few seconds to download their application, and never even tried it out.

And it looks like without my prodding, you had already abandoned the version number part of this bug report, or at least given that impression by not saying anything about it. And so after I decided to ask, it was then revealed from your reply that basically the reason you never mentioned/acknowledged the version number thing is because you were actually waiting and hoping that someone else was going to give you the answer, a developer who has no access to the version parsing code in GlassWire. And at the same time you revealed you had not download the 4MB file.

Actually, there are quite a lot of other projects where there are team members who are curiously-minded, who are very eager to dig into technical problems as quickly as they can and figure things out. On the other end of the spectrum, there are projects where the idea of downloading a 4MB file is an obstacle, an obstacle which might need to be prioritized and scheduled, perhaps even leading to a fix at some point if no-one else provides the answer.

I’m sorry if it sounds like we aren’t interested. That’s not true. I was just explaining how we prioritize bugs, etc… We appreciate your reports very much and sorry if it sounded like we didn’t.

It’s true I did not download the file yet. We have a special system in place to check applications and we follow those guidelines carefully for security reasons.