I am really enjoying GlassWire, I use it to prevent apps like Creative Cloud or others from updating while I’m playing competitive ranked games online, causing sky high ping and ultimate rage.

But, when I’m voluntarily downloading from firefox or steam for about 1.5mbit/s, nothing is shown on glasswire, except like 30bit/s from regular network things. 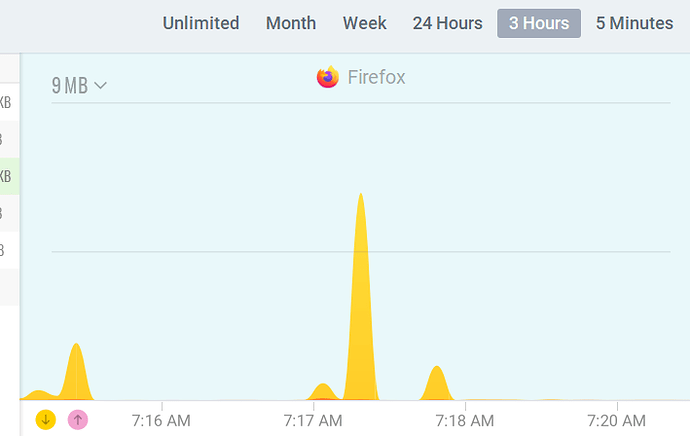 GlassWire works great with Steam and is actually on Steam (an older version) and I don’t recall anyone ever saying that GlassWire doesn’t show Steam.

We use a Windows API for network monitoring. It’s not possible for it to show some things and not show other things.

The only issue I could think of is that if you recently installed GlassWire we warn that you should reboot your PC after installing, or GlassWire won’t see network activity that was happening at the same time our Windows Service was installed. We don’t force you to reboot though. 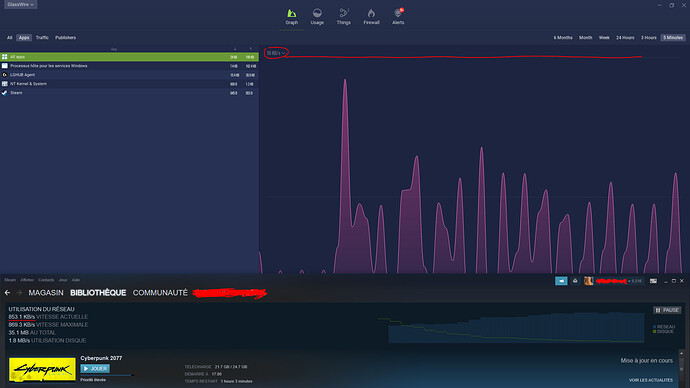 What is the UI below ours, is it Steam itself or something else? How do I access that UI in Steam if that is what it is? You are downloading “Cyberpunk” in this example from Steam, is that correct?

I do see a pause button, but in your case it’s not paused or is it paused?

Here is a useful article, and perhaps you can also check under “usage” to see if the data is correct there or not?
https://blog.glasswire.com/2016/06/15/glasswire-network-monitoring-accuracy/

The UI under Glassewire’s is Steam itself, the software (not webapp). I am downloading a cyberpunk’s update, at 853,1KB/s, and so the download is not paused. This is the page displayed when you click on your current downloads.

In the usage section, for the weekly period, Steam as used 234KB, which is wrong because has you can see in my screenshot, i’ve already downloaded >20GB of data just for this update

If you download the file from the Blog link, does it show up about the same as our test? Or does that not work either somehow?

Do you see a .dmp file on your desktop? Perhaps our service crashed.

I downloaded TF2 (it was free) on Steam and I got the results below.

The Cyberpunk game looks awesome but it’s paid, so I could not try that one.

Here is another screenshot of the graph below where some time passed. 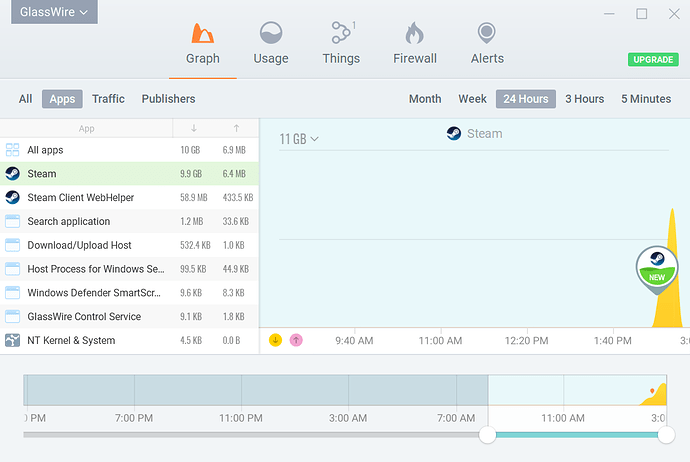 Yes, so the results shown in your screenshots are exactly what I would want to see. I might have a problem. As i’m writing this, i’m watching 2 livestreams (One from Twitch and another one from YouTube, in Firefox 87.0 (64 bits)) simultaneously and I still only have those results : 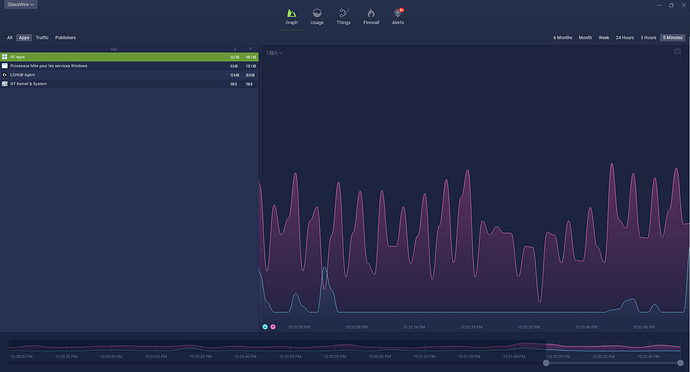 Please go to our top left menu and choose “About” and let me know what version of GlassWire you have.

Are you watching Twitch from this PC or a different PC? I don’t see Firefox in the screenshot.

GlassWire only detects traffic on the machine it’s installed on, are you looking at Twitch on another PC?

If not, please do this:

Maybe this is some sort of weird bug? I don’t get how it’s possible but I guess it’s happening, and I think the above should solve it unless you’re using some kind of weird network segmentation software or something crazy with your PC? Is there some kind of unusual VPN software (GlassWire usually works great with a VPN), or unusual security software?

Yeah I was watching those streams on the same PC glasswire is installed on. I will try to uninstall as you said. Rebooting etc. would not solve as this problem is occuring since a few weeks.

Just to be sure, uninstalling would not clear my license or anything ? 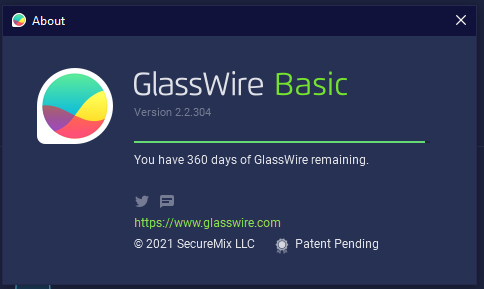 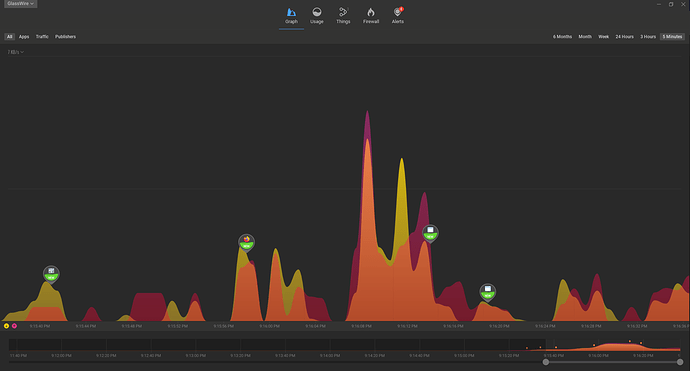 I’m not using any VPN or any fancy network stuff.

Edit: Same thing for Steam. I also tried twitch on internet explorer and it doesn’t show neither.

Just to be sure, uninstalling would not clear my license or anything ?

Even our clean install does not remove your license status.

What exactly is incorrect? GlassWire measures throughput data so it adjusts depending on the time period selected. It’s not going to look exactly like your task manager because it shows data for the selected time period.

I call this incorrect because as i’m watching a 1080p60fps livestream on twitch, glasswire shows a +/-7kb/s traffic.

So originally GlassWire did not show Firefox at all, but now it shows Firefox (after following the reinstall instructions) but all data usage is completely wrong somehow?

May I ask how your computer connects to the network? Is it Ethernet, WiFi, or something else? Is there anything unusual about your network setup with that PC? Any unusual security applications? Any other network related applications?

No, Firefox was shown before, at the very begining when I started using Glasswire. It appeared as “New” because I reinstalled Glasswire. My computer connects to the network trough an Ethernet cable directly to the box. About unusual things, appart from an expired windows 10 I don’t see anything. I could screenshot all my processes if it may help you ?

Please email me everything in the firewall list with a link to this thread so I know what it’s about. Thanks!

Also if you don’t mind Stream Twitch, then open GlassWire at “5 minutes” with the sliders as far right as possible, then choose apps/firefox (if you are streaming through Firefox). Please send a screenshot with the email.

I have good news. I just disabled windows’ firewall, and all datas instantly appeared ! 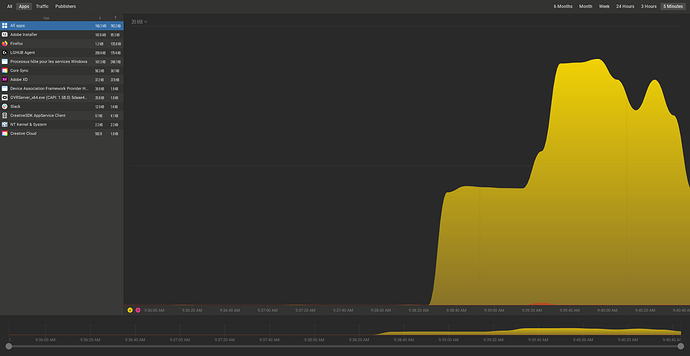 Well, now I don’t want to completely disable windows’ firewall, but I need to know how to do good settings to allow Glasswire to collect all datas.

Edit: I just re-applied default settings for windows’ firewall and now everything works perfectly. I’m sorry for this very time-consuming issue, and thank you for helping me this much.