Why does GlassWire use so much process power..?

GlassWire is using nearly 35% of process power of my CPU. Why does GlassWire need such process power…?
I really really like GlassWire. But I can’t use it because of this. Pls Do something.
Thank you. 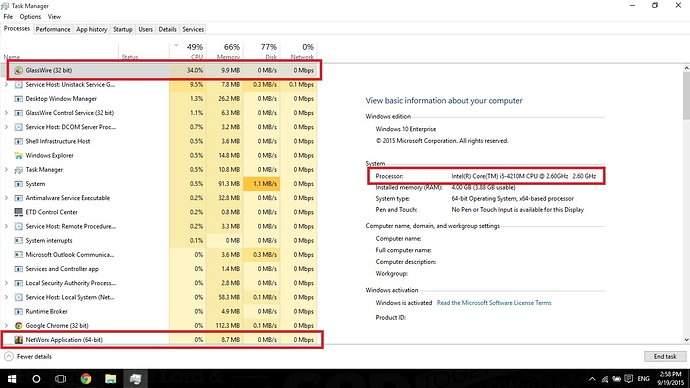 Was GlassWire closed when you took this screenshot? GlassWire should use almost no CPU when closed.

Can you try uninstalling GlassWire, going to the ProgramData folder and deleting the GlassWire folder, then reboot and reinstall our latest version?

Servo do you notice there are now several intel i5 users that complain of large amounts of CPU power being used ? . The i5 range is large the older ones have only two cores even some of the more modern ones. They arent a great step up from older processors.

Good point. We will try to test with that processor and see if there is a bug.

Thank you. I tried that. It work.

very low or no memory/cpu use by GW… Win10 ent… 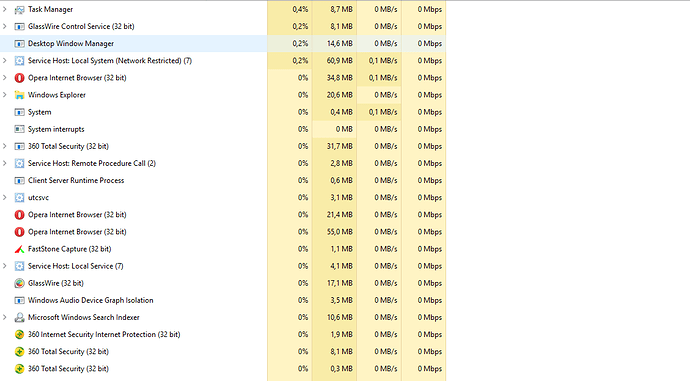 Is GW working properly in your system ? . A clue is in the combined memory use little or none is it on display ? and if not what does it use when on your screen . All my figures are for a shown display -approx 2 % CPU -approx 100 MB memory (combined GW ) your display shows -360 Total Security = 0 % ??? I would be VERY worried about that not possible in that app if working correctly protecting your system, what app are you using to display those figures ? 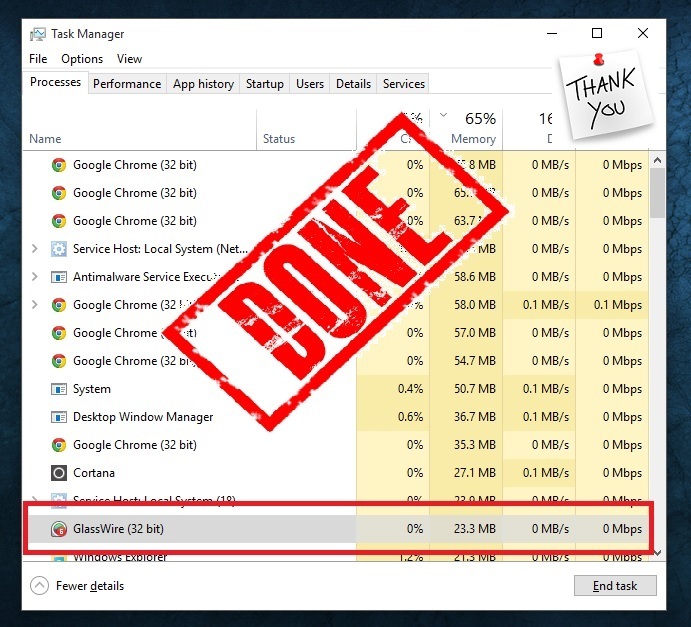 I just opened all apps i have, you give your score of situation now xD

I do have problem with GM with lock down not working, but it will be fixed in next update… But GM and TOT360 are working OK i think… I do believe that optimization in Win10 is flawless, but still, my Win10 is only a few days old, but looks very very optimized… I only don’t know, why does it start slower than Win7, Tot360 gave best startup time on Win7 8sec, average 14sec…and Win10, best 24sec, average 30sec…on other side, shutting down is opposite, Win10 shuts down sometimes in 4-5sec, which is awesome… 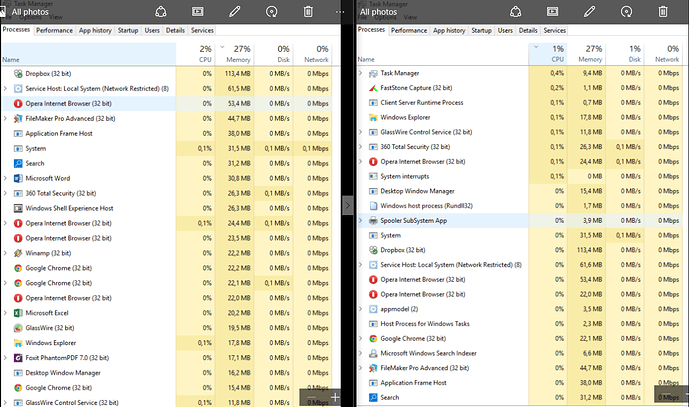 Glad you have made progress somi- a slow start up and 24 secs for Win 10 is slow is usually due to too many start up programs it does not necessarily follow if you install the same apps as win 7 the speed should be the same or better . It could be a process problem to me your photos dont show the truth about your processes they look very optimistic . Download =Process Hacker and install only from its own website -NOT cnet/download.com etc then run it and you should get a reliable display of your processes and the amount of CPU /memory used. This app is very reliable if Win 10 wont let you install it then its hiding something run it as Administrator. 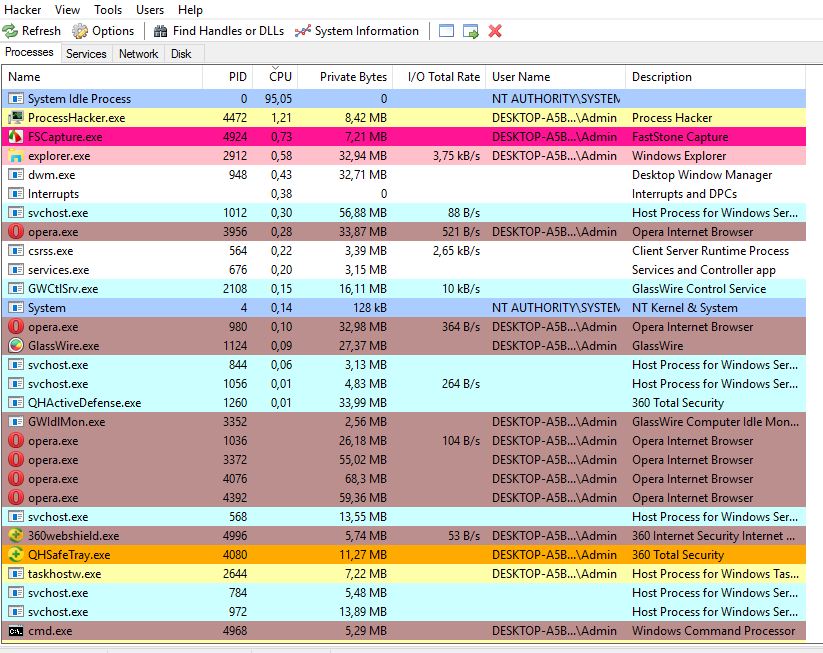 Well my next question is what intel CPU are you using --the latest 6000 Skylake series ? and have you over-clocked it ,also what Video card are you using nvidia/AMD -model number ? I have an old 3770K OC to 4.2GB with an old nvidia gtx 670 -at 2 GB as your usage figures are much better than mine and many others here .

Funnily enough we both have the same system idle figures of 95 % its the very low usage of GW I dont understand in you computer as I said mine is 2 % the only process using more most of the time is my system protection which uses 3 % when scanning automatically for any malware on the web/ network etc especially with your hardware that is installed -ah got it ! when I remove GW from displaying on my screen the CPU consumption drops to 0.02 % this is more realistic in relation to your figures so your figures for it must be when you dont have it on your screen. 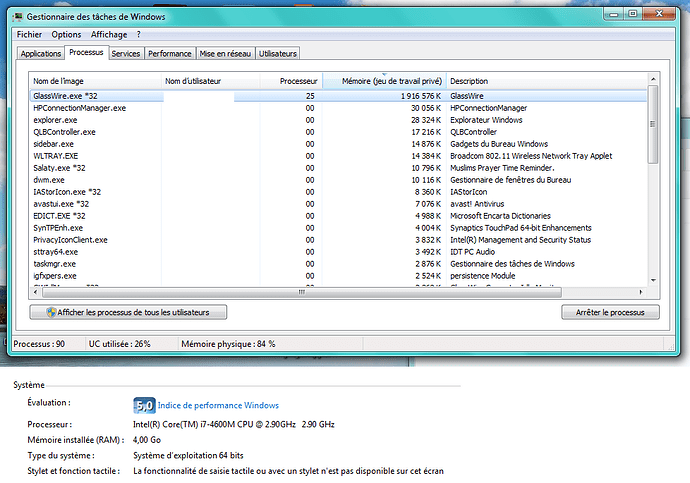 I like very much “Glasswire”, and I used it since few years ago.

But recently I’ve noticed that the app’ is using too much memory wihch forced me to close it,
I did what Servo_GlassWire said “uninstall then reinstall the latest version” but it still nothing ! as the picture show !

I hope to find a solution, because I like “Glasswire” and I don’t like to use an other app’

Thanks for reporting this.

Did you delete the “GlassWire” folder in the “ProgramData” folder after uninstalling? If not please try again.

Do you use Bittorrent?

I forget to delete “ProgramData”

Now, it’s working fine; after (1) uninstalling (2) deleting the folder in “ProgramData” and (3) reinstalling the latest version.

Just asking. Why do we have to delete ProgramData manually…?
it’s easy to delete it when its uninstalling. isn’t it…?

I use BitTorrent and sometimes uTorrent. So, if there is any problem, i like to know…

We’re working on adding an option to the uninstaller where you can delete it. We don’t delete it currently because if you delete “ProgramData” you’ll lose all your network history.