Here’s one view with the only difference being the window width are slightly different. (I edited this post to remove the pixel sizes because they were incorrect as I had copied them from the wrong place) 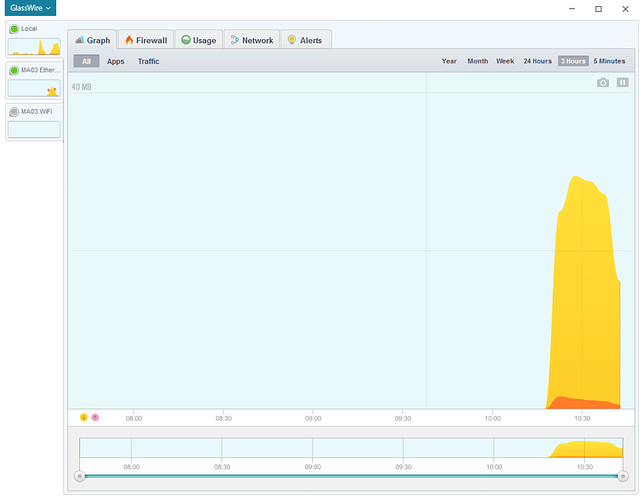 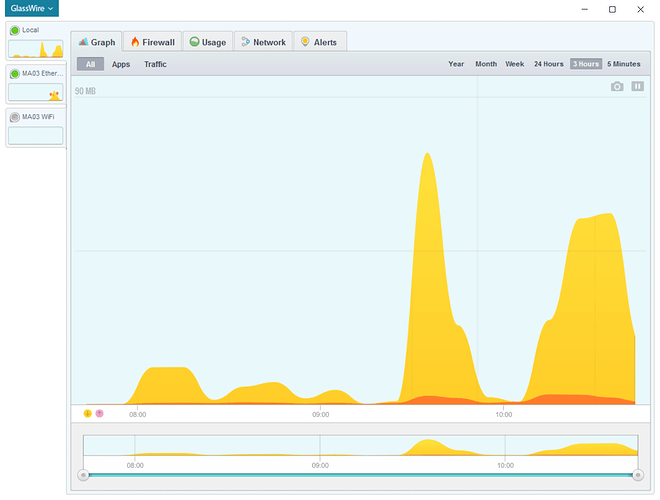 I’ve tried to reproduce the issue again but haven’t been able to get the scale to change so dramatically … so far.

Looking back at the same data, the bigger window was the more accurate: 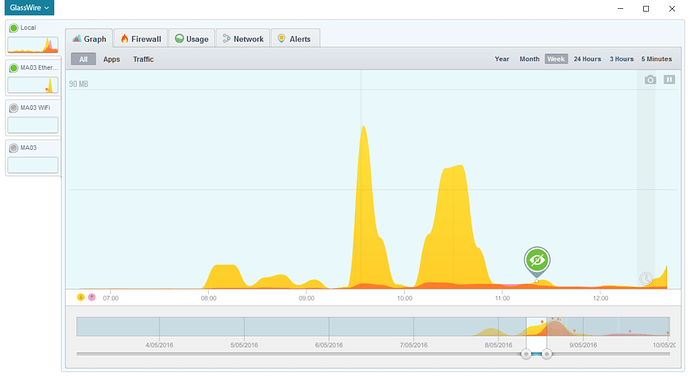 Thanks for your report. I didn’t reply yet because we were testing ourselves. Last night we were unable to recreate this problem on our own so maybe the public version we released this morning fixed it.

I suspect that the issue has been there a long time but it is an unusual occurrence and therefore difficult to reproduce.

It is probably very unusual
The difference in scaling for the initial screenshots was the ratio 90MB:40MB which is ~2.2 times. I haven’t been able to reproduce scaling that different using the default slider settings while changing the window size. The highest ratio I could get was 2 times. For the 3 Hours view I could only get 1.6 times. This suggests that the problem I found is unusual.

It is most likely to occur in the graphs for a day or less
In general, the greatest differences in scaling occur when resizing the windows for the Graphs for 5 Minutes, 3 Hours and 24 Hours. So it is probably unlikely to occur on the other graphs.

It may be more likely to arise using the sliders
If I use the sliders I can produce much greater differences in scaling from resizing the GlassWire window. So if I make the 5 Minutes graph show the full 5 minutes then I get a bigger difference.
1.5x 5 Minutes

The biggest difference I found was more than 5 times (60MB:11MB) by looking at less than one hour of the 3 Hours graph.

We released an update yesterday morning, please upgrade to the latest public version.

I am on the latest version.

I haven’t been able to reproduce the original problem but the scaling changes remain confusing.

Why does changing the window size change the scales so much? 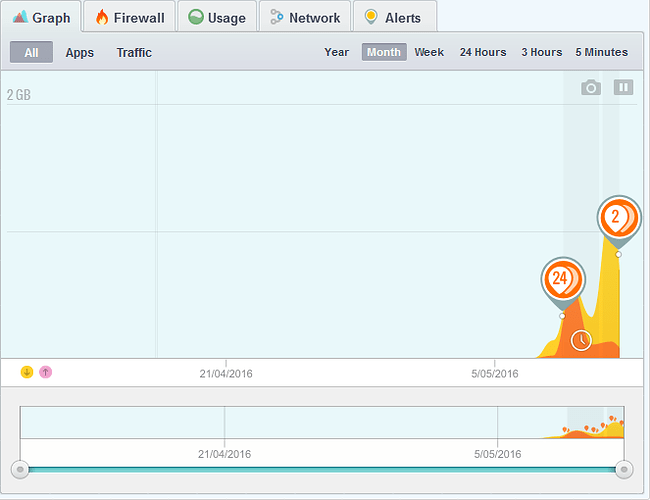 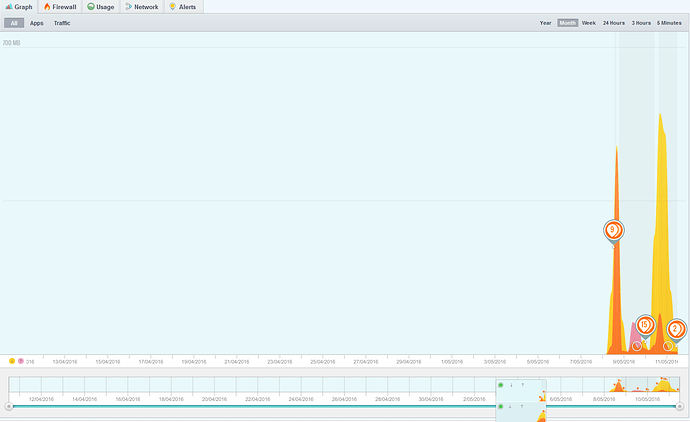 Thank you for your report. There could be a misunderstanding here.

When a GlassWire user changes the window size, the graph scale also changes. We can see some spikes if the window is small, but if the size is increased those spikes may be divided into several lower spikes. And vice-versa, for example, GlassWire is running in full screen mode and we can see several spikes and then when we decrease the size of the window, those spikes will be combined into one big spike.

The amount of traffic will be also recalculated so the top left value will change.

For example, we have two spikes in 10MB and 20MB and the top right value is 30MB. Then we’ve decreased the window size so those two spikes are combined into a single spike. 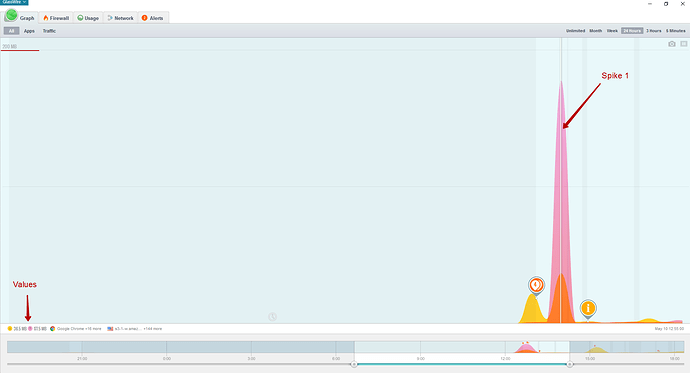 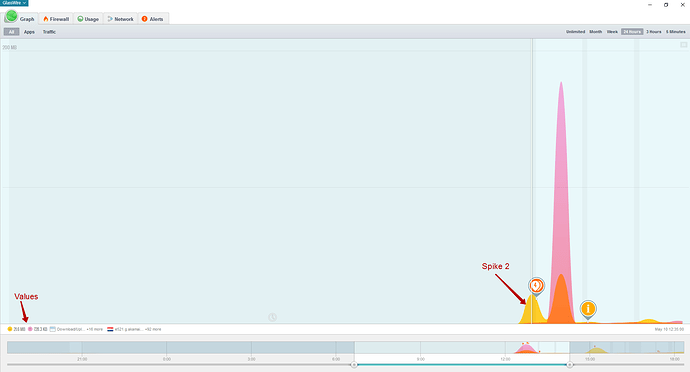 Now the window size decreased and spikes are combined. 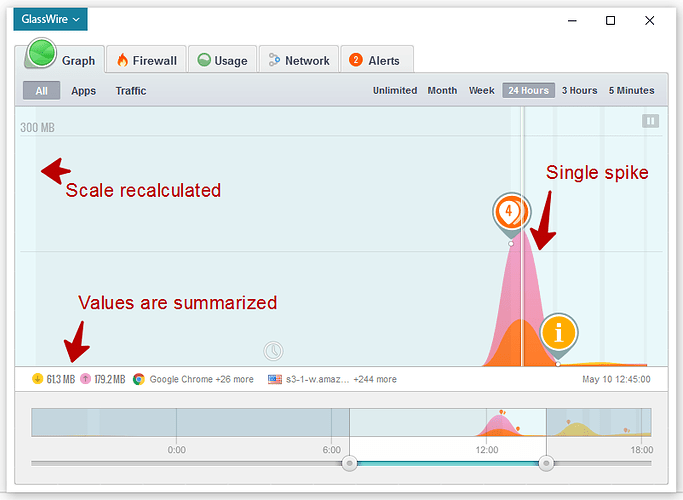 I hope this helps explain how it works. Let me know if you have any questions/concerns. Thanks!

Thanks, that’s how I thought it was working. This means that the higher my screen resolution then the greater the differences in the scaling. That also means that using FullHD (1920x1080) I am more likely to get the problem I reported in this post. A screen at HD (1366x768 or similar), which is the most common resolution at the moment, will be much less likely to have that issue.

These examples are a good primer for new users, too.