We just released a GlassWire Android update with new dark themes. Check it out and give us your feedback. Thanks!

Get GlassWire for Android here. 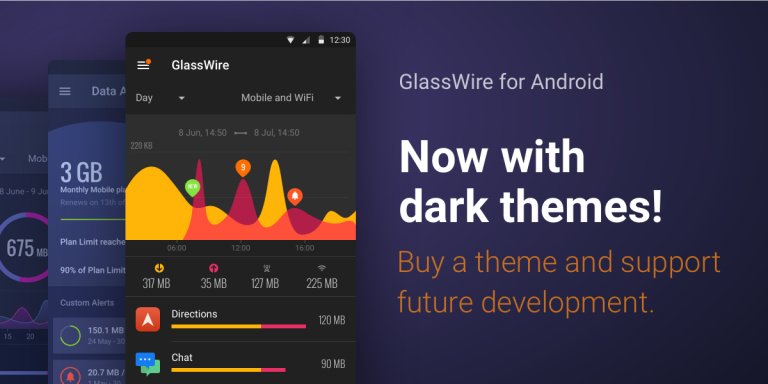 Will this theme be brought to PC? If it is already on how do I get it?

Due to the way GlassWire for Windows works it doesn’t really allow us to change the interface very much, but we hope to add a full dark theme there in the future.

Love the Dark Themes on the Android App. Thank you again for being very responsive to the suggestions on that platform. I think I suggested adding the zero-rated apps right after this application launched. And to be honest with you, I think you guys have developed the best data tracking application for the Android and Desktop platforms. My question: Would it be possible to create a dark theme for the desktop app or are there plans for that? It would be greatly appreciated.

I just bought the Night Neon theme on Android and man, it’s so beautiful. Please “port” it to the desktop version.

Thanks for your support! We hope to add a dark theme on the desktop. Unfortunately it’s way more complicated that mobile (or we would have done it already), but we will do it sometime in the future and it’s a very popular request!

I see. GlassWire for Windows is a beautiful app, but all that white literally melts my eyes if I open it at night

If we just made the graph dark, and the background behind “usage” stats dark would it solve it? The rest of the app would still be grey.

If yes, it would most definitely be a good start, at least until you guys figure out how to change the skin for the whole app.