App info should be available where the app is referenced

In Usage view looking at Apps there are occasionally duplicated App names. At present I have to return to the All view to check what the difference is between the duplicated names. I’d like the same application info to be available wherever the application name appears.

In this example below, the executable images for Avira Product Updater are in different folders: 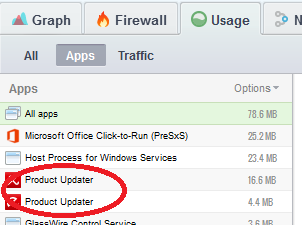 I had to return to the All view to see this:

I’m almost certain that someone else must have asked for this but I couldn’t find a relevant topic.

Thanks for your feedback. I haven’t seen this much myself on my PC. I wonder why they have two product updaters like that? I guess we could put a + next to apps with the same name over and over, but then it might make it easier for malware to hide in our “apps” list.

Yes, it is strange that different app versions are shown as different apps. It is not some big problem, but after 1 year of usage, there will be great number of apps listed.

App sort is needed in the Usage and Alert views

I imagine that there are other programs using this update method but apparently not many of them also have network access. It is a pain that I cannot sort the App usage view or alerts to show applications in name sequence to make it easy to see duplicated or similar names. In the previous example they were together, here they are spaced apart. It is possible that I couldn’t see them both on the same screen: 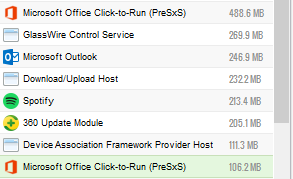 Microsoft Office is similar but appears to create a folder for the new version
version 16.0.7167.1332 = c:\program files\common files\microsoft shared\clicktorun\officec2rclient.exe

For anyone looking at the application files: long file pathnames are not displayed completely and it is not obvious how to copy the file path. You can’t in the Usage view. Instead you have to use the Alerts view then right-click on the program icon and right-click on the “Path” string in the pop-up info window to get the “Copy” option.