I’m using GlassWire 1.2.88 on Windows 10 and the AppInfo Versions from all Windows 10 Components are displayed as 6.2.xxxx instead of 10.0.xxxx. For example the Remote Desktop Connection Exe: 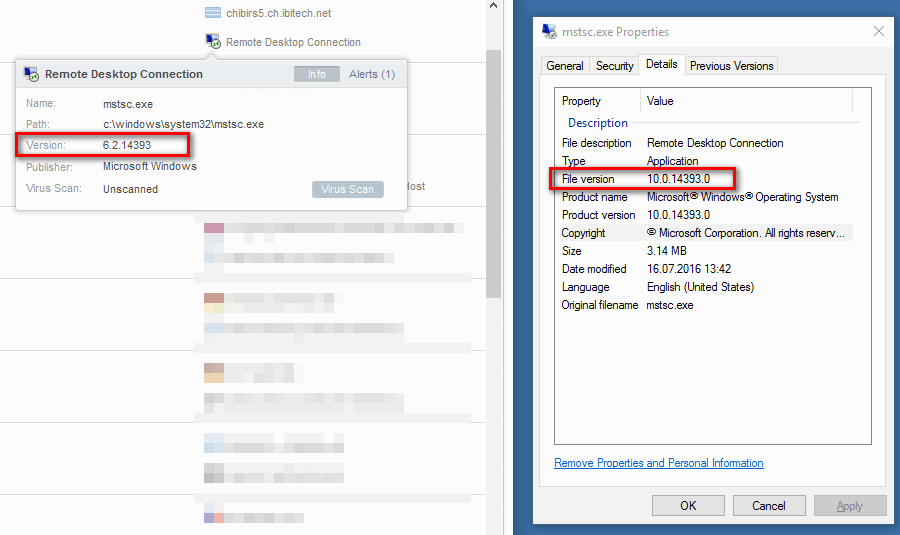 If you don’t mind losing your history, could you uninstall GlassWire, reboot, then reinstall our latest version a second time with the “clean” install option, then see if this problem continues?

Do you use any third party virtualization software that could cause GlassWire to pick up other software versions on your PC?

I haven’t seen this before so that’s why I suggested a clean install.

thank you for your fast answer

I don’t use any third party virtualization and unforunately I already tried a clean install with the same effect.

I have seen this behavior on other computers and with other applications when they are are not explicit targeted to Windows 10 and use specific APIs like GetVersionEx
https://msdn.microsoft.com/en-us/library/windows/desktop/dn481241(v=vs.85).aspx

Do you provide an .manifest for GlassWire.exe?

I will report this to the team and see if we can find out why this is happening for you. Is there anything else unusual about your system?

We have no .manifest currently.

I updated it from Windows 8.1 and it is a preinstalled Windows from the pc manufactor HP. I once had to dig into the mentioned situation (GetVersionEx for “old” applications) when we had problems with our own applications. But I don’t remember me making any registry-hacks or system changes at my pc for research.

Thank you for reporting the problem to the team

Did you get any feedback from the team?

Let me ask again. Sorry, we are behind on some stuff due to the Holidays.

I just discussed this with the team.

As we can see it looks like you checked a PC with the remote desktop application. Is it possible that you did not use the RDP for some time and Windows installed some updates during this time? Please let us know.

Thank you for your answer.

I’m working at a normal PC in the office. Sometimes, when I work from home or in a meeting room, I connect via RDP to my desktop PC. I typically use hibernate and don’t shut down my PC. So from this perspective it could have happened in the past that windows installed an update while I was not working at the computer.
But I don’t really see this as a possible reason, because every time when I saw a wrong exe-version message from glasswire I checked it with the properties dialog from windows which reports the right version number.
To me, it seems that glasswire is running as a windows 10 compatible app, so windows doesn’t tell glasswire the right versionnumbers.
Here a screenshot from my taskmanger:

If you check the remote PC in person with GlassWire does it show the correct version numbers, or no? We don’t use RDP a lot with testing so we thought maybe it has something to do with this.

We cannot recreate this on any of our PCs but I can ask our quality assurance person to test carefully with our next update and see if they can make this happen for them so we can fix it.

I normally don’t use RDP to connect to my computer. The day before yesterday I was sitting in front of my computer and installed Windows Updates and got the following glasswire messages: 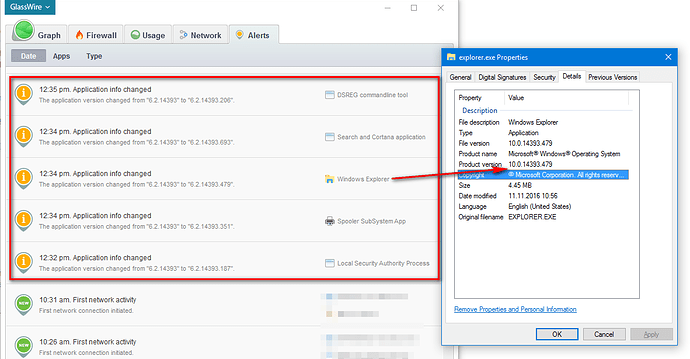