when store apps get updated they create a new version in a different directory…
e.g the paths obviously change so i can understand why glasswire sees it as a new version/executable.
its a bit of a mess over time, for every store app ive allowed or blocked, i can have many different entries.
is there any plans in future for this to be better managed? is there anyway that glasswire in future could manage this better?

e.g for photos app, when it updates, the paths change (but the app is the same store app)
c:\program files\windowsapps\microsoft.windows.photos_2019.19051.16210.0_x64__8wekyb3d8bbwe\microsoft.photos.exe

Ah ok thanks … noticed the suggestion to uninstall/reinstall and clear settings, ill give that a go as i still have the blockMSav.A!reg issues related to glasswire, is an old instal thats been upgraded over the years…
just removed it now and got the AV pop up again 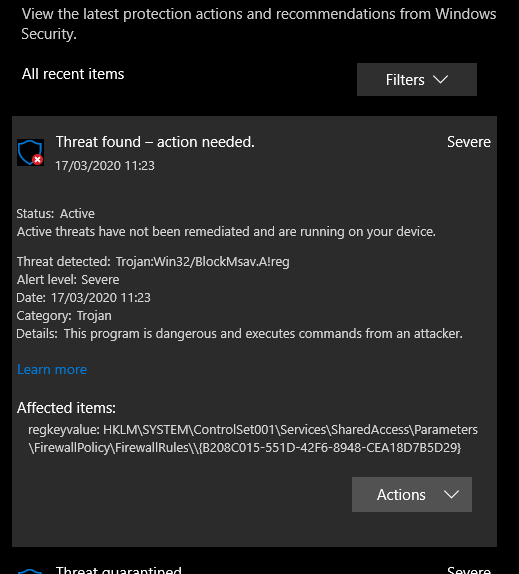 thanks for the heads up! p.s if you dont use photos at all, you could uninstall it using powershell
[Run] powershell -command “Get-AppxPackage Microsoft.Windows.Photos | Remove-AppxPackage”

ok have removed/reset win firewall, reinstalled, reconfigured.
Will see how it goes over the next few weeks

e.g for photos app, when it updates, the paths change (but the app is the same store app)
c:\program files\windowsapps\microsoft.windows.photos_2019.19051.16210.0_x64__8wekyb3d8bbwe\microsoft.photos.exe

can you run both versions at the same time?

Hi, i only have one photos app, but glasswire would create a new rule for each version and keep the old one in its list.

Hopefully after doing this reset should resolve the issue.
thanks

its a bit of a mess over time, for every store app ive allowed or blocked, i can have many different entries.

It should not be. Apps that don’t access the network for a certain amount of time automatically move to our “inactive apps” area in the firewall.

If you are unhappy with an app that’s listed you can mouse over the app name you want to remove and a small grey x will appear, then click it to make it disappear.

I realise i can mouse over and remove anything manually, but when they are all called the same thing at first glance its hard to know which (you have to click on info and find the version)
I was looking for some way for glasswire to better manage store apps and their multiple entries etc…

however you have already stated in this thread - Multiple Selection on Firewall tab that the multiple entries of store apps is an old bug.
I have today clean installed Glasswire so i shouldn’t see it happen again.

Wow, to be honest I never realized blocked apps didn’t move to “inactive”. We’ll see if we can improve this, thanks for your feedback.

ok here we go again… so reinstalled a few days ago, now it seems that Windows defender had updated, and now i have a duplicate “Microsoft Network realtime Inspection service”

the new one which was waiting for me to press allow
c:\programdata\microsoft\windows defender\platform\4.18.2001.10-0\nissrv.exe

so again, yes I can understand that glasswire sees it as a new app… but could we maybe have some way of always allowing certain processes/store apps or some better way to manage this?

so i have 2 duplicate entries now… if i remove one of them (the older 4.18.2003.6-0\ version) it actually must remove both, as a few minutes later i get a pop up asking for the permission again