Can I use Glasswire to watch whole home network traffic via a mirrored port on my first "root" switch?

Recently my home’s Internet usage jumped from a relatively constant ~600G/month to ~1.5T/month, equivalent of 8hrs of 4K streaming every day, from September bill to October bill. Xfinity’s claim agrees with my router’s usage counter, so the problem is not on the street; something in the house is using all that.

Sadly, Netgear Orbi RBR50v2 does NOT count by device usage. And, since Orbi is stiing behind the Xfinity cable modem, the cable modem is in the bridged mode, which disables any of the xFi functionality for such snooping, either via the xFi app or by their tech support. I could try to install Glasswire on all computers, but that will still leave out things like Smart TVs, tablets, phones, watches, connected A/V equipment, etc., right?

So, I was hoping to do the following. Please someone tell me if this would work or not.

Current setup: Xfinity xFi cable modem in bridge mode feeds into Netgear Orbi RBR50v2 router’s WAN input. The router’s LAN output goes out to a Netgear GS108Tv3 managed switch’s Port #1. Few outputs of that switch, with plenty ports left unused, feed a few devices close by, including a Windows10 PC with just one LAN card, as well as a Netgear 24-port unmanaged switch, which then spreads the wired network around the house through the walls & switches to different rooms and devices. Additionally, there are four Netgear Orbi RBS50v2 satellites for mesh networking; currently they are in wireless uplink mode, but can easily be plugged in to be wired uplink.

I was hoping that I could turn on port mirroring on that Netgear GS108Tv3 managed switch’s Port #1 to mirror all in & out traffic onto Port #2, then connect that port into the LAN input of the PC, which would effectively take that PC out of the home network, which I would remedy by using a USB/LAN dongle I already have and telling Windows to use that to connect to the home network. I am hoping that wired uplinks in all satellites would force wireless device traffic onto the wire, and mirroring all traffic (minus the Wifi traffic hitting the router directly, which I might avoid by turning off Wifi on the router and forcing devices to connect to the satellites) coming in & out of the router via the mirroring of Port #1, I would be able to have Glasswire on that PC watching the LAN card.

Is that even something Glasswire can do? Or, would I need to use something like Wireshark, which scares me given the hardcore UI. Is the hardware config described above even good for Wireshark? Or, PRTG? Am I even in the ballpark of a good approach of figuring out what is using up all those Gigs in the house?

Thanks for any advice!

I could try to install Glasswire on all computers, but that will still leave out things like Smart TVs, tablets, phones, watches, connected A/V equipment, etc., right?

The problem with full network monitoring is that once you determine the device using all the data (which is usually a PC anyway) there isn’t anything you can do to solve the issue unless you run something like GlassWire to see what apps are responsible for the all the data. Then GlassWire can block the app, or you can just uninstall it.

Our software doesn’t monitor the entire network, but you can use GlassWire to see all the devices on your network and get alerted when a new device joins.

You can also use our remote monitoring feature https://www.glasswire.com/userguide/#Remote_Monitoring to monitor multiple PCs from one GlassWire client. You can see an example of how that looks below. 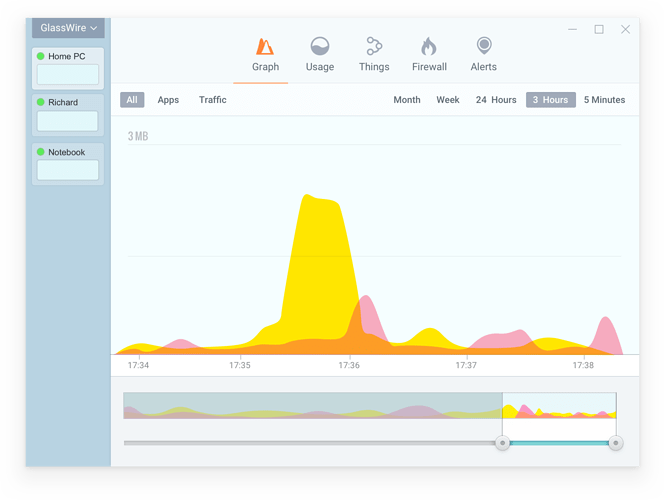 But this requires you to assign IPs to the devices on your network right? In the screenshot you have device names but they are really like descriptions?

Usually your router will assign IP addresses automatically I think unless I am not understanding what you are saying.

You can name the devices whatever you want when setting this up. That way you know what each PC is that you’re monitoring.

Sorry for the delay in follow-up. Life happens…

Thanks for using GlassWire.

The lock feature just locks down others from changing your security settings. It uses your Windows admin password so a person cannot get on your PC and change all your settings without your permission. If this is not needed for you then you can turn this feature off instantly in GlassWire’s settings. Just go to our top left menu and choose “settings”. 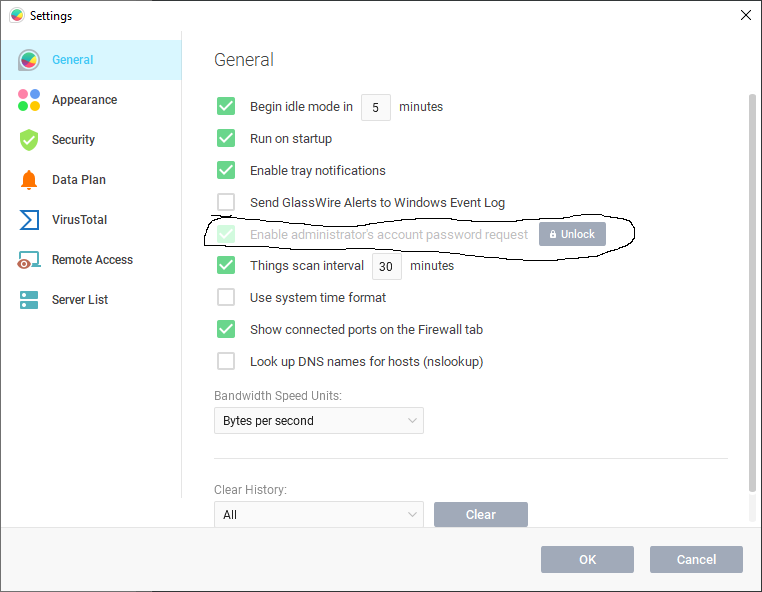 We associate the names of devices with the Mac address, not the IP. You may notice some Apple devices may keep changing. You can turn this off with each Apple device if this is an issue for you. https://support.apple.com/en-us/HT211227

If you want each GlassWire client to be exactly the same for many different PCs and you want to use our label system, then yes you’d have to add labels on each PC you plan to use. Or you could just use our remote monitoring feature and connect to your other PCs on the network, but mainly monitor them from one main PC.

Our remote monitoring system looks like the image below. You can then click on the other PC names like “Richard” in the example and see GlassWire’s details there for that other remote machine instead of having to visit each PC separately in person. 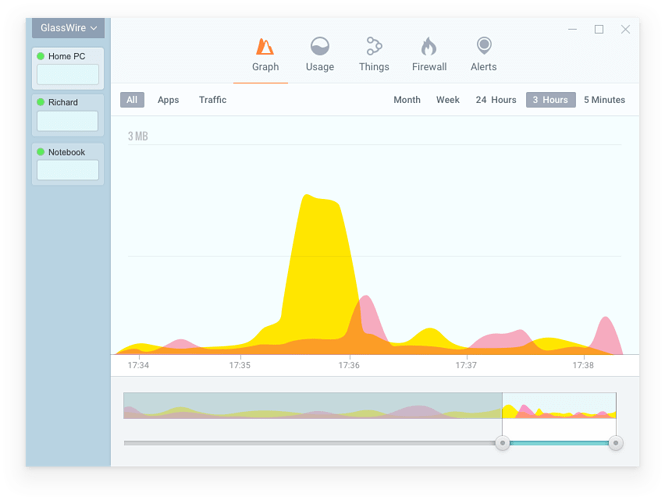 Thank you for the response. Good news on the MAC usage for labels. Yes, iOS14 introduced the randomized MAC address, but I turned that off on my iOS devices.

I have installed GW on all my 9 hosts, 1+8, and am remote monitoring 8 of them from the 1, but here are a few of the issues:

Thanks for any further guidance, or future feature implementation.