Happens with several apps.
A couple of snaps from top of list… 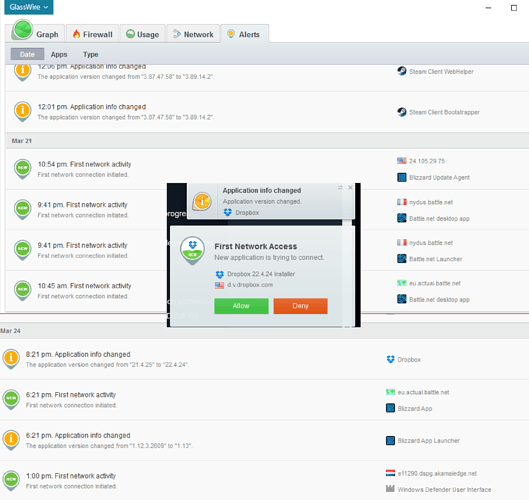 In addition, once you have denied an app, it keeps asking. ARGH!

Do you use any other software that could be conflicting with the Windows Firewall API? I recommend the following:

Now turn on Ask to connect mode again and see if it solves the problem. I see with Battle.net there is a separate launcher and a desktop app, so you should get separate requests for those two but with Dropbox that should not happen.

Deleted ALL Glasswire things in Windows FW, Deleted glasswire, Installed with CLEAN option. NO IMPROVEMENT!
I have newer had a similar problem in any firewall. Not even Windows extremely lacking Firewall does this!

The version change alert, that one is working. But having to ALLOW the same app time after time just because a damned update. Stupid! *Have a look in the Firewall, when ever will it be fixed? for screenshots!

I looked at your screenshot. I use Dropbox and it never asks me to connect again in “Ask to connect” mode.

Could you uninstall GlassWire again, then go to the Windows Firewall control panel and choose “restore defaults” then choose a “clean” install option with GlassWire?

The same issue has happened to me with the Microsoft Outlook Communications program. Glasswire asks my permission to allow the program every few days. Everything else seems to work fine.

I saw in your other post you are using another firewall tool, so perhaps you should uninstall GlassWire and “restore defaults” with the Windows Firewall, then do a clean install of GlassWire.

I had been using another tool, not alongside Glasswire. I also had the same problem with that tool, for more that one apps if I remember correctly. Before installing Glasswire I had uninstalled the other program, reset the Windows Firewall to its default state and restarted the system. Could it be that the same app tries to connect using a different port (that was not requested before)?

I don’t think so. Our team uses Outlook and has never had a problem.

I have also been having the same issue for… ever. 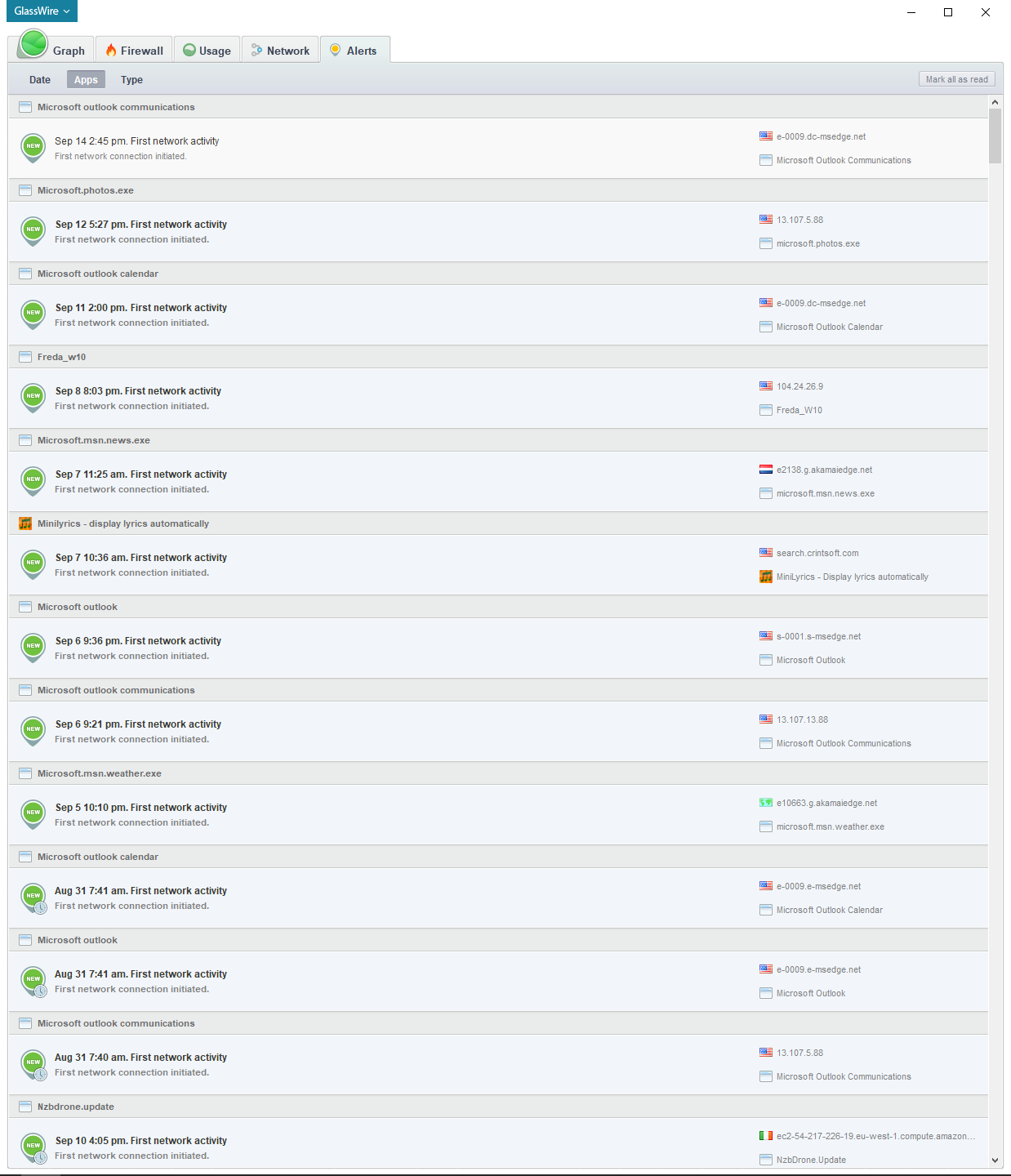 Thanks for your feedback. We hope to improve this in the future.

This has been happening since the start of glasswire

It happens on apps where they move location or add a prefix/suffix to the file name.

Blizzard as example have multiple folders with
Battle.net-965
Every update this file gets moved to achieve and new file put into the main live folder
Battlenet

@punkle @laurel @tzonTP @smogsy Browsing the threads, it seems like the issue is similar and more widespread than we believe. Two of us (me and @JHefile) have started similar threads here and here.

Could it be possible that we all get together in a single thread under a common title so that it is easy for both the Glasswire guys and us to monitor and keep track of?

It is happening for several apps! and not just game like apps.

I was able to recreate this bug due to rebooting. It seems the problem doesn’t appear until after a reboot, unless I’m misunderstanding something. Perhaps this is why some people never see this?

@god Do you reboot often?

Do you reboot often?

Yes, all the computers that I use are desktops and they are always shut down for the night and rebooted in the morning. Your conjecture about rebooting is correct.

In fact, It did not occur to me that most people might not be rebooting at all. My bad there. It did not even occur to me to mention that I was rebooting. I took it for granted that it was understood.

I hope that everyone has been facing the issue because of reboots. If so, it will be a huge relief for everyone involved.

I reboot, but I usually work on a desktop so I don’t reboot frequently. I’m sorry we missed this bug.

I’m sorry we missed this bug.

I thought all of us made sure you didn’t!

Hi there, any updates on resolving this bug? It’s been a while.

Can you be more specific with what problem you are having? This problem mentioned in this thread was fixed months ago.

If you are still experiencing a problem due to a bug with a previous version of GlassWire please uninstall GlassWire, reboot, go to your Windows Firewall Control panel and choose “restore defaults”, then reinstall our latest software with the “clean” install option along with the “reset firewall” option.

I was hoping not to reinstall because I have soooo many apps blocked from making outbound connections, and a whole bunch of network devices named in the “Things” list, so not really looking forward to going through all that again.