Glasswire does not see WSL Linux subsystem for Windows 11 traffic

So, I’m using Kali Linux on a Windows 11 host with the WSL Linux subsystem. I’m interested in using Glasswire to monitor all my traffic, including the traffic coming from/to the Linux subsystem. However, this traffic is not detected by Glasswire.

Below is an example: 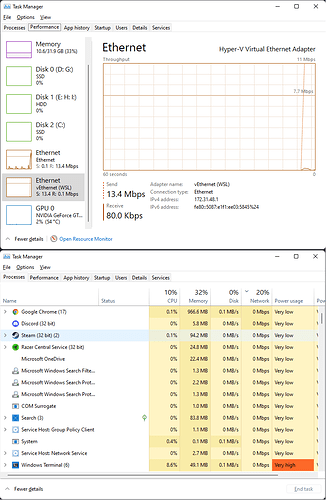 If I go to processes and sort by network usage, I don’t see any Windows process using the network, although network usage is listed at 20%.

I’m assuming that there is some underlying Windows WSL magic going on that makes this traffic undetected. If I can’t see it in Task Manager, I don’t imagine I would see it in Glasswire. However, it would be interesting to see what insights the dev team has to bring to this.

However, it would be interesting to see what insights the dev team has to bring to this.

If GlassWire isn’t newly installed then perhaps the API we use that’s provided by Windows to detect all traffic is purposely made by Microsoft to ignore the Linux Subsystem?

I will ask someone on our team who uses the Linux subsystem to see if they can recreate this or not.

I restarted already, it makes no difference. It must be due to the Windows API.