Glasswire Firewall not blocking anything when NordVPN app is active

Installed and configurated, since I had already used in another computer as trial.

On my Firewall tab the Firewall is ON and Ask To Connect is selected.

Every program that makes a new connection, can acces the internet. Even if it shows “Unblock App” on the little Info window.

And more, if I manually set the flame to on (Block app) on Chrome, or Brave, or Steam, or CCleaner, or NVidia Container, even with the flame on (blocked on firewall) I go to these apps, and they’re plenty connected to internet.

So there is no point of having bought it.
A firewall that does not work as firewall.
I’m very disappointed and feeling that I’ve just throwed money away. ]I’m from Brasil, and here USD are very expensive.

Anyway, thanks for the patience and time spent reading untill here.

Sorry for the issue. Let me help you solve the problem.

We use a Windows API for blocking and it should block during boot up even when GlassWire is not running, and even if GlassWire is completely killed.

Do you have any other firewall software installed? If so perhaps it is interfering with our own rules. Could you uninstall it?

Now install our latest version with “clean install” and “reset firewall” both checked.

If your blocking is still not working please let me know what other security applications you have running on your PC, and what Windows version you have. Thanks.

Ok Ken, i’ve just did everything you suggested.

I was really thinking it would solve my problem.
Now I’m replying to you from a “Blocked on Glasswire” Google Chrome.
All other apps that I’ve just blocked also are connecting to internet.
I’m using Avira PRO Antivirus, and I have Malwarebytes Free installed but not running.
Also I use NordVPN. I use it via NordVPN application for windows, connecting through NordLynx protocol.

If you exit Nord completely does the issue go away?

I found this message about this issue on Reddit.

When I exit NordVPN app the Glasswire Firewall start blocking everything as it should. Its a relief to know what the issue is related to.
But anyway, I’ve bought Glasswire to use under NordVPN, because I route my traffic under Nord 100% of the time.
Now I guess you will probably tell me thats an issue that is not related with Glasswire, and may I search for my solution alone, right?

Anyway, thanks for your kindly attention and help…
The problem persists here…

There is an easy solution.

Nord offers the ability to use the built in Windows OS VPN software instead of theirs. Switch to your Windows VPN software and the issue is instantly solved.

Judging from the Reddit post I would guess Nord is getting complaints about bypassing the user Firewall, so hopefully they will make changes to their software in the future.

well Ken. after spending 8:30 hours of my day making glasswire firewall rules effective block programs under NordVPN connected via ‘manual connection’ witch is a nightmare, because its ikev2 and not nordlynx, I found out that with glasswire on its impossible to set a killswitch even in Windows Firewall…
i’m close to despair, I feel like completely wasted money. even more knowing that simple tools like SimpleWall or even the payed NetLimiter would solve the problem of blocking applications without all this hassle.

I’ve always followed this tutorial in order to create a killswitch to windows10 VPN, just for you to know. 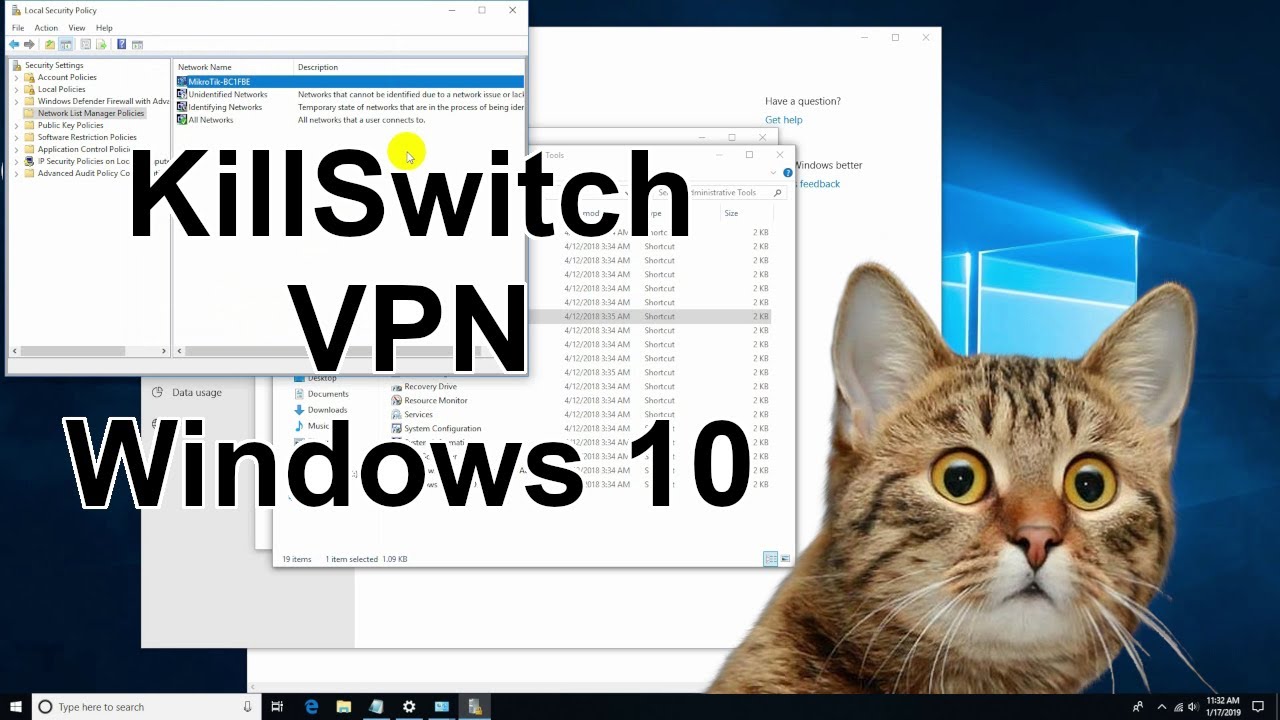 I’m trying this one also with no success…

How To Setup A Windows 10 Application Network Killswitch

A more appropriate title for this could be: How to setup Windows 10 firewall rules to kill network traffic to an application when it disconnects from your VPN connection, for whatever reason.If you’re concerned with privacy and you’re using a VPN...

I am very sorry for the issue. GlassWire does not interact with VPNs or make kill switches for VPNs. We do not make VPN software or services.

I’ve always followed this tutorial in order to create a killswitch to windows10 VPN, just for you to know.

this may be the real solution for this situation.
it works perfectly while not installing glasswire.
unfortunately, immediately after installing glasswire, it stops working. reseting or not Windows Firewall policies.
if some support technician could help me to tweak this tutorial to use together with glasswire, all the time lost trying to solve it would be worth.

I am unfamiliar with the tutorial, but I’d probably uninstall GlassWire in add/remove programs.

Go to the Windows Firewall and choose “restore defaults”.

Now try to set up the kill switch and see if it works. If it doesn’t, then it’s not related to GlassWire.

If it does work then reinstall GlassWire, then see if it’s still working.

Thank you for troubleshooting with me Ken!

Then when I install Glasswire, with clean install, without reseting WF configurations, the Killswitch just stops working.
The probably one modification that I see on Windows Firewall, is that when I install Glasswire, it changes the “Profiles” section, blocking the Public Profile Outbound Connections.
And even if I change it back to allow Public Profile Outbound Connections, the killswitch doesn’t work anymore.

The Public Profile Outbound Connections is the only outbound connection that should be allowed in order to this killswitch works.
Would you bother too much of trying to follow the steps of this tutorial and reproduce the error on your computer? It dont takes more than 5 minutes if you speed up the video.

Again, thanks for troubleshooting with me.

One question. When you reinstalled GlassWire did it still have all your settings/history? I wonder if you would have checked “reset firewall” and “clean install” on GlassWire if it would have worked.

I use GlassWire with PIA and it works great.

I dont believe someone still uses Nord after they were hacked…

NordVPN confirms it was hacked – TechCrunch

NordVPN, a virtual private network provider that promises to “protect your privacy online,” has confirmed it was hacked. The admission comes following rumors that the company had been breached. It first emerged that NordVPN had an expired internal...

also I dont believe Nord would disable firewall rules but it just proves they dont care about security.

Only set “clean install”, Ken, because if I check “reset firewall” another time, it will reset the killswitch that I just made, after resetting the WF after uninstalling Glasswire.
get it?

@DaNoid thank you for the contribution. yes, it is a shame that NordVPN app mess with Windows Firewall rules. but unfortunately the service is already paid and I still have 2 years of subscription. so I must adapt to the situation.

I’ve just find out that the Glasswire firewall dont allow me to setup WF profiles. It overwrites when turned on, and don’t come to previously set settings when turned off.

is there a way to preserve this settings on Windows Firewall with Galsswire Firewall on?

I was unable to use the method you posted with the network kill switch unless you have GlassWire’s firewall switched to off, and keep it that way. Many people use GlassWire purely as a network security monitor and if you choose to do that then we won’t touch the Windows Firewall API.

Perhaps Nord will consider making changes in the future that will allow Windows users to use their own firewall software instead of making that impossible. I have read on Reddit and other websites that many other Windows users are upset about this behavior and I think Nord is the only VPN provider that does this.