some jerk in my community found out someone HE didnt like was piggybacking on MY router… that was bad enough, but this errant genius decided to hack MY router and reset all the settings, everything, back to factory defaults to ‘get back’ at whoever it was he didn’t like. I killed several virus and even had to reinstall my os once to clean my machine up. I have not been able to use my router since I have not the expertise to keep this jerk out… how can I catch him and id his machine, hopefully with Glasswire, this being the main reason I purchased it. Glasswire reports 86 ‘devices’ connected to my machine now, at the ethernet port… and I can’t decipher if they belong there or not… are these actual devices, functioning hardware somewhere, many are not brand names I use… and they go back, dates wise, to last year sometime, is that normal? Is there a way to delete things I KNOW are bogus from the things I need to worry about? Thanks in advance for those willing to be generous enough to share their knowledge and know how with a retired old guy that just does’t soak up the details as well as he did in a younger day. This is NOT about someone ON my network that BELONGS on my network, this is about hijacking my router and screwing up my internet. Also about getting specific information on ‘devices’ , what they are, and are not, and how to understand the scan results.

89 devices sounds like a lot. The most efficient way to solve this problem would be to reset your router to the defaults, then look up a guide online on securing that specific type of router. You can then set strong passwords for your WiFi network (and for the router itself) and the router should hopefully stay secure.

If the router you have cannot be secured it’s probably worth it to buy a more modern router.

You can go through the list of devices GlassWire lists under your “Network” tab. If you don’t see those things in your home then perhaps other people are using your WiFi and you should shut down your router and secure it.

I AM on a wide area lan system, beamspeed.com, and all these keep showing up as devices on MY system, and I forgot to mention that I already reset glasswire to defaults and don’t even have a router attached right now, so what the hell are all these other ‘devices’ that are not on my system beamspeed is the only one I recognize
great, Glasswire has no way for me to copy and sent the text and no way apparently for me to send screencaps… definitely a useless non feature. OK, just found the image upload, my bad.and this is not even the complete list 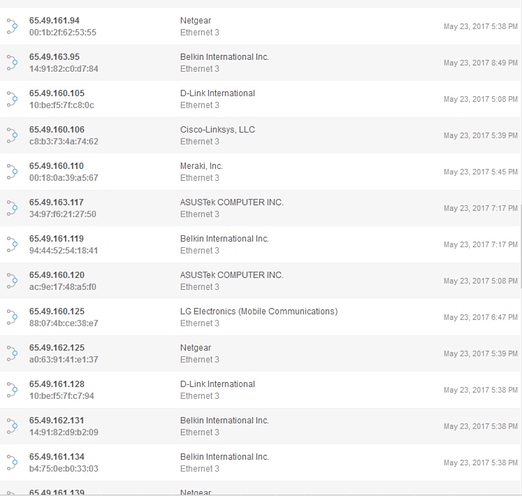 sorry, I got screwed by the one image limit… thanks for that, well worth paying for…

I have also faced the same issue some time ago. But my friend has suggested me to contact with Belkin router support for the solution, then I have contacted to Belkin router for help and yes they have suggested me the right method for this issue. They also have fixed my Belkin n300 blinking orange light issue.

I’m guessing that your ISP has you on a network that allows you to interact with other customers and their devices. So, the list is probably all the other customers near you on the ISP.

I can promise you the list is not made out of thin air. GlassWire is able to detect and scan these hosts, so it’s likely these devices can also see you.

I AM on a wide area lan system, beamspeed.com , … and don’t even have a router attached right now

Install a router instead of connecting directly to the wireless modem. That way the only devices you will see on your LAN will be yours. The router will provide additional security for your device(s) because it will make your network private rather than public as it is now.

It looks like you would originally have had a router. You’re on “Ethernet 3” which suggests this is your third configuration of your Windows network connection. Also, you can see from the listed devices that they are all routers so it is unusual that you’re the only one without a router:

Well, must be getting old, now Im confused. Unless the router is the Beamspeed modem itself, that connected directly to my laptop with a cat5 cable.
Apparently if I wanted wireless I had to also go though a router that had wireless built in.
Well thanks for the advice, much of which I did not comprehend, but now I went to a Verizon JetPack, a wireless hotspot and even though I am told that my band width at 3g is only 630 kbps or such, and Beamspeed advertised (and I paid for many years for) 756 kbps… with the Hotspot I am getting much superior content downloaded much faster than Beamspeed ever did.
I simply regret the years I wasted on inferior service with many promised bandwidth increases that never happened. Oh well. Now I do pay a bit more, however I get what I paid for.

You’re now connecting to a different type of network with a different modem so you shouldn’t have the problem you reported here.

The following is for your information, if you are interested.

I’ll explain again in other words to also make it clearer for anyone else who reads this.

One important advantage of a router is that it acts as a firewall to prevent other subscribers from seeing any of the computers attached to the router. This security benefit is important enough that I would always recommend that subscribers use a router even with only one computer.

The bandwidth figures you are promised are normally delivered on a best effort basis. Your contract should specify the exact details.

The bandwidth you get depends upon several factors including these: