Is it just me, or does this application start operating on it's own whims?

I love the application and the options it provides. However I have noticed this for a few months now.

(Pro version) I have my firewall set to ask to connect…

After the initial computer restart (or perhaps when the main window is open) I don’t always get a prompt for a new application to connect.

Applications still have internet access when no prompt is provided and the glasswire automatically sets it to block.

Some applications I have explicitly told to block I still get first network activity notifications later down the road.

With all this information, it’s getting really hard to know what the application is really doing, and if it’s actually protecting my system of just a glorified notification system.

Any input on these things would be of great help.

Thanks for using GlassWire!

Issue 1 - We use the Windows Firewall API. If you are in “Ask to connect” and the application tries to connect during startup then GlassWire will automatically block the app and you may not get a prompt in some cases. This is one advantage of the Windows Firewall API because GlassWire itself does not have to start to block something and you should never have an app get through and connect even when GlassWire itself is not running.

We don’t see this issue mentioned often but perhaps we can consider an alert in the future that says something like “X App attempted to connect on startup”.

Issue 2 - If I understand correctly I think it must be due to the app trying to connect on startup as above. Please let me know if I misunderstood.

Issue 3 - Please give more details and we can investigate and try to recreate the issue. The Windows Firewall API is used by a billion Windows users and we have found it’s reliable at blocking apps. Many IT and Infosec pros use the Windows Firewall rules to block and we find it works well.

I think this mainly applies to items that have been automatically blocked. For example I use a VPN service that runs on OpenVPN and makes use of an OpenVPN Daemon that was blocked but the service still operated. The same thing goes with an application called GitKraken. It was blocked automatically but I was still able to connect to github and commit changes.

This I noticed today from a Windows native application… yourphone.exe.
This was blocked via pop-up the first time it showed up 3 day ago. Today I got a notification of first network activity from that same application. after launch the UI it showed that it was being blocked by the firewall. 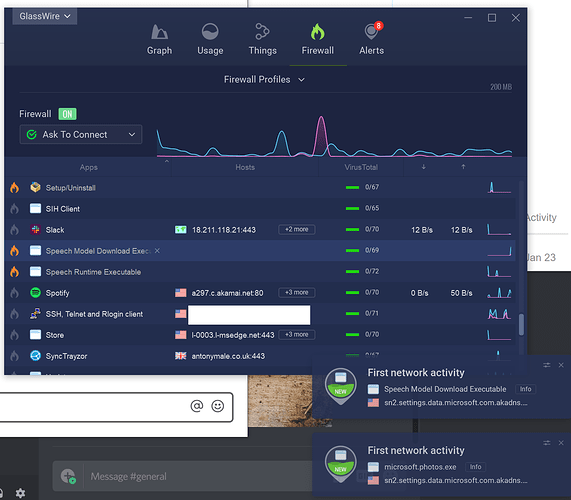 This is an example of Issue 3. This exact app was blocked then at a different time got notified of network activity.

Thanks for these details. I will share them with our quality assurance team so they can investigate.

This windows 10 install is only 4 days old.