ISP vs Glasswire Usage not correct

I am including a screenshot (hopefully if I figure out how) that shows a side by side of my ISP usage report as of a few minutes ago and to the right is the Glasswire Usage showing from April 3rd to present (The 3rd of each month is considered the first day of my new billing month which I also wish Glasswire could be programmed to figure out. The Data Limit alerts are useless to me due to this sadly as they include data from the 1st and 2nd which count towards the previous month for me so Glasswire constantly is giving false alerts of going over the limit.)

Before I continue the ISP usage amount includes data from this PC, a laptop, 3 cell phones, 2 Kindle e-readers and an older outdated gaming console. Obviously the Glasswire usage is showing from this PC I’m at now which does tend to use the most data each month outside of possible game downloads on the game console very rarely. Glasswire is installed on the laptop as well to monitor there as well as 1 of the cell phones.

As you can see the usage is not accurate even considering the other devices that are adding to the total usage meter on the left (my ISP usage report). This time it is not a large gap currently however I still have to go through to midnight of the 2nd before my internet resets for the 3rd going into May. There have been months where I did not get a screenshot sadly where the usage for Glasswire was showing nearly 30GB more than my internet usage which is telling me Glasswire is clearly not recording the data correctly off and on at some point because if it was my internet would have been cut off for going over the limit those times.

I have seen similar topics over the last few years that never seem to get resolved either on this issue. Because the ISP usage data is so limiting as you can see I rely heavily on Glasswire to monitor usage at least on the two computers and the one phone. The other devices (minus the 2 cell phones) are easy enough to do a rough calculation with. As you may also see in my ISP usage I have a very strict limit of 60GB/month which makes Glasswire especially helpful to monitor very specific uses online to determine if they are safe activities to do or if they use too much bandwidth. However if Glasswire is claiming my usage is much higher than my ISP is seeing, it kind of makes it difficult to get an accurate idea.

Doing some rough estimates of usage the ISP usage is closer to being accurate than Glasswire is for sure this month. Will this ever be fixed? And will an accurate bandwidth limit feature be setup make use of the alerts? Not everybody has a plan that starts on the 1st of the month.

Sorry for the issue. Why do you feel our data isn’t accurate? Also, please consider we separate local and external traffic.

I should have also noted in the previous post that I am not a new user and have been using Glasswire for 4-5 years so this is not just some sudden random response to this. I have been noticing this for years as well as others during those years posting about the same similar issue on these forums. I know the data is not accurate as at least 1 time last year Glasswire on this PC alone claimed over 60GB of data had been used in less than 1 month time. If that were the case and it was accurate our internet would have been shut down. It’s not slowed, it’s shut off if the limit is reached. Our actual usage was only 40GB or so at the time so there was a large difference during that occasion. I did have screenshots at the time however I had some serious health issues start up so I never got around to reporting it then and I can’t seem to locate where the images went. Not only this but constantly with downloads (whether it’s a regular download or an OS/program update) I can clearly see the differences with the downloading. Glasswire nearly always records double the size of the file where the ISP usage only records the actual file size. I’m not digging through the Glasswire past reports to find it but an example was an 8GB update that Glasswire recorded as using 16GB. Glasswire always seems to record double the usage for any update or file download rather than the size. And yes, this is External traffic, not Local. (If you look at my previous screenshot you’ll see External listed at 21GB still for this computer alone (only 112MB for local usage) while my ISP usage that covers 2 computers along with the devices I mentioned before is still showing less usage). Again, I am not a new user and this has been ongoing since I started using Glasswire. Also again, the ISP usage shows all internet usage for all devices while Glasswire only covers the 1 device. The ISP usage for this month is accurate as far as my rough estimate of usage goes across 2 PCs, 3 Cell phones, 2 Kindles and the old game console where Glasswire for this PC alone is showing higher usage than all of that combined for some reason. This PC should only have 11-12GB of usage for this month so far, not 21GB like Glasswire is claiming.

As for Alerts, here’s another screenshot for you. As you can clearly see it is already set to the 3rd, yet it is still reporting the usage for the 1st and 2nd with the alerts. I have this computer’s alert set to half the usage and the laptop is set for half as well so it’s sort of divided among the two to warn us. I always get the alert stating the 75% usage and the 100% usage and when I look at the amounts it is indeed counting for the 1st and 2nd of the month still and not starting the count from the 3rd like it’s set. This has also been an ongoing issue for years which I reported at one point but I pretty much got the same response as you gave me and I have seen at least 1 other person report the issue on the forums over the years as well. 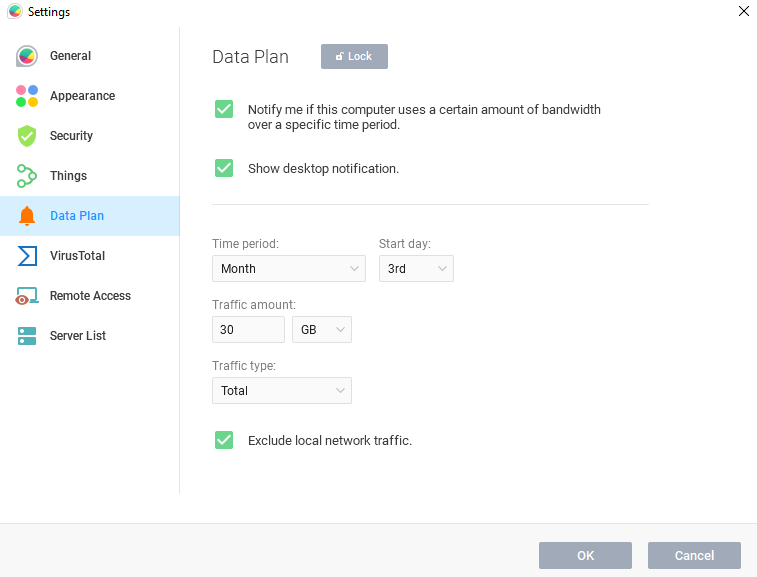 Thanks for your detailed feedback. We’ll review this with our team then try to recreate the issue and fix it.

Your welcome, and I apologize if I came off as a bit rude or anything. I’ve been very ill for the last 2 years with no improvement and I just keep getting more things piled on me to try and deal with and it starts to become too much

I use the program especially for the real time monitoring to prevent programs from running updates that I don’t want done yet depending on bandwidth usage and to track down what the problem program(s) are which it does work amazing for that! It’s just that count. Some month’s it’s close enough but other times it is incredibly off. I still can’t find my old screenshot of that really big one last time. I watch the usage very closely for obvious reasons and I’ll do another if I notice such a huge difference again. I don’t have exact data usage for the other devices at this time but my rough estimates so you can get an idea too are:

Those are what I know 100% for certain, they are rounded up slightly. 1 Kindle was never connected this month but the other was for a short time for a few new books. 1 Cell phone was used for some minor Facebook Messenger usage as well while the other 2 have not been connected yet this month at the house. From my ISP usage that means this PC alone should have used roughly 11-12GB of bandwidth but Glasswire shows 21GB which is nearly double that. It just really doesn’t add up.

Thanks again, especially if you can figure out those alerts. It’s frustrating to see that pop up in only the 2nd or 3rd week of the month long before our reset and I go to double check everything and it is indeed counting bandwidth still from the 1st and 2nd, despite being set for the rest being on the 3rd. That showing for only PC as well makes it concerning as I am the only one who uses this PC so I know exactly what’s going on with it and to see that alert pop up so early for the usage is always worrying and I have to double check that it is including information from the first 2 days of the month still which it always does. The 1st and 2nd our are highest usage days as we are just kind of wasting whatever extra we have before it resets since it does not roll over. I kept hoping an update would fix it but no luck yet. Hopefully someday soon?

So far I’m unable to recreate this issue, but we’ll keep working on it. Thanks for the details, and hopefully we can get to the bottom of the issue soon!

@atryeu Do you use some VPN or proxy?

@tnodir No I don’t use either and never have.

Do you mean the bandwidth recorded being off or the alerts being off? I was going to try and capture a screenshot again when it showed the limit hit but I started realizing how late in the month it is already so I looked back and sure enough the alert was already shown earlier in the month already so here’s the proof of the Alerts not popping up accurately to go along with my previous screenshot of the settings in the post from the other day: 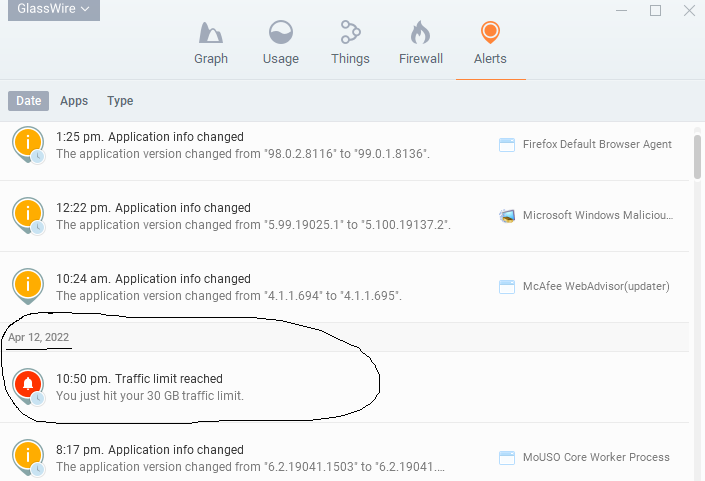 Note the circled area, April 12th at 10:50pm it claims the 30GB limit alert I set was reached in the above image…

… continued from previous post for the other image proof… 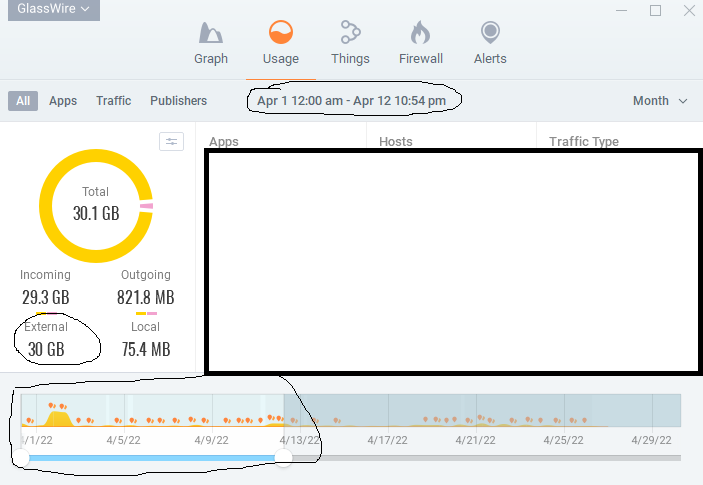 Second image note the circled dates set for the Month for April 1st 12am - April 12th 10:54pm (a few minutes after the alert) and the bottom meter set to those dates. 30GB of External data reached, and very clearly counting the 1st and 2nd days even though the previous screenshot the other day shows it should only be counted starting from the 3rd of each month to the end of the 2nd the following month. Again the first and 2nd days of the month are the heaviest uses to use as much of whatever we have left as it does not roll over so the limit alerts usually do pop up within days or so of the Windows updates going live towards the middle of the months somewhere.

Thanks for posting these details. I’ll share this with our team.