I’m on a 4G network that has different data limits for off peak usage (12AM to 6AM), so I try to do updates during this time. But then it gets aggregated into my total usage by Glasswire. I want to see it separately, and for it not to be included in the peak hours stats.

@Markus_Louw
Thanks for your feedback. We have had a handful of people request this but we’re not sure how to do it with our user interface so it’s reasonable to use. We will keep thinking about it.

Glasswire is a great app that I’ve been using to monitor my data usage. But the only feature it lacks is the capability to monitor the peak and off-peak usage.

I would like to suggest a UI capability similar to Data Plan option where we can specify peak and off-peak hours separately for mobile and WiFi data.

How does the user interface work for something like this? Could you post some screenshots? I am unfamiliar with peak hours and how it works.

So we have to carefully manage this bundle to avoid speed drops and additional data purchases. Therefore it is an important feature that is better to be implemented in a data monitoring app like GlassWire.

Frankly I am not a UI/UX Engineer. So I’m really sorry for the bad design. I just wanted to give you an idea that something similar to the following would work. 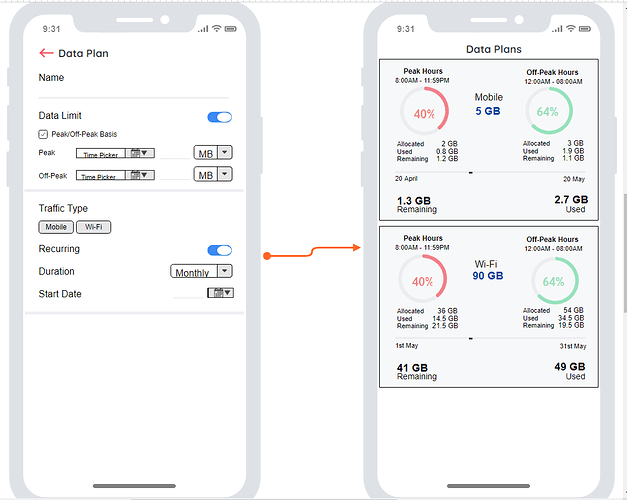 Since you have already introduced ‘Data Plan’ feature, a user can simply tick on ‘Peak/Off-Peak Basis’ checkbox if he/she is using a data connection which has these restrictions. Then only the additional fields (i.e. Peak and Off-Peak time range fields) are displayed to the user. So the user can simply define the Peak and Off-Peak time periods and allocated data limits. Otherwise the existing flow continues.

The same should apply to the Desktop application as well.

Nice mockup for a nice feature.

I’m in New Zealand and we have little need for such features unless on rural broadband. Our urban mobile and fixed broadband have unlimited plans available. The latest mobile throttling is to 1.25Mbps once we exceed 40GB of data. That’s fine for video streaming.