I noticed yesterday before i updated glasswire. The my Chrome browser was only at 100MB for the whole day here at work. Yet all day i was listing in on Twitch Streams (almost 6 hours).

I updated to the 1.1.41b version and restarted. Went the next 2 hours listing in on Twitch Streams and again chrome barley used much.

I went and looked, but didn’t see anything else that was high in network usage that would have accounted for all the missing twitch data. The next highest items were Syncthing and Dropbox, but they were both only at 85mb. Chrome doesn’t use adobe flash, but i did look for it in the apps for the day, but it was not listed.

Is there any other information that you might want to help trouble shoot? Cause i really don’t think the stream at 720p for 8 hours would = 100mb

Otherwise i have loved this program since i fire learned about it from Barnacules. I’ve even located a few other Windows 10 Telemetry process’s that i did know where there both.

Some of us here actually worked on a video streaming application in the past so you may be surprised how little bandwidth streaming uses, but we’ll this in detail and see what’s happening. Can you confirm exactly what technique you were using to Stream to Twitch? What OS version, what software, and what were you streaming? Did your stream have a lot of motion or was it mostly static?

I was not streaming, but watching twitch. I was using Chrome to listen/view the stream.

The stream i mostly watch during the does have a fair bit of movement from the game play.

Thanks. We’ll test on our end. If you want to tell us the Channel privately via email on our contact page that might help us also. I assume you were just viewing it the default resolution?

I was just watching on the default resolution. I will submit the contact page with the twitch link.

Usage page
no place to be found if it doing 250Kb/s then it should be over 1.1MB already but its not.

We tested this by watching Twitch with Chrome and other browsers and we were unable to recreate the problem. Perhaps the Twitch feed was in low resolution or didn’t have much movement. 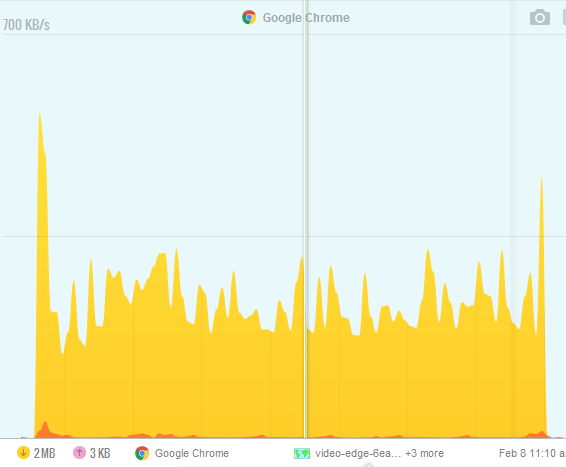 The issue I see is with the usage tab not the graph tab. The address in my example telegraph.twitch.com is not listed in USAGE list.

If twitch on my example is using 256kbs second it should be above 1mb usage when I select chrome. It is not that the issue I see here and that’s what the OP is stating the usage is not showing under chrome in the usage address list.

For us we see CDN traffic from a much longer URL when viewing Twitch streams. We don’t see telegraph.twitch.com.

ive re-tested this for the OP. i dont think this is a bug, but just slow Usage page updating.

Streaming at 384Kb/S according to GW it took up to 2Minutes to appear in > Usage > Chrome > Hosts.

Not a problem in my eyes. its already used 126MB here in under 5 Minutes so the OP problem is odd.