I have firewalled Microsoft Office Click to Run and yet it still shows usage. I have not firewalled LibreOffice at all but I doubt it is part of the problem. Ideas?

How much usage does it show? Is it possible that the usage was from before it was firewalled, or perhaps the app was updated and this is a different version of the same .exe?

Strange. Was your firewall ever set to “Off” at any point?

GlassWire will continue blocking even before it starts up on reboot, so that isn’t the issue.

Do you use any other firewall software? Perhaps the rules are conflicting?

It is strange, but let’s not worry about it. If any other program jumped the firewall, I would see its usage which is a good safety check on the GlassWire firewall. Yes, I do use the Windows Firewall and I made a couple of changes to it about a month ago. I don’t see any conflict, but maybe that is the problem. I like GlassWire.

I use Office myself and I have not seen this, but we’ll test and try to recreate this on our end. Thanks for your report about this issue.

The following info might be of interest regarding Microsoft Office 365’s Click to Run (CTR) service (officeclicktorun.exe) which updates Office 365 - Windows Update is no longer used for this purpose.

It might be a better idea to use a couple of other methods to prevent Microsoft Office 365 from updating itself:

The default is automatic updates when Office 365 is installed but you can turn it off or on from the Office 365 programs (Word, Excel, etc.) by using Menu | File | Account | Update Options | Disable Updates as shown in the screenshot below: 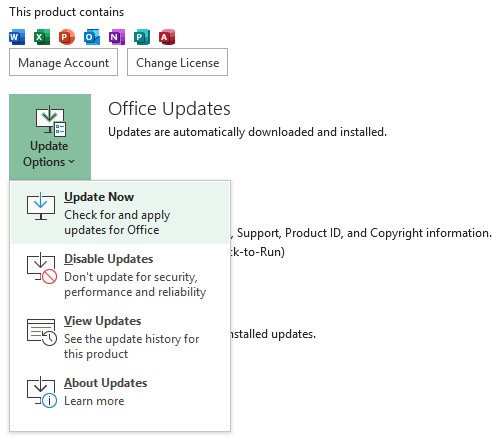 Microsoft Office CTR normally updates Office at least once a month. On my system it has been updated 15 times in the first six months of 2019.

FYI, the Microsoft version numbering is major.minor[.build[.revision]] e.g. 16.0.11231.20174. The build (the third sequence) is a recompilation of the source code so it automatically increments but the revision number (the fourth sequence) can go increase or decrease because it denotes a specific change which might be reversed. The GlassWire alert screenshot below shows a revision number reducing instead of increasing as we would normally expect. See the first alert: 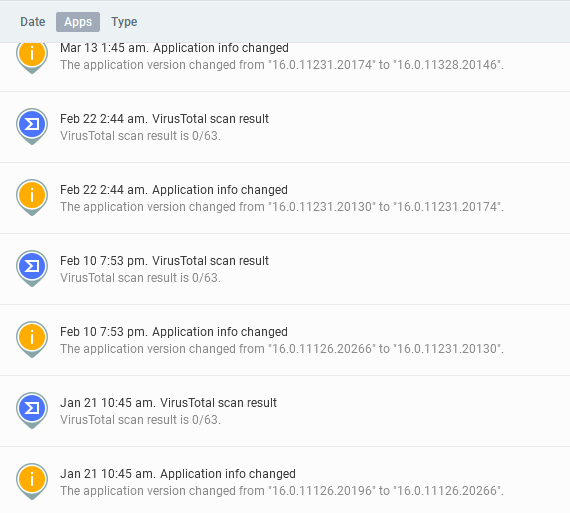 Also FYI, if you want to view the update history in Office then you are redirected to office.com to see a summary of changes rather than the specific update build.revision, e.g. https://support.office.com/en-us/article/what-s-new-in-office-365-95c8d81d-08ba-42c1-914f-bca4603e1426?ui=en-US&rs=en-US&ad=US

Microsoft Office CTR actually runs as a Windows Service (an application with no user interface) so it can also be turned off or on using the Services tab in Windows Task Manager.

This has the benefit of freeing up some system resources (memory and CPU time).

Perhaps the service can just be turned off as you recommend.

Perhaps the service can just be turned off as you recommend.

I don’t recommend turning it off except for non-corporate users to delay updates so they fit our timetables rather than taking them whenever Microsoft pushes them. Microsoft already provide corporates with the means to do this to manage the introduction of new features.

If users don’t want the updates at all then they should be using standalone Office instead because it only provides security updates. Office 365 is for users who want regular feature updates. What's the difference between Office 365 and Office 2019?

Learn about the differences between an Office 365 subscription, Office 2016, and the free Office Online apps.

Sorry, I should not have used the word “recommend” since you did not necessarily recommend it, but thanks for mentioning that it’s possible.

I agree and I would personally not turn the service off myself because it would be bad to miss a security update.