So I’ve used NetBalancer and NetSpeedMonitor before I got this but I really, really like the fact that both of those utilities show me data usage right on my taskbar rather than having a mini always on top window open.

NetBalancer goes a step further and also shows me what apps are using how much of the total bandwidth so I can kill an app if it’s using my bandwidth while I’m gaming or watching a video. 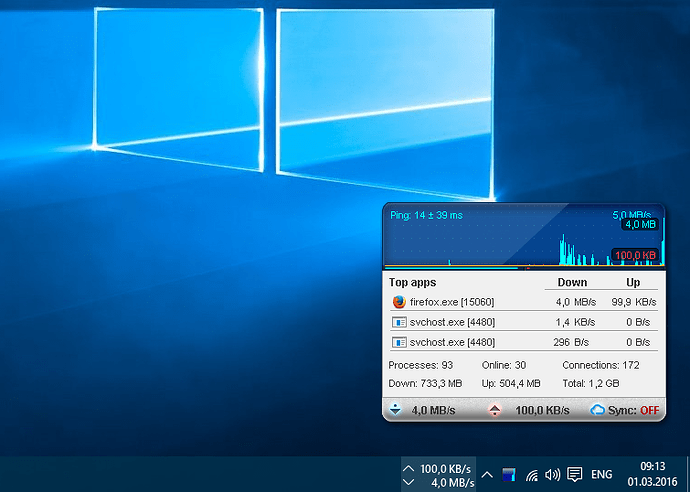 You are about to read some bad English. and I am really sorry about it. I am not a native English speaker.
Yup I really want this fetaure too Personally I really don’t like the glasswire mini viewer it doesn’t match the ui at all it is not even simplistic there are some bugs I have been experiencing with mini viewer for example it never truly stays on top It doesn’t know when too stays on top when too not

1. This is from net blancer I really like this one it doesn’t really interfere with anything at all and it is really simplistic and it matches the UI really well

2. This is from Networx it doesn’t interfere with anything at all but Its just too ugly

Plz make your taksbar speed monitor like these thanxx guys

Thanks for your feedback. We’ll check this all out.

Yes, this is really something I have been looking for.

+1 for a better mini viewer (showing the actual bandwidth usage) including taskbar integration.

This is one of the most important features I am missing from Networx, the app I have been using up until now.

Dear devs, could you please include this in your roadmap ?

Just in case anyone missed it GlassWire does have something like this for our paid version.
https://www.glasswire.com/buy/#Mini_graph

Although it’s not exactly identical.

Hey, thanks for the quick answer.

As a matter of fact I did pay for a basic license and I do like the mini viewer which, once resized, does show upload/download rates.

However, I would like to be able to hide this mini viewer from time to time and still get those upload/download rate values in the taskbar as suggested in the above posts.

Yes, that would be awesome !