My main MA04 computer has been running GlassWire 1.2.88 since that version came out. Today, I finally upgraded to GlassWire 1.2.88 on my MA03 computer and have had some problems with GlassWire remote connections between the two computers since doing that. They monitor each other.

I have rebooted both computers since upgrading MA03.

Every few minutes the GlassWire connection is disconnecting and reconnecting as you can see in the screenshot for the second problem.

I have the following enabled in Settings | Server | Remote Access:

This is the first time that I’ve managed to get a screenshot before it disappears - just because I happened to be watching the Alerts tab when it appeared. 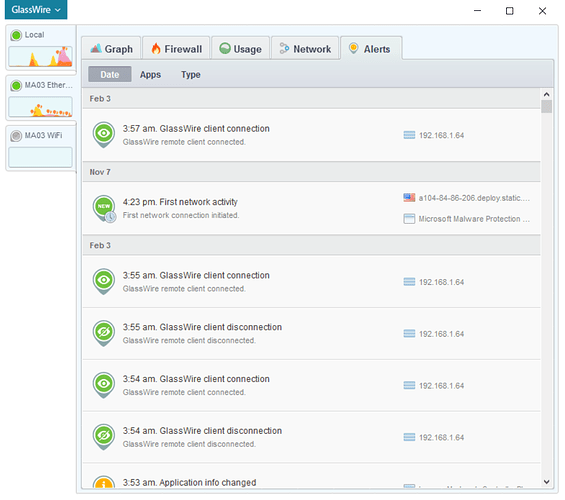 The problem has recurred for two alerts out of order in the MA04 view of MA03. But this time I also saw a similar problem at the same time on the MA03 view of MA04. I didn’t get the second screenshot because the connection was lost. 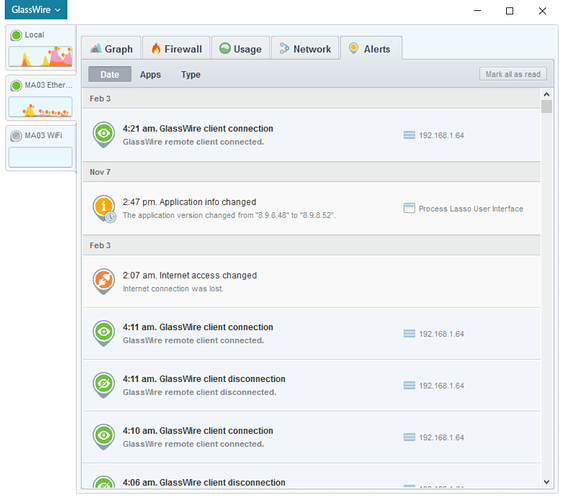 I’m guessing that you’ll recommend reinstalling and clearing all data/history.

Let me ask our team and see what they recommend here. We actually made a change to our next GlassWire update that causes it to make more frequent remote connections. I wonder if it will help you?

Let me see what the team says and get back to you.

They could not reproduce with the password + allowed IPs options. They asked if you are using the most recent versions of GW for both - clients and servers?

For the alerts appearing out of sequence they said this:

“I think this happens because of the disconnections/reconnections. Client receives the list of alerts then it gets disconnected and reconnected again. After reconnection it receives the alerts again. And probably the issue happens here. However I could not reproduce this myself. I’ve added this report to our trouble tickets.”

So, we’re trying to reproduce it and fix it in our next release. Thanks for reported these details so we can improve GlassWire.

Yes, I am using the latest version 1.2.88 on both computers. Previously I was on 1.2.88 and an earlier version and didn’t have any problem except for the port changing.

The out of sequence alerts makes sense to me.

We are making some minor changes to our next update that causes the remote connections to happen faster, so maybe that will solve the problem automatically if we can’t reproduce it. Sorry for the problem.

I spoke to soon.

We will have an update out Monday that makes some minor changes here. I hope it will solve your problem.

I installed GlassWire 1.2.96 on MA04 and it resolved the problem. MA03, which remained on 1.2.88 but had all history cleared up to that install, continues to have the problem so I will upgrade it to 1.2.96 and see if it goes away.

Edit:
Again, I spoke to soon. MA04 had no problem until I logged in on MA03. MA04 was displaying the correct bandwidth usage from MA03 and got no alerts until I logged into a user account on MA03. At that point, MA04 started to display the Remote client connection/disconnection alerts again.

That might give the development team a pointer but I’m not sure what.

The problem does not occur if I’m only logged in after restart on one of the two computers.

When the problem arises again, I can stop it by restarting one of the two computers and not logging into a Windows account.

@Remah
So, the problem is existing right now with the client and server using the latest GlassWire software? Please confirm.

If you restart the clients on the server and locally does it fix it?

The dual client/server configuration might be why I get the problem and why it stops if I reboot one computer and do not login to a Windows user account. Presumably there is some code that is not loaded or run until a user account logon.

Once I have logged on and the problem restarts, logging off does not stop it. I have to restart Windows to stop it.

We will try to reproduce this on our end. I have alerted the team to this thread and I’ll see what they recommend next.

Once I have logged on and the problem restarts, logging off does not stop it. I have to restart Windows to stop it. 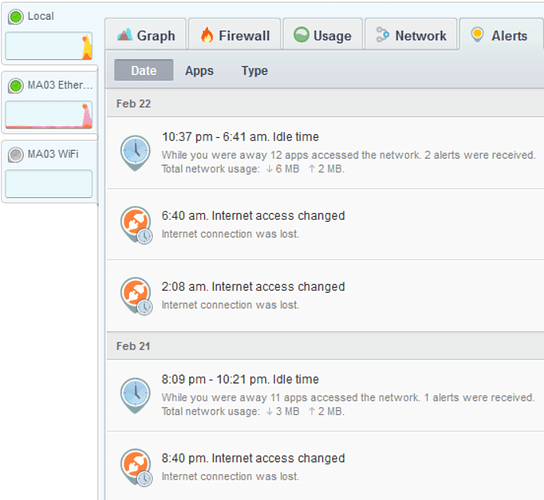 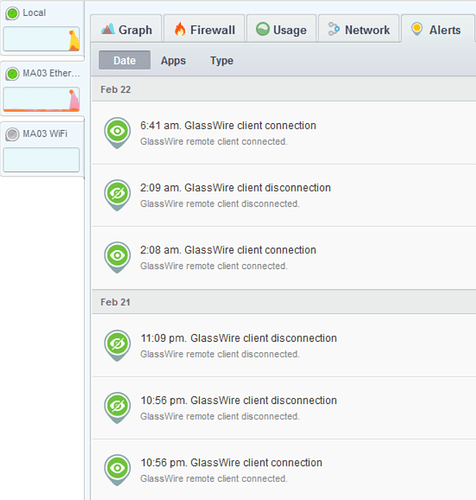 If I were to logon to MA03 then MA04 will start to show the same alerts for client connections/disconnections.

Here is what we tried below, and we could not recreate the problem. Please change these steps below so we can reproduce the problem.

We could not reproduce the issue according to these instructions. Then we removed the IP address of PC2 from the list of allowed IPs on PC1. The remote connection failed (as expected), but no problems were noticed.

That is the same for me.

When I get the time, I’m going to totally uninstall GlassWire on both computers and start again to see what happens.

I just installed and started to monitor a pc remotely. However, once it is lost the connection, it won’t reconnect to the pc. Instead of clicking connect button manually, can we do automatic reconnect within a few minutes like try to reconnect to in next 10 or 30 minutes? Thanks.

Thanks for your feedback. I’ll discuss this issue with our team about some type of “auto-reconnect” option.