Hi,
So recently I downloaded a 41 GB game from steam and when I checked my wifi usage for the day it showed that steam had used 74 GB of data.
The same thing happened with epic games where I downloaded a game of around 14 GB and it showed quite a bit more (I don’t remember the exact numbers)
Is there some settings that I need to change to make it show the actual data used? Or is this actually the amount of data used? 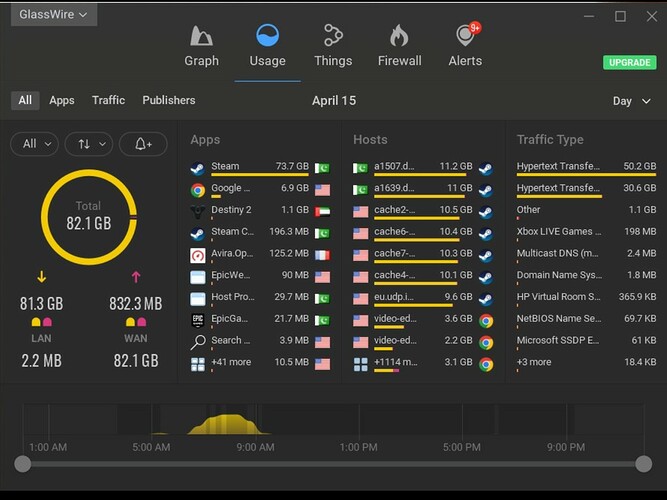 It’s not letting me put more than one ss in one go sadly.

Sorry for the issue.

If you go to the left menu that says “All” directly over the 82.1 GB circle and exclude LAN traffic, is the count correct for you in your opinion?

Is it possible Steam updated itself, or something like that?

Nope. LAN accounts for like 0.01% (31 MB out of 284 GB) of the total data used so that’s not causing the issue
Also I’ve turned off auto update for steam + I was watching the download and there wasn’t any update that I accidentally could’ve turned on.
I also downloaded a 400 Mb video from Google just to test this issue and my data usage for today went up from 2.5 GB to 2.9 Gb. So the issues isn’t with glasswire but with steam and epic games? Or maybe that’s just how games are downloaded

Our counting should be 100% exact. Here is a Blog post where anyone can read how our counting works, and how they can test it for themselves.