[Solved] How do I view my yearly history?

I’ve got the Pro package and either I’m completely blind or I just can’t find how I get GlassWire to show my yearly bandwidth usage. Each day it shows exactly one month back (7 oct - 7 nov, 8 oct - 8 nov, 9 oct - 9 nov etc.), removing all previous usage and graph data, even if I click the “Year” tab. I was also expecting it to show from the first day of the month to the current day without moving the sliders once I hit the monthly tab, regardless of which day it is.

But how do I view the usage history for a whole year?

I think you should look at the Usage page.

Thanks for upgrading to Pro. Please check the “Usage” tab, then click the “year” text at the top right. It should then show your year to date data.

Yeah, I did check the Usage tab. I got Pro on the 30th September. Here’s a picture from the usage tab: 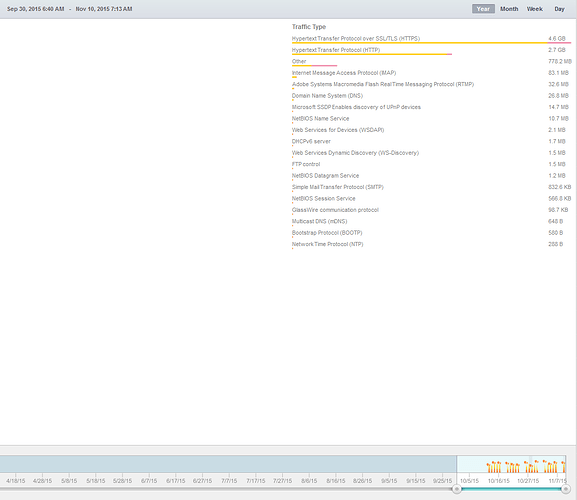 It should show from the 30th September and onward, but every day it deletes enough of previous data to only show a month back.I’m 100% positive that I’ve used more than 8.2GB of bandwidth in total since then.

Did you delete the data that usually appears on the left side, or does your Usage tab look like that currently?

The Usage tab looks like that currently. Yesterday I saw friday the 9th of October on there. Today it’s gone.

It has nothing to do with the fact that I enabled “Bandwidth overage monitor”? I told it to notify me at 15GB and put Time peroid to Month and Start day to 1st. Still, that shouldn’t delete anything.

Just to be sure I understand… you are not deleting the hosts/apps from your screenshot and it’s blank there on the left?

If so I recommend uninstalling/reinstalling.

I only have the Basic option so only 6 months of Usage is shown, but here is what my Usage display looks like. BTW, your snip only shows part of your Glasswire window. I could be helpful if you show the complete window. 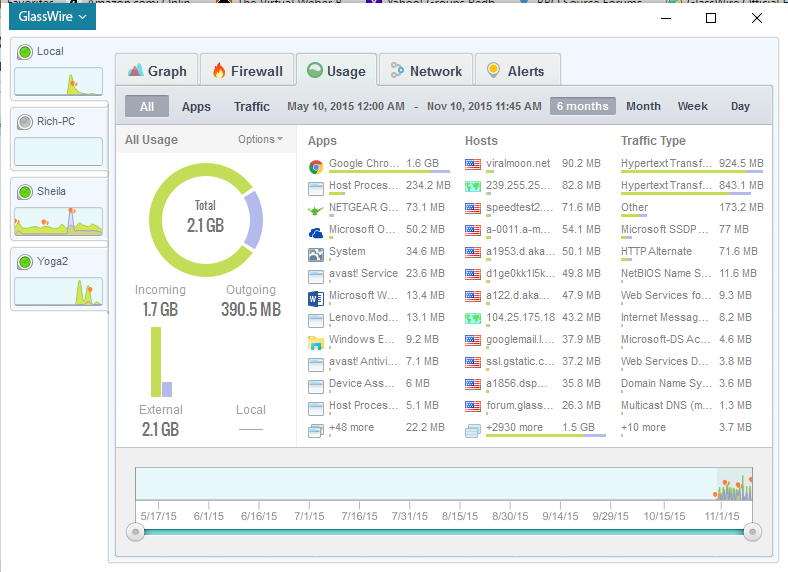 No, I deleted the hosts in Photoshop. Didn’t think it was of any importance anyway, but maybe I should’ve told you that in the post. Haha.

Well, I’ve been away for two days now, that’s why I couldn’t reply. Still got the same problem tho’. Here are two screenshots I just took: 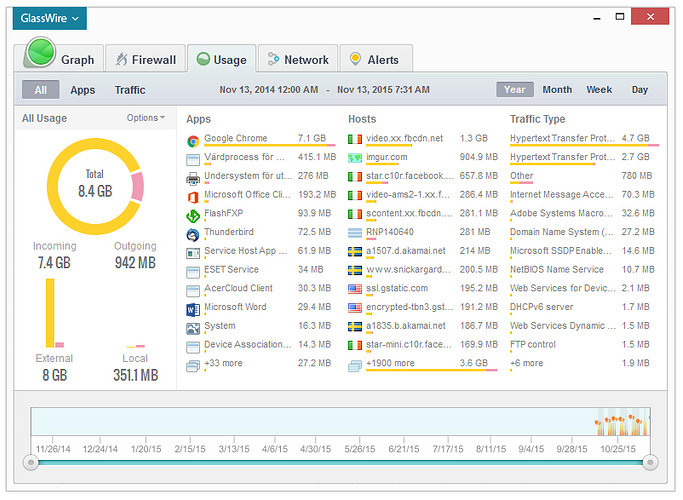 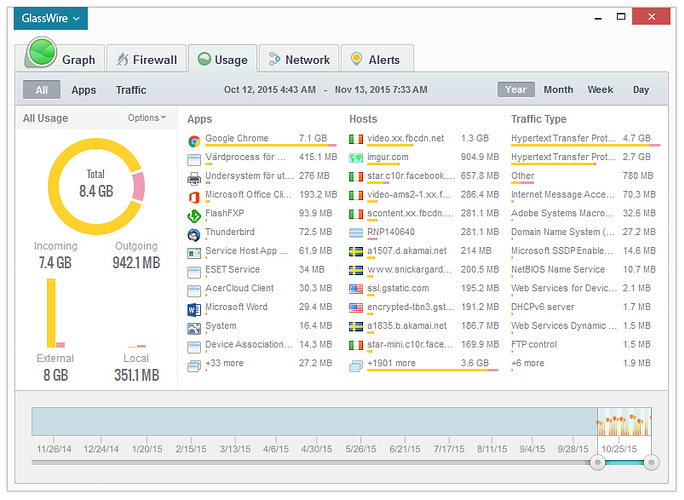 As you can see GlassWire has once again deleted previous data to only show a month back, if you compare to my other screenshot in this thread.

I notice that the slider at the very bottom of you screen shot is showing only a narow band (about a month). On my Usage display, if I move the slider al the way open, the dates at the top change change to reflect the period selected. With your slider in the current position, you will only show a month’s worth of data. Open it all the way, and I think it should show the entire period (and the dates at the top will also change).

Look again. The first picture shows the slider all the way open. I just wanted to show that it only shows a month back by pulling it to a month in the second picture.

Here’s some more proof, from today. Suddenly it shows 7.6GB. 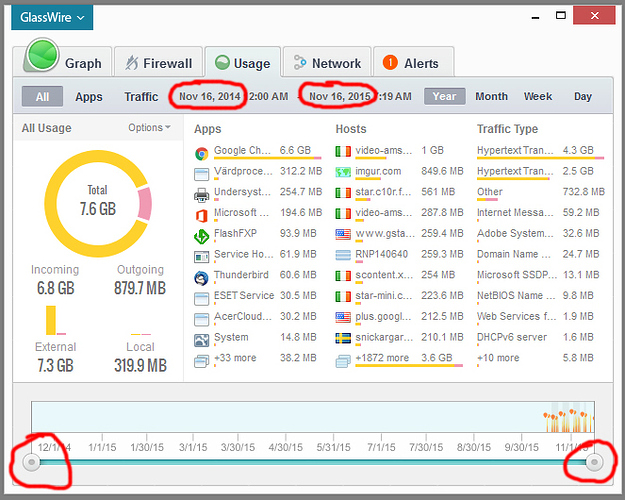 I really don’t get why GlassWire behaves like this.

We actually did a code review to see how this is possible and we couldn’t find any way GlassWire could delete its own history like this. Also we have never had anyone report this before.

Actually… immediately after posting this we found this bug! Thanks so much for posting this problem so we can fix it with the next release ASAP.

No problem! Thanks for looking into it. It baffled me for a while since there was no indication of any option or anything that did this.

A free update should be out around December 1.

I suspect that with a new release due in the near future, that it will be difficult to slip in new suggestions, fixes, etc. unless they are show stoppers. I was already planning to hold my suggestions for the next iteration, and this just reaffirms my thought.

The latest patch actually fixed it and now I see all of the usage data I thought was lost. Awesome! Thank you so much. 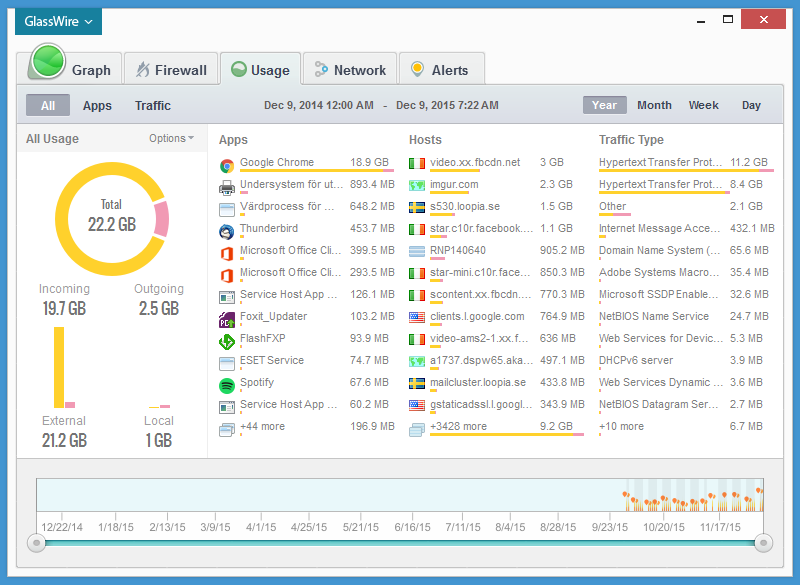 We’re glad the fix worked. Thanks for reporting this probem!