It was first install, reboot fixes this problem for now

I have a same problem on a Windows 8.1 tablet and Glasswire 1.2.96 Elite, after round about 2 weeks of continously running without reboot, Glasswire stops recording, reboot solves the problem for another 2 weeks, clean install didnt’t help.

If you disable network auto-scanning does it solve the issue?

To disable Network auto-scanning completely create a text file called glasswire.conf and place it in the c:\programdata\glasswire\service folder. Add this string to the text file: enable_network_scan = false then restart the GlassWire service. We plan to add a setting for this in the future.

Did you get a DMP file on the desktop that you could email to our helpdesk using a cloud service for the file?
https://www.glasswire.com/contact/

Thanks for the fast response.

in the service folder was a glasswire.conf, I have edit the line and that is now the content, is this so ok for the test, or should I edit anything elese?

And I don’t have a DMP file, because Glasswire is not crashing, it stops only recording and when I go to the “Grafik” tab, it shows only the 3 dots at the botom with never ending “loading” (or so) text.

The tablet has also no Nvidia graphic, only an Intel Mobile graphic.

Just editing the .conf file is all that’s required. Did it solve the crashing?

I’m actual testing, but I have to wait about 2 weeks, until the error may occur again, or hopefully not

Great, I hope it never re-appears!

Sorry, but after testing several things, Glasswire hangs again after 10-14 days continously running, the Glasswire Service is running, but restart it, solves the problem, but the data between hang and restart are lost. 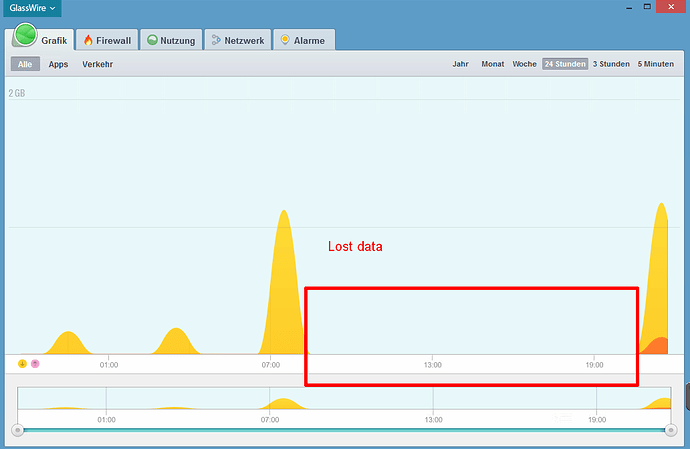 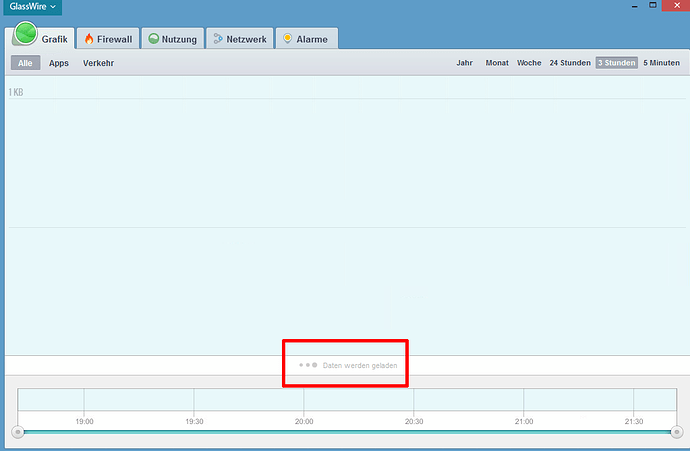 Or could it be you switch to “Incognito” mode in GlassWire?

I can not really imagine that, the tablet serves as a picture frame and on this just runs 24h gPhotoshow Pro on it, that’s it. Firefox is also installed, but used rare only for downloading updates and also Teamviewer.

Virus scanner and firewall are from Windows, so also no third party tools.

Incognito Mode was not switch on (sunglasses is missing) and also Glasswire from my main computer shows theese dots, when I remotly connect to the tablets Glasswire.

I have really no idea, what could trigger that.

Does the PC have much memory? Maybe it ran out and caused our service to crash? Just guessing.

Do you use any cleaning utilities? Sometimes they will kill services.

The tablet has 2GB of RAM and is on average 60-75% occupied sayed by the Taskamanager.

Is the driver history possibly a wrong track? Because the Glasswire Tray Icon is still colored and not gray, when this happened.

And no cleaning or tuning tools are installed.