Use Glasswire to disable all activity being sent to Microsoft

I find Glasswire very difficult to understand and use. When I go to settings/privacy etc. on my windows 10 piece of junk there is NO OPTION to stop sending activity to Microsoft as all the articles say there is. There are only options to clear history ie. my email.

So can I use Glasswire to disable my box from sending ANY AND ALL info to MS? Like if some app crashes I immediately get a message that that info is going To MS etc.

Along these lines I have disabled those invasive endless updates long ago but that played havoc with the machine so now I had to reenable them.

All the garbage Microsoft forces you to eat is ultimately installed to spy on you for whatever reasons and I’m sick of it.

For now though, can someone say exactly and simply, like talking to a moronic 3 year old , the precise way to get Glasswire to disallow any outgoing stuff to of any type to that giant evil corporation?

Simply, you can’t. As I am also just discovering, no matter what you set, Glasswire will always let certain Microsoft communications through.

Coincidently, on the bottom of their main page it states they are a Microsoft partner soo…

Time to move on to another application, even though their pages states you can control all traffic, it was a lie. I will be seeking refunds due to poor/false ads and no longer recommending it to anyone. You should as well.

Important: Unless you want problems with your PC and have to format in the future, do not use any “debloat” or “privacy improving” softwares for Windows 10 or 11.

You cannot block Microsoft’s urls and there’s nothing wrong with that. GlassWire does not block them because GlassWire hooks into Microsoft Defender. Certain URLs are permitted access, for things like Windows Updates, etc.

There is too much paranoia about things like telemetry. Telemetry is beneficial for handing things like crash dumps. Look at telemetry like this: You’re a software developer. People start telling you about problems in your software but are not the best at saying how to reproduce it. You attempt a bug fix and introduce telemetry. This gives you some extra information that is anonymous - such as what OS they’re using, if it’s up to date (think 21H1, 1903, etc for Windows 10), what .NET they have installed, the installed antivirus, firewall, and so on. You can then use this anonymous data to see what happened when the program crashed, and how to best fix it.

Something to keep in mind. Programs that claim to enhance Windows 10/11 often do things that break your system. Or worse, as recently seen - like the tool to enable Google Play was actually malware. There’s even fake Windows 11 upgrades that are true data thiefs - stealing browser data and any cryptcurrency wallet information.

Be smart and stay safe with all the real dangers out there.

Click on your Firewall icon at the top of your screen, then look over to the left and it will say Click to Block, click on it and it will bring down a menu with choices, click on the one that says Block All! Hope that helps!

Microsoft Windows is now a connected service. It needs access to the net and Microsoft servers to function correctly.

GlassWire does not have any host blocking or IP blocking features, just application blocking. Even if it did, blocking all Microsoft connections would be a bad idea.

If you don’t trust Microsoft, then you should probably be using Linux.

Windows won’t stop working if you unplug the Ethernet cable, turn off your router or your ISP goes dark.

Here’s the Windows and MS stuff I’ve blocked in GW since I built my i9-9900K/Z390 Win10 Pro primary (10 hours a day, 12-18 GB/month) desktop in Feb. 2020. My other systems pretty much the same. If blocking anything here that matters to your system, you’ll get some sort of alert at which time you can unblock it. It’s never happened to me. 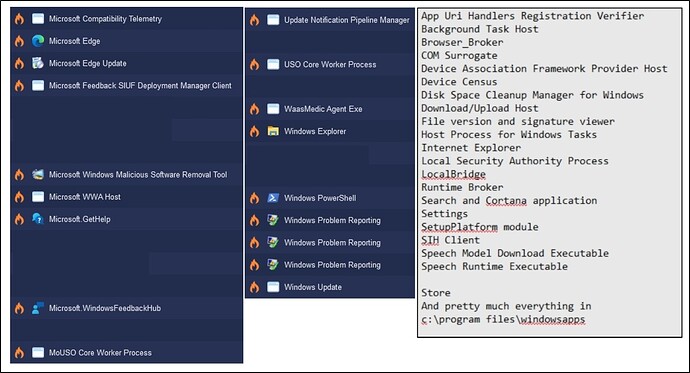 For those apps MS chose not to preface with “Microsoft” or “Windows,” I’ve listed them as text.

Many of these are LAN focused, having to do with syncing devices, files and share points, particularly in the enterprise (business).

Windows Problem Reporting: there are different process MS uses for that. I’ve had three of 'em run over time.

For the monthly Windows Update (aka Bork Tuesday), I turn off GW in order to return control to the Defender Firwewall ruleset.

Obviously, if you use Windows Apps, don’t block them.

As well, you can always unblock an app and re-block it if connectivity is needed. Like Power Shell or the Feedback Hub.

I don’t do (gag, choke) Edge. But if you do, you can disable its updater. Unblock, run, block returns manual control to you.

More control over your operating system

Add this to your hosts file. Not a complete list but will block most Windows telemetry stuff.

I understand that whining is not so much about spying as far as Microsoft is concerned. Yes you have direct links to MS but most of them are necessary to provide good service and do not understand that there are people who try to stop the updates. Why want to be safe, stop updates is only unsafe.

I am a Microsoft insider DEV and have never had any problems and yes my whole system is available to Microsoft, well, I have nothing to hide. I download cracked software except from Microsoft and Kaspersky to secure my system. Microsoft has never spoken to me about it. If I really want to be private, I use a well-secured Linux version on an external SSD drive. There are people who complain that Microsoft spies then they use Google all day and then also use Google chrome nice and smart about spying plus it is a system source eater because you are constantly being spied on. Google spies to sell all the info no matter what, Microsoft mainly uses it to improve its product. People don’t be so naïve nothing is more private nowadays even with a VPN. No I have no shares with Microsoft and pay for their products but think it is a beautiful operating system with many possibilities and convenience and yes that has a price but for me it pays off. For Google you also pay the price to use the search for free, a much higher price, if they can grab your medical data they sell it to insurance so that you can no longer insure yourself or you pay much more. If you really want to be a bit safe, use Linux in a shell with Linux commands. That’s a lot of work. I do that but as a hobby and work, game ect with Windows 11 Enterprise.

The problem I have with sending stuff to Microsoft is that you really dont know what exactly they’re collecting and how they’re using it. If we’re to believe they aren’t collecting out of malicious intent, they are probably collecting things in-line with what Apple collects, which is your current IP, MAC address, Wi-Fi names you’re connected to and possibly any other hosts on that network to include their IPs and MAC from your ARP table. None of this alone is malicious, but you can very EASILY track and map out complete networks world-wide with this, even tracking people on your network who can’t really consent since their data is sent as well.

At first glance this might seem like a far-fetched conspiracy theory, but it really isn’t. The NSA has created MASSIVE data centers for “data they are not collecting” which makes no sense. AT&T literally mirrors ALL their traffic to NSA servers for collection, just look up Room 641A.

Microsoft was the FIRST NSA partner back in 2007 according to leaked slides regarding PRISM, an NSA spying program which is currently on-going.

Public data that is being collected by trackers/apps is being sent to an NSA contracting company, allowing them to know your precise location with over 90% accuracy at any given time.

This is all just touching the ice berg. With Microsoft being an NSA partner, I am willing to bet everything I have that they do not disclose known zero-day exploits and allow the NSA to use them for implanting networks and people of interest.

My understanding is that you can turn off sending data to Microsoft without having to use a third party app. Details on how to do that are here.

Configure Windows diagnostic data in your organization (Windows 10 and...

Use this article to make informed decisions about how you can configure Windows diagnostic data in your organization.

A quick and simple command shell, save as something dot cmd (ie. EditHosts.cmd ) to make Hosts edit easy - turn back attributes after edits done