What is with these local network connection; should i be concerned that my network has been hacked?

It is your PC communicating with other devices on your network like printers, etc… and no I don’t think you should be worried.

Port 60000 is commonly for Mosh, a mobile shell. Google it. You should contact Brave to find out why the heck they’re using it. Its activity is in your local network and not out on the internet. IMHO opinion, it’s not a threat. As well, I’d never use Brave. IMHO.

Port 137 is used by NETBIOS which is not an internet protocol. It is best disabled and you can find out how to do that by Googling “disable NETBIOS” with the quotes and examine the hits for NETBIOS and NETBIOS over TCP/IP. However, as it does serve a purpose in some scenarios, even with an audit of your system, this forum is probably not the venue for determining if you should do that or not.

I became curious and did some more research and found in a Brave forum that this is expected behavior because Brave is based on Chrome, and Chrome searches for Chromecast devices on the network. Perhaps that is what is going on?

@dallas7 has some useful tips above though that may be useful if it bothers you.

if you install the free version of glasswire it will detect arbitrary devices connected to your network such as your home router and then tell you that your network is potentially compromised and you need to buy premium version to see what it is. this is a dishonest scare tactic designed to scare you into buying premium version - do not fall for it.

it will detect arbitrary devices connected to your network such as your home router and then tell you that your network is potentially compromised and you need to buy premium version to see what it is. this is a dishonest scare tactic designed to scare you into buying premium version - do not fall for it.

Below is a screenshot of exactly how GlassWire appears for everyone in Free mode. It has always appeared this way and has never used the word “threat” anywhere or tried to scare anyone. Anyone who uses the free version can go to “Things” and see your post is a lie. 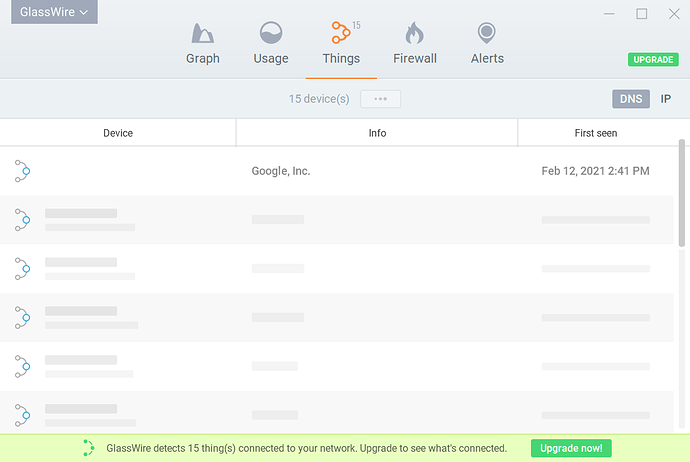 Look, glasswire is great - I am glad I bought it when I did. But the reason I did it was because of what I mentioned. There was nothing on my network, it was just my desktop and my router. Obviously glasswire implied there was “something else” so i got scared and went in. This was the sequence of events, if it happened to me then it is happening to many others. If you want to argue that glasswire is not threatening people into getting premium “to see what is there” because it is not doing it directly, then fine it is your right to say but that is the same as claiming you made no choice because you chose nothing but still not choosing to make this feature less threatening it was still a choice because i dont believe it you did not guess what would be the outcome you just thought nobody would be bold enough to call you out on it.

Just to be clear, we don’t imply anything or use the word threat anywhere and we never have.

I realize there really is software out there that says “you have X threats detected” and all kinds of scam garbage like that. It’s not fair to compare us to scareware like that, and we have never behaved that way.

Also, the person who started this thread isn’t even talking about our “Things” tab. They are discussing the local network connections shown in the firewall that anyone can access free or paid.

First of all I am not comparing anything to anything, that is something you said. I am not even lying. I am talking from my experience based on what I experienced - it was a scare tactic. That is how I experienced it. I use free version, see 3 devices, cant see what they are - OK. I buy the software and it turns out there is only one actual additional device connected which is my phone. Nowhere was it disclosed that glasswire will treat my pc as a device and my router as a device so naturally one would assume(because of lack of explanation and lack of information) that there is something additional on the network. Like someone stealing your wifi or otherwise compromising you and you get an impulse to go buy to see what is going on.

You can argue whatever you want even that I am crazy or whatever if you want to go that far, but fact remains - this was my experience and I am convinced there are others going through it - because you withheld information. If you simply advertised there ok if you pay you will get that feature - fine no problems, but you are showing an arbitrary number that is not even correct for what it is advertised to do(detect unwanted devices) and offering no explanation - yes it is a light scare tactic.

I felt manipulated into buying glasswire. That is a fact you cant deny. But still, glasswire itself is great. Love it!

arbitrary devices connected to your network such as your home router

Wow. Imagine my surprise when upon browsing the topics here and discovering my router has transformed into an arbitrary device.

It is arbitrary in the context of what the feature was advertised as - detecting unwanted intrusions in your network. Your router and your pc dont fit that context therefor they are arbitrary and useless to even see them as connected furthermore they are included in the count of “detected devices” in a free version but no information is provided about them making it easy to assume that indeed there is an intrusion - when in fact there isnt.

A network scanner is an age-old security tool. Things is a network scanner and it can be set to alert when an unknown device connects to your network. Otherwise considered as, drum roll…

detecting unwanted intrusions in your network.

So you have 2 pesky “arbitrary” devices. The Things icon value will jump from 2 to 3 in addition to the alert. Much like a alarm from a motion detector in the back yard can’t itself reveal if the alert is due to a scofflaw or neighbor Bob is drunk again, whether or not the new device is nefarious is for further discovery in other GW security features or other forensic applications. Much like for a motion detector alarm, checking a cam or looking out the window.

Additionally, say, for example, your arbitrary router name was NETGEAR and now it’s BOOGYWAH… something bad.

Or if your arbitrary desktop manufacturer is KulhDoodzPwnU from what it’s supposed to be… something bad.

Your ignorance of a network scanner’s core mission and your inability to understand the value of Things in the overall security scheme of GW’s feature set is equaled only by your crude writing.

In your witless “easy to assume” of GW’s marketing strategy in masking the Things data, you falsley accused GW of subterfuge and coercion. And in hijacking this thread about internet connections and expecting people to decipher your near-incohenrent composition, you reveal your self-righteous self-importance.

It is very obvious you made no effort to understand the point I was making. So yeah, why don’t you do that and then make a reply that is actually relevant to anything I said?

btw Brave is just fine in my view…safe and safe.

I don’t think there’s anything to worry about, looks just like devices in your LAN.

Thanks for posting, I found the information here useful!

i agree. thats why i paid for it.