Why does using a VPN double the data usage of my laptop?

So I ran into some network data usage issues. Basically, I tend to easily use up all my available wifi data, which is 1tb. I installed Glasswire to monitor my usage and I just realized, Nordvpn (the VPN I have) will use about the same amount of data as my programs (ie chrome).

I did some tests just now, I tried loading a youtube video for 1 minute. With VPN, both Nord and Chrome use roughly 15mb. Without VPN, same video, Chrome 15mb.

I did this test multiple times and they all have the same result: the VPN uses the (almost) same amount of data as the application (Chrome in my case). Currently, Nord is on 6gb and Chrome is on 4.6gb (Note that my laptop downloaded an update for Windows so Nord is slightly higher). 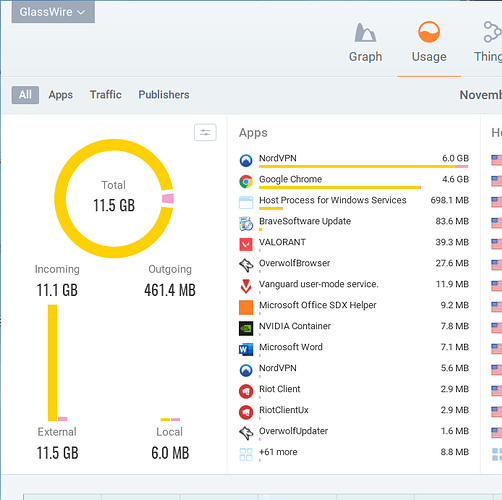 If I add all things up it will be about 5.5gb, roughly = 6. So the VPN uses the same amount of data as all other apps? Or is it a Glasswire visual bug? Does anyone have any idea?

Sorry for the issue. I know we did have a Nord account. We will try to reproduce this on our end.

If you go to our top left menu and choose “About”, what version of GlassWire do you use?

Is it possible Nord’s “Double VPN” feature is enabled?

NordVPN's Double VPN technology encrypts data not once, but twice. It's the tightest security in the industry that will ensure your peace of mind.

I just started using Glasswire, so it is the trial version. I do not have Double VPN on. To be specific, I am using their NordLynx protocol and CyberSec isn’t on.

I suspect it won’t prevent it from being counted towards the data usage but you can try clicking the icon of NordVPN in GlassWire, More and then “Add to incognito”.

I had the same issue, but using PIA.
Switching the VPN to ‘incognito’ worked, I’m seeing real world speeds again!
Thank you.