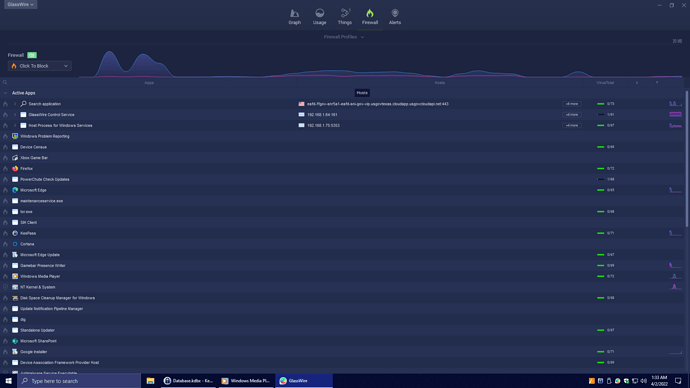 Very interesting! I’m not sure why it would do that. Maybe it has a built in option to search government data?

Too much missing context here to point the finger anywhere.

I only allow the Windows search to access the local machine, not the internet.

I use my browser for all internet searches.

I found the culprit, Tor Browser and I got rid of it! No problems so far! I have my search set to local only and I use MS Edge as my default Browser. Hopefully no more problems!

You can find the endpoint here: azure-content/azure-government-developer-guide.md at master · toddkitta/azure-content · GitHub

From my understanding. Microsoft and partners provide somewhat separated Office 365/Azure environments, among them US Government and China 21Vianet. For whatever reason your Windows Search wants to look for something in (presumably) Texas’ Microsoft provided cloud.

Sidenote: Sometimes GlassWire may show an incorrect hostname if the same IP was previously contacted using a different hostname. However, Microsoft’s US Gov cloud should be entirely separate from their normal cloud, so I think the IP addresses shouldn’t overlap.

I doubt this is related in any way to the Tor Browser. Only allowing it to search locally was most likely the solution.

Edit: Just remembered that I think I’ve seen my (not Chinese) Windows attempt to connect to China’s Azure, not sure about the details though.

Thank you, That more sense!

In the old days the phrase used to be, “Assume this phone is tapped”.

Contrary to what naysayers may say when they declare that if one has nothing to hide then there is nothing to fear, I still like to close my curtains in the evening. Privacy is a word we hear a great deal of now but there’s less and less of it around.

I laughed when I read this thread on possible government spying as in my mind I imagined one half of the population stating emphatically, “They wouldn’t do that!” while the other half screamed that government spying it is a matter of routine.

The most heard of program appears to be PRISM, but some have heard of ESCHALON, and while it’s sensible to take everything on Wikipedia with a grain of salt, consider the old adage of ‘no smoke without fire’. What you believe is your own business, all I am doing is offering these links for your perusal:

ECHELON, originally a secret government code name, is a surveillance program (signals intelligence/SIGINT collection and analysis network) operated by the United States with the aid of four other signatory states to the UKUSA Security Agreement: Australia, Canada, New Zealand, and the United Kingdom, also known as the Five Eyes. Created in the late 1960s to monitor the military and diplomatic communications of the Soviet Union and its Eastern Bloc allies during the Cold War, the ECHELON projec...

Global mass surveillance can be defined as the mass surveillance of entire populations across national borders. Its existence was not widely acknowledged by governments and the mainstream media until the global surveillance disclosures by Edward Snowden triggered a debate about the right to privacy in the Digital Age. Its roots can be traced back to the middle of the 20th century when the UKUSA Agreement was jointly enacted by the United Kingdom and the United States, which later expanded to...