Difference of about 5GB this month from glassware compared to actual.

I’m running Adguard VPN but it doesn’t seem to be affecting anything.

Is there something else I should look for, or try, to close the gap a little?

May I ask what version of GlassWire for Android you are using? Does it have a smooth graph, or lines like this? 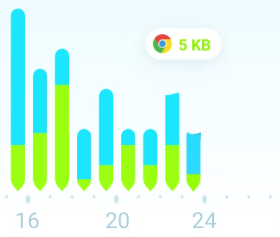 Also please note GlassWire tracks WiFi and Mobile data both by default. Go to the top right menu to choose Mobile only or WiFi only.

If memory serves me, the 6T had issues with mobile usage pre-v3 so I installed the beta which corrected that but I haven’t had much luck narrowing down the accuracy issue.

Edit: add that I have a mobile only plan set for my provider with the limit

Does your phone have any options for an OS update? Have you noticed this issue with any other data usage apps?

I’m on the latest OS and this is the first data usage app I’ve tried.

Please go to your graph showing “mobile” data only, then go to the bottom right three line GlassWire menu and choose “send feedback” with details on what’s wrong with the counting. This should auto-populate an email with our email address.

Please also include a screenshot of what your mobile provider shows if possible and make sure the same date/time is selected and is visible in both screenshots.

Please also consider looking at Android’s data usage figures in settings and include a screenshot there too if possible.

Thanks for your help and sorry for the issue. We use the phone’s actual data API that’s built in but we found that some phones have a bug with the Android OS itself that has wrong data but I haven’t seen this yet with OnePlus phones, only Samsung.

Is there a way to attach the images to the feedback mail?

Edit: I attached a Google photos album with a bunch of screenshots

Yes, it should be your standard Android email client.

How to take a screenshot on any Android phone

Once an arduous task, taking a screenshot is a snap—no pun intended—on modern Android phones. Here's how to do it on your phone.

Yeah I thought it was built in so I asked before I hit the send button. I didn’t realize it opened Gmail to finish. Regardless, I put together a Google photos album with a bunch of screenshots.

Thanks! We will try to figure out what’s going on here.

Hello
It happened the same to me (with mobile data only) when I updated from last year app version to the first beta for current release. What I think is when old version data is imported to new version during update, they are not correctly interpretated.
Try to check - if it is possible at all in your phone - if for a time frame of one day the data amount reported by GlassWire is the same or near the amount reported by your operating system.
Note: I can do this because MIUI has that feature concerning to mobile data only, not for wifi. I don’t know how OnePlus work.

I don’t think that applies. We’re talking a difference of 5GB during the current billing period.

I think I have found the source of problem. I use Adguard and it’s data savings is the difference from Android’s data usage compared to my providers usage. I’ve disabled Adguard for the rest of the period to see if the numbers start to match up better. It could be a coincidence but the numbers are close enough to warrant a closer look

So I have a Pixel 3 running A10 that I’m going to use to see if this is device specific. Already this morning it’s tracking the usage better then the OP 6T so I have a feeling this is could be the case. I’m running a 9GB difference in data usage from the device compared to the provider so far.

I want to run Glasswire on the pixel and my PC so I need to upgrade my license. How can I go about upgrading from basic to pro without paying the full amount? Pro lists 3PCs so does that mean 3 phones as well?

We don’t mention GlassWire for Android on our desktop software order page because Google Play currently has no way for us to use our activation codes there. We’re hoping to add some kind of system that links this all together in the future.

Google asks for 30% of developer sales through Google Play so they don’t make it very easy to use your own system for payments.

Ah jeeze, that’s a fat tax. How should I go about getting a license to cover 2 phones and 2 computers?

For Google Play you’d just pay $4.99 a year, so it’s around $.20 per month. You just use the same Google Play account on both phones and you only have to pay once I believe.

I’ve been running the Pixel 3 and the usage reporting is normal. Looks like it’s device specific to OP 6T. I still haven’t factory reset back to stable but that’s next.

Try to update the OP device. Perhaps there is an update that fixes the bug with the API we use.

We have seen this issue on some Samsung phones but we found if the customer updates the phone it solves it. Unfortunately though I believe some of those phones do not have any updates available while others do.

It’s on the latest beta already.